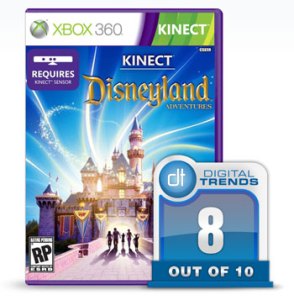 For anyone that has kids, spends time with kids, or even just remembers being a kid, the properties of Disney have made an impact on their lives. It is unavoidable — Mickey Mouse and his cohorts are iconic, and their presence can be found around the world regardless of race, creed or geographic boundaries.

The Disney franchise has decades of history, and even today continues to churn out new properties, thus guaranteeing another generation of fans. Even if you hate Disney, it is hard to deny the appeal that a place like Disneyland. There is something for everyone, and the company has been masterful in creating the Magic Kingdom, a place for families to steep themselves in the lore of the company’s mythology. But while it is a place that continues to be a destination location, it isn’t a place that most can justify going to often. That is where Kinect Disneyland Adventures comes in.

The game is a realistic portrayal of the real Disneyland, crossed with the fantasy that people have created in their own minds around it. It really is designed more as an experience than a game. The game is an idealized digital recreation of Disneyland that is loosely accurate to the real place, with eight zones including places like Futureland, Mickey’s Toontown, Adventureland and more. Each has its own theme, complete with famous characters that match that theme.

When you first begin, you are greeted by Mickey, as well as your guide that helps you figure out what to do and where to go. Once you have had a brief explanation of what is going on, you are then tasked with several mini-quests that introduce you to the various characters and locations found in Disneyland. As you complete objectives for characters, you will inevitably be brought to one of the 15 challenges, all of which are based on famous rides and properties, so things like the The Haunted Mansion and Matterhorn appear along with Alice in Wonderland and Winnie the Pooh.

The challenges typically have multiple games within, and they range in quality. Some are simple movement games where you must mimic the on screen movements, while others are a bit more involved and require you to do things like avoid obstacles as you fall down the rabbit hole. They vary in challenge and quality, but the menu allows you to pick and choose the events you’d like to participate in at any time if the guided tour isn’t appealing to you.

While the games try to present themselves differently, there is a clear favorite in terms of gameplay. There are a few original game modes, including things specific to Disney’s properties like pointing a flashlight at ghosts in The Haunted Mansion, but the most common game will have you dodging obstacles as you fall, slide, or otherwise travel downwards. These games will be great for kids, but it will quickly feel like more of the same for adults. Beyond that the mini-games are nothing new for Kinect fans. The tracking is good but has a few sluggish moments like all Kinect titles, and the games are simplistic. A two player mode is available as well but you’ll need plenty of room.

But then again, this game isn’t made for adults. Several of the missions in the park itself will be basic fetch-and-carry objectives as you follow a guided path to pick up lost items or talk to other characters. They are simple and repetitive, but they also expose you to the various areas of the park itself at a decent pace.

A more cynical person may see this game as a giant ad for the Magic Kingdom, especially when you run into park information people who are there to pass on facts about how awesome Disneyland is, but again, this game is made for kids.

In terms of a game — just in terms of the gameplay — Kinect Disneyland Adventures is a fun and decent, although deceptively repetitive game that is able to hide the repetition through solid presentation. But for kids who are still at the point where they can revel in the magic and wonder of Disneyland, this game will make owning the Kinect worthwhile. It hits on all the proper notes that will make this game feel immersive, and while older gamers may not be as captivated by the gameplay, the nostalgia should still be there for them too.

Kinect Disneyland Adventures may not be the best Kinect game out there, but it is one of the best overall packages. The technology opens up a massive world to explore that is steeped in decades of history, imagination, and fun that Disney has helped create. If you can’t book a trip to California or Florida, Disneyland Adventures isn’t a bad alternative.

[Updated to correct a typo]