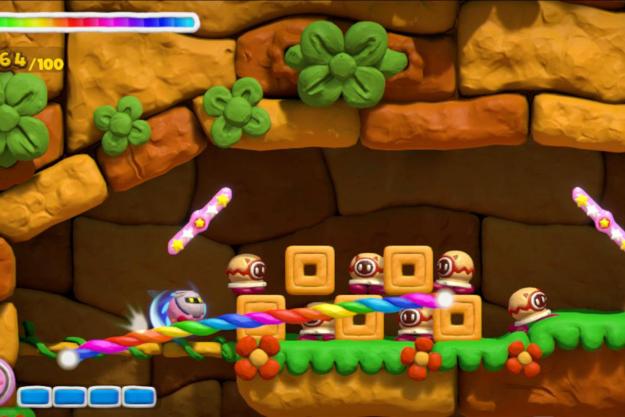 “Kirby and the Rainbow Curse is a weird and beautiful game, but it's an odd fit for the Wii U.”

Like a pink, amorphous Nostradamus, Kirby foretold the birth of mobile games.

When Nintendo launched Kirby: Canvas Curse for its DS handheld in 2005, it was a revalatory moment. Using the device’s stylus and touch screen, players guided the globular hero around by drawing out a path that pulled him along, no D-pad needed. The iPhone revolution was still two years away, but little Kirby got there first. Now, a full decade later, Kirby and the Rainbow Curse brings that line-drawn thinking to a much larger screen.

Sort of. It gets a little weird.

Kirby and the Rainbow Curse may be the world’s first mobile game that you can only play at home.

Rainbow Curse may be the world’s first mobile game that you can only play at home. Bound to the Wii U, and requiring the console’s touchscreen-equipped GamePad to play, Kirby’s latest adventure follows the same player-sketched path as its 10-years-gone predecessor: Draw lines to make the little fella move around, grabbing stars, sparkling food items, and other baubles as he avoids or rams into a wacky bestiary of Nintenemies.

It’s as satisfying as ever, if oddly out of place as a Wii U game. All of the essential play in Rainbow Curse is relegated to the GamePad’s touch screen. The action is mirrored on your TV, and its claymation stylings look gorgeous in motion, like Yellow Submarine rendered in Play-Doh. But your eyes are always cast downward, attending to the moving stylus as it summons thick strands of rainbow rope into existence. The TV’s larger screen is simply a distraction.

Your GamePad-sized window into Kirby’s world doesn’t diminish the simple joy of drawing lines to navigate trademark Nintendo platforming puzzles. Beefy strands of rainbow rope create temporary paths for Kirby to roll along, but that’s not the end of it. The rope doubles as a barrier, halting the pink hero’s forward momentum or shielding him from danger. Rockets and bombs explode against its rainbow strands, and straight lines carve a safe path beneath thundering waterfalls.

Kirby is always in motion, regardless of the dangers ahead. You can prod him to go faster with gentle taps of the stylus and reverse his course using rope barriers, but he never comes to a full halt. This sensation of non-stop movement serves to ratchet up the tension, as there’s always another danger to ward off, another bottomless pit to bridge. Much like Kirby, your eyes are constantly on the move, rubber-banding around the little guy as they hunt for threats.

The worlds, beautiful as they are in virtual claymation, are still classic Nintendo. Kirby starts out in a four-part world of rolling, green hills, a gentle introduction that mirrors the early Grass Lands stages of Super Mario Bros. 3. The sense of familiarity carries on throughout, from sandy deserts to bubbling seascapes to high-flying cloud palaces.

Its claymation stylings look gorgeous in motion, like Yellow Submarine rendered in Play-Doh.

There’s a loose structure to it all built, once again, on familiar Nintendo turf. Four levels per world; the last one is always a boss fight, and the third typically sees Kirby transform into some vehicle or another. A rolling tank, a torpedo-spitting submarine, and a bouncing rocket all require a fresh approach to familiar controls, whether it’s taps to target enemies and destructible blocks with tank shells or rainbow strands that carve a path for torpedoes to follow.

The first four worlds amount to training wheels, introducing basic concepts alongside a gently ascending difficulty. The final stretch roughly mirrors the game’s first half, but the levels are more crowded with enemies and obstructions. There’s a definite ebb and flow to the pace all throughout, with even the most challenging levels offering leisurely stretches between the harder bits, but leisure time for gathering stars, treasure chests, and other collectibles becomes an increasingly precious commodity during the later stages.

A Challenge Mode offers bite-sized puzzles that unlock as you progress through the story mode. Each Challenge room distills the core experience, ditching the story’s ambling, uneven pace in favor of time-limited exercises that test skills in extreme scenarios. Like many of the collectible hunts in Rainbow Curse, self-satisfaction is the only real reward for completing a Challenge room. But there’s enough here to sate the appetites of players that finish the story and are hungry for more.

There’s also a cooperative option inside the story mode that allows up to three players to jump in as spear-wielding, bandanna-wearing Waddle Dees. This is the only moment in all of Rainbow Curse that sitting in front of your TV becomes a necessity. The Kirby player continues to wield the GamePad, same as usual, but the (up to) three Waddle Dees use much more traditional platforming controls. Co-op is a cute, party-friendly diversion, but the introduction of more conventional play robs the game of much of its charm.

There’s a delightful simplicity in Kirby’s grand adventure to restore color to the world – that’s the gist of the story, by the by – that belies the punishing challenge at its heart. That core virtue of every successful mobile game is what propelled Kirby’s first line-drawing adventure to greatness, and it does so again here. Kirby and the Rainbow Curse is weird and beautiful, yes, but it’s also confounding as a Wii U release. The little pink blob of joy saw the mobile revolution coming two years before it happened, but his continuing adventures are an odd fit on big screens.

The best free-to-play games for 2022
Elden Ring’s first significant post-launch content is a PvP Colosseum
The best Android games available right now (December 2022)
All cross-platform games (PS5, Xbox Series X, PS4, Xbox One, Switch, PC)
Best Gaming PC Deals: Save on Alienware and HP
Gears 5 is only $5 at Best Buy right now — hurry!
‘Wordle’ today, December 8: Answer, hints, and help for word of the day (#537)
The best Nintendo Switch exclusives of 2022: 9 standouts from the console’s banner year
The best live service games of 2022: 10 ongoing games we couldn’t stop playing
Save $59 on the Xbox Series S, with delivery by December 24
Marvel’s Midnight Suns hero guide: every hero explained and ranked
How to order the PS5 (with disc drive) for delivery by December 24
The best places to land in Fortnite for Chapter 4