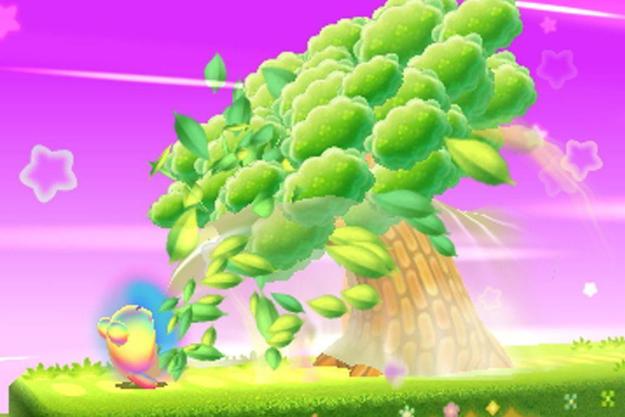 “Kirby Triple Deluxe is an approachably frivolous game on the outside, but it's hiding an expertly engineered, hilariously weird game within.”

Way back when he first puffed his way onto Game Boy in 1992, Kirby made a lasting impression. The puffy mascot and his implacably innocent demeanor put a soft spin on Nintendo platform games. Full of imaginative refinement but devoid of the nail-biting challenge of Super Mario Bros, Kirby’s Dreamland could be finished in just half an hour. The very first commercials for the game even joked about Kirby’s lightweight status, a reputation that’s stuck in the decades since. Thing is, every Kirby platformer that’s followed the original has been tricky to conquer, as full of secrets and thorny obstacles as they are with boisterous cartoon creativity. Kirby Triple Deluxe for Nintendo 3DS may not be the pinnacle of the Kirby series, but it fully embodies that spirit: an unassuming, approachably frivolous game on the outside, expertly engineered within.

As tends to happen to old Kirby, his quiet little life gets all jacked up at the beginning of Triple Deluxe – this time by an enormous stalk that sprouts out of the ground beneath the pink fella’s house and reaches for the sky. A little six-armed dude named Taranza, responsible for the sudden arboreal phenomena, swoops down to the neighborhood and kidnaps King Dedede, the obese penguin with a penchant for hammers who’s alternately Kirby’s nemesis and partner. Being a neighborly sort, Kirby dashes up the beanstalk to save Dedede and explore the wacky islands supported in its upper branches.

Six islands wait up the stalk, from a lava-spewing island of volcanoes to another full of grass-covered temple ruins. Each island is broken into a half dozen or more stages where Kirby has to jump, fly, and suck up enemies until he reaches the goal. Even structurally, Triple Deluxe is deceptive. The islands come off as token video-game worlds themed around the elements: the usual mix of fire, ice and earth levels. Kirby is no stranger to those tropes, but Deluxe gives each one a smart twist. The second island, for example, looks like its rolling hills are made of pastries, similar to the sort in Kirby’s Epic Yarn. In a haunted circus tent, ghost enemies can’t be seen in the foreground of the screen, and even spike traps, walls, and platforms are only visible reflected in a giant mirror in the background. The effect is disorienting but cool, and even makes spectacular use of the handheld’s 3D effect.

Triple Deluxe is full of one-off stages that defy expectations of what waits within, and flourishes that take impressive advantage of the 3DS’ oft-forgotten stereoscopic features. Giant spring-loaded hands pop out of the background to smoosh Kirby against the screens, giant trains roll down tracks aimed straight at the player. Effects like these add to the experienced without distracting; they never feel thematically divorced from the stages themselves and providing smart hurdles between you and the goal at the end of each stage.

Kirby’s also well equipped to survive his journey up the stalk. As usual, Kirby can suck up enemies and swallow them, but some enemies can also give him one of 25 abilities. Swallow a little knight carrying a sword, and Kirby will doff a little green hat like Link from The Legend of Zelda and carry a blade – a classic from the earliest Kirby games. Some of the new ones are pretty freaky, though. Swallow a clown and Kirby gets the “Circus” ability, where he can pop balloon animals to kill other enemies, or set himself on fire by jumping through a flaming hoop.

Why can Kirby get bizarre, dangerous circus abilities? Who knows, but that sort of non-sequitur is a regular occurrence in Triple Deluxe. Charming weirdness abounds. Another of Kirby’s new abilities in Triple Deluxe is Hypernova. Swallowing a giant glowing seed off the stalk will cover Kirby in glowing rainbows. Once he’s Hypernova-ed up, Kirby’s sucking ability goes nuts, letting you suck up not just regular enemies but entire forests. Rather than turn these chunks into orgies of destruction (though there’s plenty of opportunity to tear things up in Hypernova), the seed is usually paired with fun puzzle-like challenges. At one point, Kirby runs across three giant birds and the only way to beat them is by using Hypernova to suck giant turnips out of the ground. The turnips are so huge and heavy, that they arc through the air and you have to perfectly time sucking them up so they hit the birds. Ridiculous, tricky, but never frustratingly so.

This relaxed learning curve elevates Triple Deluxe above more recent Kirby games like Epic Yarn or Return to Dreamland on Nintendo’s Wii. It’s only a mild challenge to get through the stages and survive. The real challenge is finding hidden Sun Stones as you go. You’ll find as many as four hidden in each stage, and 100 in total. A handful are required discoveries, since you need to find at least a few to unlock the bosses waiting at the end of each island. Finding all of them, though, unlocks new levels on each island.

Getting them is tricky business, though. Some of them are hidden in plain sight, waiting in a treasure chest, while others require you to save just the right power up from an enemy to solve a puzzle. Find a hidden door in a stage and it may lead to a cannon with a broken fuse. First you need to find a fire enemy to light the fuse, then get in the cannon, then physically tilt the Nintendo 3DS to move a rock and fix the fuse. (The motion controls also deserve special praise. This may be the only 3DS game where the gyroscope controls aren’t awful.) In previous games, levels were too drawn out to make finding and solving these little puzzles any fun, but Triple Deluxe is perfectly paced.

Nintendo 3DS is already rich with decent platformers, from Rayman Origins to Yoshi’s New Island. Triple Deluxe isn’t flashy enough on the outside to distinguish itself from these peers, or even earlier Kirby games. It looks soft. Inside, though, is a beautiful, imaginative game. While it ultimately feels like an extension of what’s come before, particularly 2011’s Kirby: Return to Dreamland on Wii, it’s also a better game.