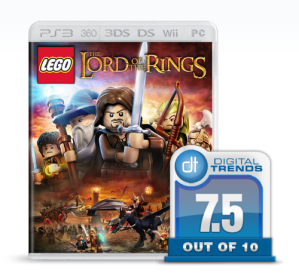 The LEGO world has changed. You can feel it in the earth of LEGO Lord of the Rings, though given the limitations of video game technology, you can’t quite smell it in the air. What once was lacking in Traveller’s Tales indomitable series of block-based film adaptations has been recognized and accounted for. This is in many ways the best LEGO game yet, held back only by some unnecessary padding and an unusually strict adherence to the source material.

Much like the Star Wars, Harry Potter, Pirates of the Caribbean, Batman, and Indiana Jones LEGO games, Lord of the Rings is predominantly a retelling of the film series, with a smattering of deeper lore tossed in for diehard fans. Those Tolkien-ites still hankering for a dose of Tom Bombadil will find him here, yellow boots and all. The big beats of the game have you play through the iconic (and some not so iconic) action sequences from the movies. When you fire it up you’re thrust right into the great battle pitting humans and elves against Sauron and his orcs, complete with the same towering, mace-wielding Lord of the rings himself smashing his way through the hordes. Rather than play out like Peter Jackson’s legendary prologue from Fellowship of the Ring, LEGO throws you into the shoes of the last king of men, Elendil, and tells you to cut on Sauron for a while before the story moves forward.

That’s par for the story action in LEGO Lord of the Rings. From that moment all the way to the climactic scene up on Mount Doom, the game has you slice up orcs and solve simple puzzles to experience the story. Traveller’s Tales has always been adept at creating simple, satisfying cause and effect puzzles to punctuate the base button-mashing fights, and this game has them in spades. Need to get rid of that pesky cave troll? First you need to build a little hobbit hole out of fallen blocks to get to the platform above so you can jump on the scaly creep’s back to stab away.

Lord of the Rings manages to break the LEGO games’ bad habit of overly long story levels too. The stages in LEGO Batman 2 could drag on forever, turning a small pleasure into a grueling slog. That’s especially good since a handful of the story levels are only entertaining in small doses. It’s an amazing moment at the end of Fellowship of the Ring when swarthy warrior Boromir snaps, attacking Frodo for the ring, but it’s not enough to stretch into an extended crawl through the woods where Frodo needs to knock down trees to get away. Levels like that are just long enough to avoid being obnoxious or noisome to replay, something you’re going to want to do regularly to get the most out of game’s real pleasure: Middle-earth.

The entire game takes place in a LEGO-ed up version of Tolkien’s fantasy Europe, but it’s in the passages between story levels when you actually get to wander around the countryside of the Shire, Rohan, and even Mordor. The LEGO games have always provided hubs to explore for the extra blocks and characters to earn for the game’s Free Play modes—most story levels’ best secrets can’t be accessed without a particular character or tool—but they’ve always been limited at best and broken at worst. LEGO Harry Potter’s Hogwarts was pretty empty and yet cramped for a place that’s supposed to be full of magic. LEGO Batman 2 attempted to create a more open world for players to explore, but its Gotham City was so cramped and repetitive that navigating it was a chore, and it didn’t help that there weren’t many fun diversions beyond unlocking various heroes and foes. The sprawl of Middle-earth, on the other hand, blooms as you plumb into the game letting you explore to your heart’s content.

There’s so much to find too. Each new area you arrive in has a map stone that you can fast travel too and, once activated, reveal the general location of nearby sidequests, collectible silver bricks, and blacksmith designs. Those three things feed into each other nicely. In order to trigger most sidequests, you need special tools or characters. Only Gimli the dwarf can crack big rocks, for example. In order to get new tools, though, you need to find their schematics as well as silver bricks to make them with. Once you have the goods to go on a sidequest, you can go back into story levels to find the items locals have lost. One goodie leads to the other, and the reward is more things to do in an eminently playable game.

Some silver bricks can be earned out the gate by finding them and triggering little mini-games. Maybe you’ll see some shooting targets in an open field near Hobbiton, for example. Later on, you can come back with Legolas to shoot them down. Maybe you’ll find a little wheel near a pond where the map says there’s a brick. Activate the wheel and a little battle with toy boats triggers. LEGO Lord of the Rings isn’t quite The Legend of Zelda, but the sense of discovery and expansion in exploring Middle-earth captures that same bucolic joy, which is a big change for the LEGO series. The only problem is that your access to it is slow to unlock through the process of playing and replaying story levels and buying new characters with collectible bricks. The open world is so great that you wish you could just play that rather than the narrative missions.

If there is one significant flaw in Traveller’s Tales’ adventure, it’s the insistence on hewing exactly to the story as laid out by Peter Jackson’s movies. Like LEGO Batman 2, Lord of the Rings abandons most of the silly, silent pantomime storytelling of older LEGO games, opting for voiced dialogue instead. The problem is that the dialogue is literally lifted straight from the movies, to the point where some of the background noise in certain scenes can be heard when LEGO characters are talking. It’d be easy to overlook the awkward sound if the dialogue weren’t so grave and serious, which is especially jarring when coupled with attempts at LEGO series style humor. You can’t use the audio of an anguished Gimli weeping while turning a Viking funeral for Boromir into a slapstick comedy bit. The humor and the drama are both ruined.

Awkward storytelling isn’t a big hamper on LEGO Lord of the Rings. Story is tertiary in this series. These games are carefully crafted virtual toy boxes that let you explore and prod at the edges of stories you’re already deeply familiar with, and this is the most fully realized toy box Traveller’s Tales has built to date. With a little more polish and a little more freedom to explore the world up front, the formula founded with 2005’s LEGO Star Wars will be perfected. LEGO The Hobbit may nail it, but in the meantime, this is a noble effort.