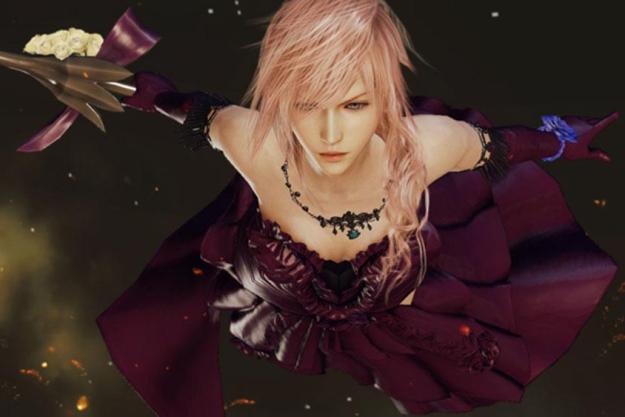 “While it’s got some good ideas, a weak story and lack of design cohesion are the biggest sins committed by Lightning Returns: Final Fantasy XIII.”

Lightning Returns: Final Fantasy XIII is a testament to Square Enix’s perseverance, if nothing else.

Once again attempting to appease disappointed fans, Lightning Returns is the murky product of those mixed messages. It’s the poster child for disproving the adage that the customer is always right.

Lightning Returns picks up 500 years after Final Fantasy XIII-2, with the events of that previous game having changed the world in odd ways. Nobody ages anymore, nor do they give birth, though their immortality can still be broken by disease or other unnatural means. After 500 years of this existence, the world is finally coming to an end.

It’s an original premise. The world’s end isn’t some horrible danger to be stopped, but an inevitable event that will take place so that the god Bhunivelze can create a new world to replace the old one. To that end, Bhunivelze revives Lightning and charges her with traveling the world and saving the souls of people she encounters so that they can be revived in the new world. In return Bhunivelze will resurrect Lightning’s sister, Serah.

As promising as it is, the plot is ultimately used more as an excuse to fit in cameos from all of the major characters in Final Fantasy XIII and Final Fantasy XIII-2. The obvious fan service ploy is distracting, to say the least. The story’s best moments tie the various characters together in a way that feels forced and convoluted. At worst it is little more than poorly explained gibberish.

Combat is at least a highlight, replacing the party-focused Paradigm system of FF XIII/FF XIII-2 with the new outfit-based Schemata system. The center of each schemata is Lightning’s clothing, with different getups acting like traditional classes by boosting certain stats, offering passive abilities, and coming pre-equipped with certain attacks and spells. If you’re familiar with the combat system from Final Fantasy X-2, it’s not far-removed from that.

The biggest change moves attacks and spells from automatic actions to player-selected options mapped to the four face buttons on them. You can use a schemata’s abilities unless the ATB bar is filled. It’s a system that gives players more responsibility to use the right abilities in battle, and can give way to powerful combo attacks by chaining hits while switching between schemata.

Despite the newfound freedom to precisely orchestrate your attacks, combat also feels more limited in Lightning Returns than it did before. Battles depend entirely on staggering enemies by exploiting their elemental weaknesses or using a guard ability at just the right time to deflect an attack. The reliance on this single tactic discourages experimentation with different outfits, and makes some of the more interesting outfit abilities impractical. Comparing different outfits is also cumbersome due to the fact that there’s no way to have same gear equipped to multiple outfits at the same time.

As rewarding as the combat system is, battles in general feel rather superfluous in Lightning Returns given how the game is structured. You don’t actually gain experience or level up through combat. Boss battles are necessary to progress through the story, but combat is mostly there for collecting gil and item drops, and side-quests are often more lucrative in that regard.

Lightning Returns is packed with what feels like three games worth of side-quests. There are so many that most do not even have characters in the world to act as quest-givers. Instead you pick them up from message boards posted in each town that act as a list of fetch quest chores to accept and complete.

The developers tried to do something good and right, even if it wasn’t necessarily what they had hoped.

Even among those side-quests offered by characters in the world, you’ll only find a small selection in which the quest-giver possesses anything resembling a personality. There’s context or meaning behind any of the tedious fetch quests they ask you to accomplish. A few stand out, such as a boy who has been turned into a cat and a down-on-his-luck chef, but there are dozens upon dozens more making up the majority of content in Lightning Returns.

More importantly, the term “side-quest” is somewhat of a misnomer. In Lightning Returns, these non-story quests are your main option for improving Lightning’s stats. Each one you complete improve your health, strength, or magic stat a little bit. You won’t know which stats they improve until after you finish them either, so you’re just left with the general goal of completing as many side-quests as possible in the hopes of making Lightning stronger.

It’s unfortunate, since there’s a fresh idea here. The system eliminates the need for level grinding, an old standby that just about every JRPG leans on. It’s initially cool to go after these side-quests and improve Lightning in the process, but the enjoyment factor quickly diminishes because of how boring and tedious they become.

There is, however, a time limit. You’ve got no more than 13 in-game days to complete the story and any side-quests before the world ends. Much like side-quests being used in place of experience leveling, it’s a strong idea that fails to deliver.

In theory, the time limit is supposed to make you prioritize which quests you complete, with every quest ranked between one and three stars based on difficulty/time commitment and rewards, some of which extend your remaining time in the world. However, it isn’t difficult to complete all of the main quests by the seventh or eighth day. Doing so extends the clock to the full 13 days, leaving you with five or six days to check off any remaining side-quests without any real story progression. That’s where the side-quest tedium really sets in.

There’s a bit of Lightning dialogue that delivers an accurate meta-textual analysis of this game and the Fabula Nova Crystallis series as a whole. “All you did was try your best,” she says. “There’s nothing wrong with that. It didn’t turn out like I’d hoped, but it wasn’t a mistake. You tried to do something that was good and right. You must never throw that away.”

It’s true. The Final Fantasy XIII saga has not turned out like its developers had hoped, with the originally planned Final Fantasy Versus XIII now even further divorced from the world of Pulse, to the point that it’s become Final Fantasy XV. After two games that are among the most divisive in the series’ history, it’s easy to imagine the developers conflicted and uncertain of how to conclude their Final Fantasy XIII trilogy as Lightning Returns came together.

Even the game itself is about mulligans and do-overs, with a story that revolves around the end of one world and Lightning’s exploits to prepare people’s souls for a rebirth in the new world. That plot of redemption parallels what appears to be the game’s design philosophy, right down to an uncertainty as to what aspects are in need of redemption.

That uncertainty has manifested in Lightning Returns: Final Fantasy XIII. As Lightning puts it, the developers tried to do something good and right, even if it wasn’t necessarily what they had hoped. The game’s experiments with time restrictions, quest-based stat progression, and changes to the combat system are earnest efforts that unfortunately fail to come together in a cohesive way. Couple all of this with a main plot that doesn’t even live up to the low bar set by high school fan fiction, and you can see how Lightning Returns might have been better left sleeping in a crystal for eternity.

This game was reviewed on an Xbox 360 using a copy provided by the publisher.

The PS5 games with the best graphics