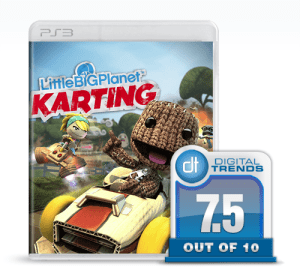 If you think of LittleBigPlanet as chocolate and ModNation Racers as peanut butter, then LittleBigPlanet Karting should be the delicious result of pairing the two brands together, right? On paper, there is no reason that these two PS3 exclusive franchises shouldn’t mesh perfectly and offer a new and compelling series that will shine with the blinding light of creativity and gameplay. In reality though, the combination takes the successful core aspects of both games and combines them, but fails to elevate them to the high standards both series have become known for. The developers leave that to you.

That may sound a bit harsher than intended, because LittleBigPlanet Karting is a decent kart racer. It sports the mechanics that United Front Games honed on the ModNation Racers, then adds the insane amounts of customization that Media Molecule’s LittleBigPlanet series is famous for. It plays smoothly, and the humor that both series have worked so hard to cultivate is there. But there is just something missing that holds LBP Karting back from what it could be.

Of course, both of these games are heavily reliant on user generated content, so the game may turn into something entirely different, which makes this a particularly difficult title to review. There are some elements that aren’t as well done as they could be though, so we’ll have to focus on that and hope for the best from fans.

From the moment LittleBigPlanet Karting starts, you are greeted by a narrator that should be familiar to LittleBigPlanet fans. He explains the new world you find yourself in, and offers a handful of witty asides that sound so much better when told in the tone of a lovable, stuffy English professor. Reacting to the news is the ever emotive sackboy, whose design is pure brilliance.

Once the setting has been gleaned, you are introduced to your customizable pod, the hub from which all your activities will begin. After spending a little time tailoring your sackboy to your aesthetic preferences and making them suitably adorable/scary/weird, you have the option of jumping into the story, heading online, or creating your own tracks.

The story is a bit piecemeal, broken up into separate planets, each with a handful of events all unified by one theme (like a monster-inhabited island or a laboratory). Once you unlock these locales by completing the previous planet, there is a rudimentary story. But as with most racing games of this ilk, it is very basic, just with a touch of the familiar – and welcome – LittleBigPlanet flair.

Upon completing an event, you also unlock levels for versus. A determined racer can burn through the campaign in just a few hours, but it takes even less time to feel like you have seen everything. The early stages are fairly basic, and racing them can often feel more like a necessary chore to unlock content than something you’ll want to do. Repetition quickly creeps in, and one race feels much like another.

It isn’t that the races and tracks are bad, and there are variations on the game modes that involve combat, but they tend to feel somewhat flat and the enemy AI can be downright frustrating. This can be adjusted, but it signifies a design element that is out of balance: the weapons.

As with most kart racers of this ilk, LittleBigPlanet Karting is chalk full of weapons littered throughout the track. These range from dropping explosive traps to heat seeking missiles, but they all quickly become the dominant force within the game. Racing well is only a small part of winning; it really comes down to weapon management and defense.

That sounds all well and good, but many of the weapons, whether shot by the AI or a real person, are deadly accurate and will hit you repeatedly. The only way to stop them is to sacrifice whatever weapon you have as a shield, which then leaves you open to attacks from the next person behind you, and the next, and the next. It can be common to go from a commanding lead to a distant last place, as one enemy after another times your respawn to send you back to oblivion. It shouldn’t be a big deal, but it severely hampers the actual racing, and having many of these weapons designed so that you can’t dodge them goes far beyond annoying.

Playing online fares slightly better, as your opponents will likely race with a touch more strategy and hold their weapons for the leader or for defense, but not for long. There are plenty of weapons to keep the cycle going. That isn’t a problem with the weapons themselves as much as the flow of the races; the pacing of the gameplay, if you will. It just grows old quickly.

The other game types – including a battle mode that you frequently come across – are a nice to break in the monotony, but the best strategy generally ends with you driving in a circle, collecting a weapon, firing, then repeating until the time runs out. Other game variations like capture the egg, only modify this strategy slightly.

There are also several modifiers on the course, things like booster packs and grappling hooks, as well as collectibles that unlock content or raise your score. None of it really adds much though, and the campaign becomes a grind. Of course, that is just a small portion of the game.

Play, Create, Hope for the Best

Both of the series feature a healthy creation element, and that is represented here in spades. Along with the customization options for your sackboy, cart, and pod there is a deep level editor that allows you to create and share your own tracks. The tools available are essentially the same that the developers use, which gives you a huge amount of options – so much so that you can spend hours creating even a relatively simple track. If you really want to go all out, you certainly can, but as you might expect it will be more of a long term project to design something completely original. The degree to which you can create, and the options at your disposal are exceptional.

Once you have spent more time than you’ll probably care to admit making sure your track is race worthy, you can then throw it online. The best tracks will rise to the top thanks to the fan votes, and the more content created the more this game will evolve. It doesn’t have quite the potential to continually reinvent the game as LittleBigPlanet did, but that is a credit to that game more than a criticism of this one.

And this content is what makes this game so difficult to review. How do you measure potential? You really can’t, you just have to hope that the fans embrace it with as much gusto as you could imagine, then wait to see what happens. It could end up being an average game with a lot of downloadable levels, or it could be a once in a generation experience. Time will tell.

The content and gameplay on LittleBigPlanet Karting is average, and compared to the pedigree from which it comes, downright dull at times. The customizable options are nice and the mechanics are sound, but the levels are fairly bland, and the constant, unending attacks makes this a mobile combat game masquerading as a racer, which is not a good thing. There’s more to it though.

All of the gameplay elements that don’t work in the campaign can be overwritten and replaced in the created content, and race events will be limited only to the possibilities of fans – and the more dedicated the fan, the better the content. The tools are all there, but how can you judge on potential alone? But if things fall into place, this score will be irrelevant and the community the game fosters could put forth pure brilliance. We’ll have to wait and see.

(This review was conducted on the PlayStation 3 using a copy provided by the publisher.)

‘LittleBigPlanet 3,’ other titles free for PlayStation Plus members in February