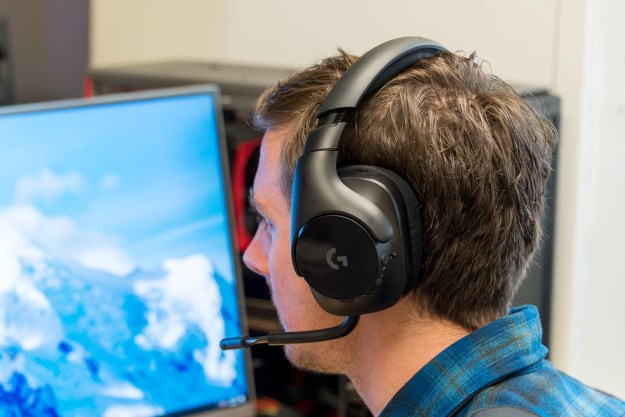 “Strong audio performance, a powerful mic, and tons of customization place Logitech’s G533 at the top of its class.”

Logitech’s newest addition to its headset family, the G533 may be cheaper and lighter than its G933 sibling, but it features sublime audio and mic performance for its price, and deep customization through Logitech’s device software. If you’re looking for a killer PC gaming headset under $150, the G533 must be on your short list.

The G533 makes a solid first impression once it’s out of the box and on your head. There’s some noticeable clamping pressure at first, but this dissipates soon during initial use. Overall, the headset is comfortable; it sits over the ears, and weighs in at 12.5 ounces (or just under one 1lb), making it a noticeable presence on your head and ears, but the weight implies structural integrity. The headset remained comfortably in place during natural head movements. One thing we aren’t as excited about is the fabric on the earcup padding. Logitech has opted for a breathable mesh material that can be easily removed and washed (a feature we welcome and something we wish more headsets and headphones employed) but the fabric is scratchier than material found on most headsets we’ve tested. It’s not uncomfortable, per se, but the G533 are noticeably rougher on the ears than, say, Sennheiser’s PC 373D or PDP’s AG Afterglow 9+.

Setup is standard, as far as wireless headsets are concerned: Simply plug a provided USB dongle into an open USB port on your PC, flip the power switch, and put the headset on. While not required for basic use, downloading the Logitech software is a recommended step, as it will enable crucial features like equalizer manipulation and swapping between multiple surround sound settings.

The G533 is a simple, functional looking unit. The left ear cup is home to its controls, which feature a volume dial, mic mute button, and power switch. A moveable, extendable mic boom up front folds up neatly into the left ear cup where it sits virtually unnoticed. The headset is built with matte black plastic on the headband and most of the earcups, save a few glossy accent, while metal swivel joints and headband extensions lend structural integrity and alleviate the squeaky/wimpy feel that some headsets at this price point suffer from.

Such a simple design gives the G533 a more mature and professional appearance, which we prefer over the usual gamut of headsets that feature overtly “gamer” or “cybernetic” aesthetics. Our only caveat: the G533 does lack any sort of wired input, which means those looking for a mobile-friendly option will need to look elsewhere.

When you first put on the headset and turn it on, you’ll likely notice a soft wireless hum. We found this to only be present when nothing was being played back; in-game or while listening to music, it was completely unnoticeable. What is noticeable is just how capable the G533’s DTS Headphone:X surround sound is, which replicates a 7.1 surround speaker setup within the headset. In a game like Battlefield 1, which has a specially-tuned headphone profile for the G533, the sounds of battle in the distance felt appropriately “far”, without fading into the back of the mix – an issue we noticed with other headsets. On the other end of the spectrum, the sounds of close-up gunfire and dialogue were clear and present without being overwhelming.

The DTS Headphone:X made atmospheric games like Dark Souls III and DOOM all the more immersive.

Controlling and fine-tuning playback and EQ settings on the G533 is done through included Logitech software. Several presets exist — including MOBA- and FPS-specific settings — and enables swapping between 7.1 and stereo mixes. We found the audio quality to be consistent between the different surround sound settings, with stereo serving games like Hearthstone or Diablo III, while the 7.1 made atmospheric games like Dark Souls III and DOOM all the more immersive.

Outside of the software, the G533 has physical feedback features as well. Using the ear-cup volume control causes a beep to emit. These beeps are a nice touch, but the feature doesn’t give an indication of how close one is nearing to max volume, plus we found the increments of volume change was not uniform with the beeps. A similar beeping function indicates when the mic is muted/un-muted.

Speaking of the mic, we were very pleased with the the G533’s voice quality. The built-in pop filter and noise-cancelling capabilities were apparent when we tested its recording quality, but we did find that distance can be an issue. At what we would consider a normal mic-to-mouth distance, voice quality was still clear and intelligble, but quieter than normal. However, since the boom makes mic positioning flexible, this is an easy fix – simply place the mic closer to your mouth than you might be used to.

Uses outside of gaming are limited. As mentioned before, the G533 is entirely wireless, disqualifying the headset if you prefer a physical connection to your music setup. Still, the G533 isn’t necessarily a great headset for music. The G533 certainly aren’t bad with music — we found that everything from hip hop, to synthwave, to heavy metal sounded great, especially with the 7.1 surround effect enabled — but it never quite captured the fullness that a music-dedicated headphone provides. Logitech’s software is also devoid of any music-based settings or presets –, a clear message that this device is primarily for gaming – and at that task, it excels.

With the G533, Logitech merges killer audio performance, customization, and solid design at a price point that obliterates most similarly priced headsets.

As a gaming-only headset, the G533 is the wireless device to beat at the $150 price point. Those looking for a more music-friendly device may want to opt for a pair of headphones instead, while a wired gaming headset like the Razer Mano’War 7.1 is less expensive, mobile-friendly, and  capable of great sound and 7.1 surround .

The G533 has a solid build, and its removable earcup padding means it can be kept clean and pretty. Given how well it performs in both gaming audio and mic categories, we suspect this will be your go-to wireless PC headset for some time.

Yes. If you’re shopping for a wireless gaming headset, the G533 should be at the top of your list. Great sound, customization, and 7.1 surround make it a powerful performer in its price class already, with long battery life and wireless connectivity sweetening the deal.

Topics
The best gaming speakers for 2023
Best gaming headset deals for January 2023
PS5 tips and tricks: how to get the most out of your new Playstation
PlayStation VR2: specs, release date, launch games, price, and more
The best PSVR games for 2023
Like a Dragon: Ishin’s Trooper Cards are full of cameos, including Rahul Kohli
How to romance characters in Fire Emblem Engage
How to eliminate enemies with no ranged weapons in Fortnite
Fire Emblem Engage gift guide: every character’s favorite gifts
Call of Duty: Warzone 2.0 Season 2 will finally fix its looting system
The best capture cards for 2023: Xbox, PlayStation, and PC
Best Gaming PC Deals: Save on RTX 3070, 3080, 3090 PCs
Every video game delay that has happened in 2023 so far