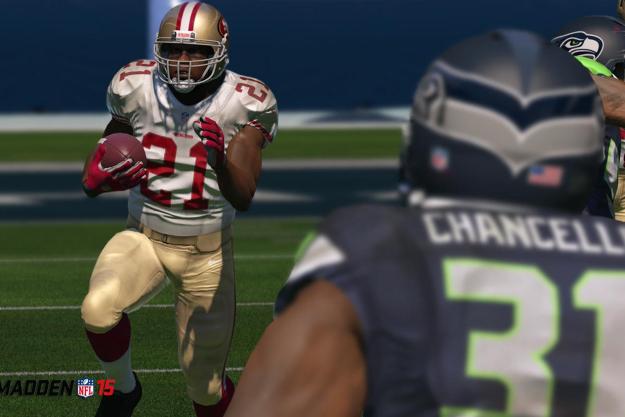 “EA Tiburon delivers a Madden game to be proud of in Madden NFL 15, thanks in large part to a clear emphasis on bringing new fans into the fold.”

American football is man-chess. To the casual viewer, sure, it looks like a bunch of dudes throwing their full weight against one another in a race to carry an oblong ball 100 yards. That is a big part of it all, but there’s so much strategy going on though. It’s just very easy to miss when you’re not a student of the game.

That’s one of the key things EA Tiburon set out to fix in Madden NFL 15. Even football novices will find the tools to dig deep into the game’s expansive, sometimes intimidating array of options. And the game is better for it.

For instance, the newly revised Skills Trainer is one of the first things newcomers see after they fire up the game. It’s still the same collection of minigame-styled tutorials that it’s always been, but the Madden NFL 15 take goes way beyond teaching controls. In addition to basic offense and defense categories, you also get deep dives into specific football concepts and play strategies, as well as a Gauntlet mode that mixes up a playlist of drills into a scored, multi-round challenge.

It’s hard to overstate just how valuable it is to have a Skills Trainer that actually explains how football works.

It’s hard to overstate just how valuable it is to have something in the game that actually explains the difference between a Dime and a Nickel package, or how choosing a certain defensive formation affects movement on the field after the snap. There’s a basic assumption that anyone playing Madden is already a fan of football – you’re not getting lessons on what a first down or an extra point is – but the closer look is illuminating if you’re the sort of player that tends to lean on Coach Suggestions when calling plays.

It’s still not completely perfect. The drills connected to each tutorial are meant to let players test out concepts and strategies that have just been demonstrated, but football is a very fast-moving sport with a lot of movement once the ball is snapped. In the tutorials and the drills both, all of the action is still at the mercy of the game’s AI. A newcomer might follow every direction perfectly, yet fail to complete a drill. It’s more an issue of signage than anything else; Skills Trainer appears to be a tutorial, and it is in many ways, but there’s also a scored challenge-mode element.

That’s a lot of words for what amounts to a tutorial, but it speaks to the extent of the changes EA Tiburon made in an attempt to draw new players in. That’s a good thing, because the football play is superb. Offensively, the running game feels tighter and less prone to physics snags that see players tripping over even the smallest obstacles. The passing game is slightly less polished; it works the same as it always has, but too frequently you’ll see a bad pass ending in an interception, even on easier difficulties.

Defensive play gets a big boost thanks to a new camera perspective that peers over the shoulder of your selected defensive lineman. It’s an intentionally limiting perspective that forces players to really focus on whichever segment of the defense they’ve decided to commandeer. New visual indicators also help, better signposting how a defender can respond after the snap and what his tackle range is. Once you get the hang of the new elements, you really start to feel like you can make a difference on defense. It’s so satisfying to jump off the line right at the snap, blow by an offensive lineman, and slam into the QB like an out-of-control freight train without letting the AI handle any of it.

The strategic side of the game is also enhanced by analytics data streamed in from the Madden community. Playbooks don’t just show you the name and playart anymore. Now there’s text that communicates data on the plays themselves: How often the team in question uses them, how frequently they’re successful, and so on. The series has always been good about suggesting plays, but the new flood of data points – much like the improved Skills Trainer –helps players understand why a particular play is effective.

While there’s sometimes a little too much information to process as a play clock is ticking down, the addition of play metrics is a good thing. It’s the sort of teaching tool that the series has long needed more of. The emphasis on creating a noob-friendly experience makes it easier for players new and old alike to dip their toes into marquee modes like Ultimate Team and Connected Franchise, both of which are deep enough to come off as intimidating at first glance. Even with those, EA Tiburon took steps this year to further streamline the experience in a way that’s friendly to non-veterans.

For Connected Franchise, Madden’s deep career mode, a new push-and-pull between Confidence and XP creates a very clear dividing line between weekly play and long-term development. Each week leading up to a game, it’s possible to work with the team on menu-based and playable exercises that boost either Confidence or XP, but never both. The former affects how players perform going into the next game; a confident player is less prone to making mistakes. XP is for long-term growth; earn enough for a player and you can spend the amassed points to improve some stat or another.

EA Tiburon took steps this year to further streamline the experience in a way that’s friendly to non-veterans.

Then there’s Ultimate Team, Madden’s fantasy football-inspired game mode that combines card collecting with traditional Madden-style football. Same as always, you build a team by opening packs of cards that give you players, uniforms, stadiums, and the like. These players don’t last forever; they’re under contract, and you need to spend contract cards that you pick up to get more games out of them.

All of this information is communicated much more clearly than before. On top of that, the Reserve Deck – where unused cards used to be stored – has been eliminated completely. All of your cards now go into the same pool, and there’s no need to worry about engaging in the clunky process of sending them back and forth. Immediacy is the keyword here. You’ve got your cards, they’re all in one place, and sorting through them is a snap.

Just like Call of Duty, FIFA, or any other annualized franchise, the various changes aren’t something even regular casual players will feel right away. But the overall experience is much smoother, and the dialogue the game engages in with the player, much clearer. The Madden series is due for a ground-up reinvention one of these years, but as iterated entries in the series go, EA Tiburon’s efforts on Madden NFL 2015 shine.

This game was reviewed on a PlayStation 4 using a disc provided by EA Sports.