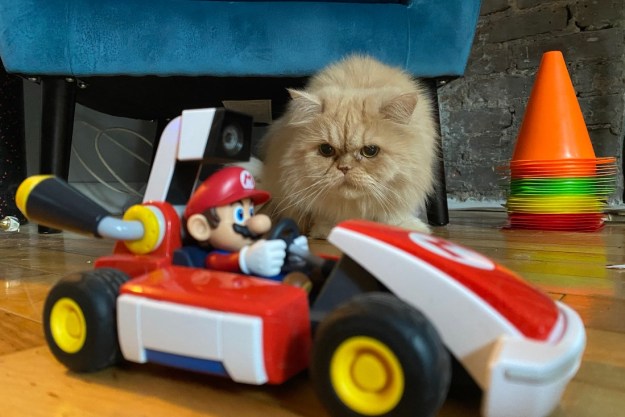 “A full grid of annoyances force Home Circuit from a sweet drift into a disappointing spin.”

The pitch for Mario Kart Live: Home Circuit is wonderful. It takes Mario Kart, perhaps the most beloved racing franchise in all of gaming, and brings it to your living room with a real, physical kart that can hustle under tables and around chairs. That kart has a camera that, over a wireless connection to your Nintendo Switch, delivers an AR racing experience. Suddenly, every room in your house is a racetrack.

Unfortunately, Home Circuit doesn’t work as well as its promotional videos would suggest, but it at times provides a fun and engaging experience that is fleshed out with content for even the most die-hard fans of the series. As with many Nintendo peripherals, however, it will likely end up collecting dust in storage soon after a handful of playthroughs.

Home Circuit is awesome, for awhile

Opening up the Home Circuit box was pure, nostalgic joy. The toy kart impressed me with its build quality, as well as how compact it is. It’s a toy, yes, but one that justifies its $100 price tag, especially once you start driving it.

After downloading the software from the eShop, and using an on-screen QR code to pair the kart to your Switch, you’re ready to go. Driving feels incredibly responsive, and the tight turns required to navigate small tracks are surprisingly possible, even at the higher speeds.

The game finally provides a use for leftover Labo cardboard, as you’ll need to set up four colored gates around your space to form checkpoints on a track. According to Nintendo, track size can extend to 15 feet by 15 feet in size, and after attempting to push size and designs to its limits during the week I’ve had the game, I can confirm you don’t want to build circuits larger than that. They might look impressive, but they definitely interfere with gameplay.

Once the gates have been placed, you’re free to design the track as you please between them, using the kart to form the layout. I have a rather narrow but long apartment, so I split me track between two rooms, and had the kart drive under the couch and table during many of the circuits. The kart performed well when driving from the hardwood floor to the rug under my table, although you will need to make sure any similar surface is free of kinks or wrinkles. My rug became an unintended obstacle if it was too bunched up.

Depending on the size of your room, you may need to adjust some of the gates’ direction and spacing, though you should be able to create a track even in very small spaces. Jumping into the first few races, controlling the toy kart was like it was in any other modern Mario Kart game. Using items, and having items used against you, is snappy and satisfying.

The longer you play, the worse it gets

It’s undeniably awesome to have a miniature Mario zipping around your home, but you might not notice it, because your attention must be focused on the game. Spectators will be able to watch the kart do its thing. I’m sure families will enjoy getting together to watch the kart (at least once or twice), however, I quickly realized that, for the player, the kart becomes invisible.

Elemental effects and gate modifiers add tweaks to gameplay that try to replicate the thrill of other Mario Kart titles, but races are short, and the consequences lack variety. Mario might get frozen by ice blocks, stuck in lava puddles, or snatched up by a Piranha Plant, but in all cases the result is the same: The kart stops moving. I found myself constantly coming to a halt, and it mattered little how it actually happened.

There are more elaborate effects, such as getting blown around in a sandstorm, or being pulled in different directions by a Chain Chomp. But since there’s no punishment for leaving the track boundaries, these don’t really hinder your progress. I learned to ignore them.

It’s good the game doesn’t penalize the racer for cutting corners or leaving the track boundaries, because the augmented reality circuit is constantly shifting and adjusting as you drive. The course you end up forming at the start of the race will look different than the one that you complete. The game’s AR tracking isn’t awful, but it certainly could be better, and its strange to see tracks slightly shift while playing.

I took the kart to larger spaces, hoping more light for the camera and real estate for the vehicle would alleviate the issues I had, but it didn’t help much. Neither my friend’s spacious roof, or a colleague’s large performance space, provided the experience I was looking for. Races still ended too quickly on even the largest tracks. The only benefit to shorter courses is that you’re never too far ahead of the pack to take it easy, so races remain tense to the end.

I wondered if I could use some pieces of cardboard to form ramps up to my coffee table and create circuits with changes in elevation, but I ran into two problems. The first was the AR tracking doesn’t work well when changing height, as it’s designed to be played exclusively on a flat plane, so the track shifted during play even more than usual. Also, the kart itself doesn’t have the horsepower to get up anything beyond a very slight incline. I attempted to build ramps in stages to counter this issue, but this quickly became a chore.

Despite all its issues, I still found myself playing a lot with the kart, beating the entire run of cups on both 50cc and 100cc speeds. I’m now making my way through 150cc, although depending on the course, this can at times be too fast to navigate through my space.

At its core, there’s a solid Mario Kart game here, and I hope the environmental and gate effects are brought over to the main series for the proper ninth installment, as I think those additions could add something to the franchise.

Still, Mario Kart Live: Home Circuit has too many little annoyances that can only be alleviated by having a perfectly sized, perfectly lit space — like the one in Nintendo’s promotional materials. This might still be a hit with children, or anyone else less interested is Home Circuit as a game than a toy, but anyone hoping for depth or replaying the game will be disappointed.

For those without the space and without a strong desire for the novelty of having the toy kart, it’s best to stick to Mario Kart 8: Deluxe until the proper next installment.

Once you’ve gone through the grand prix a handful of times, there’s little incentive to keep playing.

If you have children and a Switch, this is going to be a hit with them this holiday. If you’re hoping for a real AR game that will entertain you for hours, keep your wallet in your pocket.