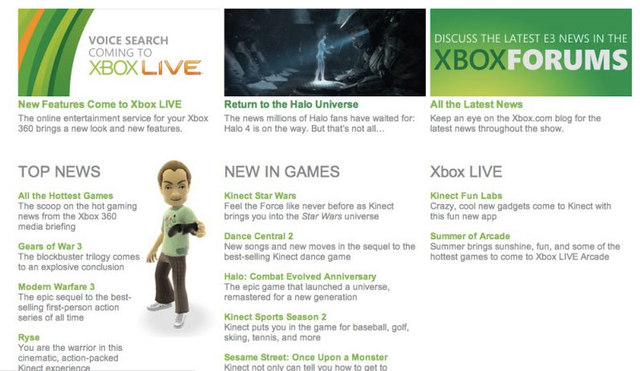 Microsoft’s E3 press conference starts in a mere 20 minutes, but one of the company’s biggest announcements has already begun making the rounds. This morning, Microsoft’s E3 landing page prematurely launched and clued us in to some new features coming to Xbox Live and upgraded Kinect capabilities, as well as a few new Kinect titles. More traditional Xbox fanboys will also be thrilled to hear there are not one but two new Halo titles coming to a console near you. Halo: Combat Evolved Anniversary will be available in HD, maybe even 3D. The site also reads “Halo 4 is one the way,” and we’ll hear soon enough the details about this title.

As for the new Xbox Live features, Microsoft is altering the UI and adding voice search, something Steve Ballmer touched on at CES earlier this year. For the Kinect, users will be getting new titles like Dance Central 2, Kinect Star Wars, Sesame Street: Once Upon a Monster, and Kinect Sports Season 2. Kinect won’t only be getting some added games but some upgraded features. SlashGear was able to get a longer look at the landing page before Microsoft took it down, and has some details on these improvements. Users will be able to create custom avatars and share them with friends. There’s also Kinect Sparklers, will takes your photo and then lets you wave digital sparklers in the air around you.

We’ll be on location at the Microsoft press conference this morning at E3 to confirm all the details and bring you more updates as they are announced.