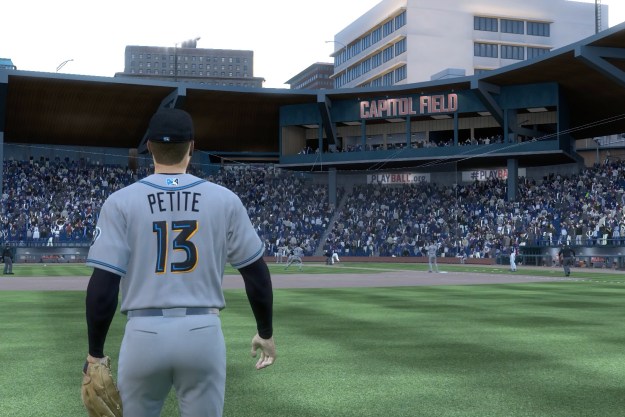 “MLB The Show 19 is a comprehensive baseball sim with a wide variety of engaging modes.”

After being tagged out while attempting to turn a single into a double, Babe Ruth grabbed a fistful of dirt and tossed it at the umpire. Ruth was quickly ejected but still removed his cap and bowed to the crowd anyway. A disgruntled fan heckled him loud enough for Ruth to hear over the incessant booing from the crowd. “I didn’t mean to hit the umpire with the dirt, but I did mean to hit that bastard in the stands,” Ruth said after the game.

I’ll confess, I’m sharing this Babe Ruth quote in a review of MLB The Show 19 partly because I simply love everything about this anecdote of the greatest ballplayer of all time. But the Great Bambino in fact appears in the latest entry of Sony’s baseball sim. Unfortunately, you only get to relive the shining moments of his career, not the unflattering ones.

At this point, the series is so refined that it’s difficult to find criticisms of its core gameplay. MLB The Show 19 is the most accurate representation of its sport in video game form. The Show 19 is a great distillation of America’s favorite pastime that captures the thrill and magic of the game across numerous differentiated game modes. The only thing that’s really missing is arguments with umps, ejections, and player brawls.

The series’ staples — Road to the Show, Franchise, and Diamond Dynasty — feel incredibly familiar, but two new game modes, March to October and Moments, offer a fresh way to experience the increasingly refined gameplay on PS4.

MLB The Show 17 introduced Critical Situations to Franchise, allowing you to play key moments in each game. It turned the normal hour-plus contest into a quick ten minutes. Sony used a similar mindset in designing March to October, and the result is the most inspired new game mode I’ve seen in a sports sim in years.

In March to October, teams are separated into four categories — favorites, contenders, underdogs, and longshots — based on their real life 2019 outlooks. Playing as a favorite or contender will make the journey a bit easier as you won’t have to significantly outperform your team’s projected win total, but going in as an underdog or long shot can be rewarding.

After choosing your team, you work your way through the standard 162-game schedule, but you don’t play every game. Instead, March to October generates an objective for roughly one game in each series. The scenarios are wide-ranging. Sometimes you enter a game down by a run in the 7th and are asked to mount a comeback. Other times you play as one position player much like Road to the Show and are asked to perform well enough to receive a season long boost.

The new Moments mode takes you through both recent and early baseball history to relive iconic moments.

If you succeed, your team gains momentum which helps in the simulated games. If you fail, your team goes cold, which leads to some losses in the simulated games. Streaks also play into the objectives. Failing multiple times in a row can put your team on a long losing streak, forcing you to break it in grand fashion in the next playable scenario. Completing the objective multiple times in a row, on the other hand, can lead to a huge hot streak.

After several successes, I entered a scenario with the chance to finish off a no-hitter, which then set my club on fire. All of these scenarios feel fittingly high stakes, inserting you into pivotal portions of games knowing that success will lead to further wins while failure could set your club back in the race to the postseason. Recent and seasonal storylines are recapped by announcers before and during each scenario. The commentary goes a long way towards making the mode feel personable while letting you really dig into the season despite not actively participating in most of the games.

The menu system is bare bones, with just a calendar and win projection chart that fluctuates throughout the season. It’s refreshing to strip the game down to its core essentials in March to October. You don’t have to worry about managing your team here. You simply get to play exciting scenarios that last anywhere from five to twenty minutes.

An entire season can be finished in less than ten hours, and the rewards for winning the World Series feed into the Diamond Dynasty card collecting mode, with better rewards being handed out as the difficulty goes up. Smartly, you have the option to import your March to October season into franchise mode when you’re done with a season for continuity.

The Show’s gameplay excellence makes it hard to be impressed by year-to-year improvements.

Though it doesn’t thrive on the same level as March to October, the new Moments mode takes you through both recent and early baseball history to relive iconic moments. Also objective-based, you have the chance to go through key points in the 2016 Cubs World Series season, the careers of Babe Ruth and Willie Mays, Bryce Harper’s rookie season (he’s the cover athlete, after all), and more.

Moments is a neat addition but it doesn’t quite nail the presentation. For instance, when I went through a Cal Ripken Jr. moment, all of the other athletes were modern players who did not play with the legendary hitter. When playing as Babe Ruth or Willie Mays, a crisp black and white filter is used.

Jerseys are accurate with the time period, but players other than the legend are simply labeled by their position such as “Shortstop.” Commentary for these truly memorable moments is off, too. I capped off a World Series victory, but the announcers simply acknowledged that my team had won, as if it was an ordinary game.

Moments also funnel into Diamond Dynasty, with some only unlocking by playing the card collecting mode and rewards largely going towards the mode itself. More Moments are expected to arrive post-launch, so there’s potential here for longevity. They’re still fun and often offer challenging objectives, like hitting several home runs across a small stretch of games, but it feels like Moments needed a bit more time in the cooker.

MLB The Show has had excellent gameplay for many years. This excellence makes it hard to be impressed by year-to-year improvements, since they are always quite subtle. In The Show 19, batting feels almost identical to last year, with minor improvements to ball physics that produce more realistic looking results after making contact.

The defensive side of the game is where most of the improvements have been made. Many new fielder animations have been added that have helped clear up most of the rather annoying fielding miscues that would seemingly occur automatically. No longer did I feel as if my shortstop made the wrong move at the crack of the bat to put me in a bad position to make a play. Outfielders generally get moving in the right direction easier, and it crucially feels easier to control the momentum and make the correct play.

Color-coded icons mark fielders by prowess, letting you know which ones have access to more  fine-tuned animations and plays than others. This is most noticeable in the outfield, where balls hit towards the warning track can be ball-hawked with the best outfielders. This leads to some stellar home run-robbing animations.

Player models also look a bit more lifelike this year, with many lesser known ballplayers now resembling their real life counterparts. There are still guys that look nothing like they do in real life, but generally it’s better.

The Show series has three tentpole game modes: Road to the Show, Diamond Dynasty, and Franchise. These modes are where players spend the brunt of their time, and for good reason. Each mode offers near virtually endless amounts of baseball gameplay, with unique loops to define them. Unfortunately, each of these modes rests on their laurels in The Show 19.

Franchise is still a comprehensive mode that lets you manage a club over the course of an era.

Road to the Show, the player creation career mode, tries to inject some new life into its predictable loop by adding personality traits and off day exercises. The results are underwhelming. Occasionally, you’ll interact with other teammates and build both relationships and advance one of your three personality traits. These traits include big picture stuff like being a team leader or being your club’s heart and soul.

While you technically level up these traits, I saw no tangible value to the system at all. My advancement through the minors and into the majors still solely felt performance-based. The training exercises are largely reaction time mini games. While they can be fun and up your attributes, they aren’t as wide ranging as the ones seen in the NBA 2K series.

In-game Dynamic Challenges spice up the play on the field a bit, though. Throughout games, you’ll sometimes be asked to pick from two to three objectives, like getting on base or driving in a run, for that at bat. If you complete the objective, you receive bonus attribute bumps.

The card-collecting Diamond Dynasty mode has become the pulse of The Show, and even more so this year because of how the new modes feed into it with rewards. That’s a good thing when it comes to the collecting aspect, as there are tons of opportunities to earn cards and build a roster without spending money on microtransactions. But besides an impressive roster of new baseball legends entering the fray, Diamond Dynasty largely rehashes the same game modes we’ve seen for years. Admittedly, it’s a robust package with a plethora of engaging activities to play solo and online, but it doesn’t offer anything new to get truly excited about.

Even less exciting is Franchise, which is nearly identical with the exception of a more accurate financial system to handle player contracts. Franchise is still a comprehensive and finely tuned mode that lets you manage a club over the course of an entire era. As the de facto main mode, however, it underwhelms.

As mentioned earlier, there are microtransactions in MLB: The Show 19. While MLB The Show 18 removed them from Road to the Show so players couldn’t pay to win, they still exist in Diamond Dynasty. Card packs can be purchased for 1,500 Stubs, The Show’s currency. Each pack costs $1.50, but if you buy Stubs in bulk you can get more bang for your buck. Since you earn tons of rewards and that can be be quickly turned around in the marketplace for in-game currency, I’ve never felt the desire to spend real money in Diamond Dynasty.

MLB The Show 19 stands apart from last year’s entry largely because of the excellent new March to October mode that brings a refreshing way to play through a whole season quickly. Playing through iconic events in baseball history in the Moments mode is hit or miss, but it’s a welcome addition nonetheless. Fielding is improved thanks to new player ratings and complementing animations, but overall the core gameplay is quite familiar. Sadly, Road to the Show, Franchise, and Diamond Dynasty, while still great modes, don’t turn the wheel.

No, MLB The Show 19 is the only major baseball sim available worth playing.

With wide variety of engaging modes, MLB The Show 19 could keep you playing for hundreds of hours, long past the March to October.

Yes, if you’re a baseball fan, you should buy MLB The Show 19.