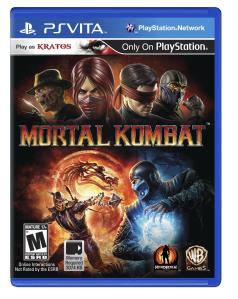 The software line-up for the PlayStation Vita is looking more and more impressive all the time. Learning from the mistakes of the Nintendo 3DS, the Vita has loaded up its launch window with massive hits and plenty of options. In fact, the entire year will see a huge number of big name hits, but the launch window through the Spring is absolutely packed.

One of those major releases has now been confirmed to be Mortal Kombat, which will be released this Spring.

The portable version will be a port of the console game that debuted last April and went on to sell over three million copies. The Vita version is promising a few new tricks that will be unveiled over the coming months, but it will include a full story mode, the x-ray moves, and (of course) fatalities.

The Vita will hit North America on February 15, and the list of titles that will be available on that day is growing ever more impressive. As it stands today, 24 games will be available on launch day, at least three games are confirmed for a March release, and at least 10 titles are listed for Spring 2012 with more to possibly follow.