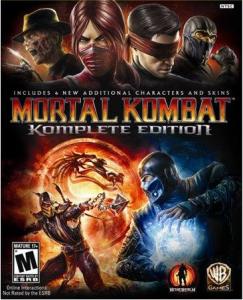 The new release features the same game that debuted last year, along with all of the DLC that has been released since the original game’s April release. That includes four new characters, 15 “klassic skins,” three old school fatalities, as well as a few additional perks not related to the gameplay.

The Komplete Edition does not change anything from the previous version, so you can check out our review from last year here if you are interested in the game’s core functions. Needless to say, the fighting aspect remains strong, the blood gushes, and the fatalities would make a nun weep, just like before.

The selling point of the Komplete Edition is the inclusion of the DLC, which was available ala carte, as well as part of a Season Pass purchase. So if you already purchased all the DLC, or at least got what you wanted, then you have almost everything that this edition contains.

For those that skipped the DLC, the main focus was on four new characters that join the ranks of the fighters: Skarlet, Rain, Kenshi, and Freddy Krueger.

Each of the four characters has his/her own unique move sets and fatalities. These aren’t simply existing characters with a new skin, they each have their own feel to them. As with all the other characters, the fatalities for each character uses animation that is unique to them, and not simply recycled from other animations.

The four fighters all have their pros and cons, just like all the characters. They add some nice variety to the already robust lineup of 27 characters (28 including Kratos, who remains a PS3 exclusive). Included as part of the Kollection, you also receive 15 new skins, which are actually classic (or klassic) skins of some of the oldest characters, as well as three old school fatalities (for Scorpion, Sub-Zero, and Reptile). They don’t change the gameplay, but they add a touch of variety to keep things from going stale.

Those that purchase the kollection will receive two additional bonuses: a collection of 15 songs inspired by the fighters and exclusive to this game, as well as a code to digitally download the 1995 film Mortal Kombat, directed by Paul Anderson and starring Christopher Lambert.

So here is the things with the Komplete Edition—if you don’t already own the game, then this is the version you should buy. If you even see the original game, it should be deeply discounted as this edition will soon replace it completely. For those that did buy the game last year, there isn’t enough to justify the full $59.99 price tag.

The edition of four new characters is a nice, and if you own the game you should definitely consider purchasing them online, but adding a soundtrack and a nearly 17 year old movie won’t get anyone to re-purchase a title they already own, especially at that price point. Capcom tried it with Ultimate Marvel vs. Capcom 3 and earned the animosity of many fans–and that edition included eight new exclusive characters, and cost $20 less than the original retail release. Compared to the Komplete Edition, Capcom’s re-release was a value.

If you already own Mortal Kombat, this new version is not for you—you already have, or can get, all the same content easily enough online for under $20. It is a good replacement for the game currently on store shelves though. If you are going to buy Mortal Kombat anytime soon, between this version and the current edition still floating around, make sure you go for this edition. Even if the original is discounted, with the cost of the DLC characters ($4.99 each when they were released) the total price will quickly add up. Plus the new skins, the soundtrack, and the movie won’t get anyone to buy this game on their own, but adding them is a nice bonus.

But the real issue with this release is the price tag, which at the full retail price of $59.99 is far too high for a game that is quickly closing in on its one year anniversary. You get a lot for your buck, but the price will prevent anyone that already owns the game from even considering picking up this edition to get the new characters. Plus while there is a decent amount of new content, it is less than most re-releases of games that are re-packaged with DLC. Knocking off $20 or so could also have possibly lured in people that would otherwise not have considered purchasing the game. Still, as fighting games go, it remains one of the best, high price or not.