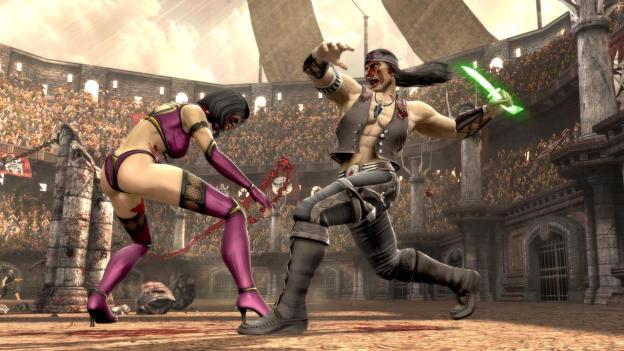 Sometimes perseverance pays off. Last year when filmmaker Kevin Tancharoen decided that he wanted to bring back Mortal Kombat to the life, he did so without the support or permission from Warner Bros., who own the rights to the property. Tancharoen, who may be best known for directing the 2009 remake Fame, called in several favors and created a short film titled Mortal Kombat: Rebirth starring Jeri Ryan and Michael Jai White in a gritty and semi-realistic look at the property. The clip quickly gained more than 2 million views and became a viral hit.

Warner Bros., took note, and commissioned Tancharoen to create a web-based mini-series based on Mortal Kombat. With a small budget but big talent, he created Mortal Kombat: Legacy, which debuted online in April shortly before the newest game in the franchise hit stores. The first episode reached over 5.5 million hits. The series ran for nine episodes, concluding on July 24, and the total series has been viewed over 30 million times. Not bad for a project that essentially began as a fan film.

Paired with the success of the recently rebooted game, which has sold close to 3 million copies, Warner Bros. decided to give Tancharoen what he wanted—the keys to the Mortal Komabt movie franchise.

According to the LA Times, New Line Cinema will partner with Warner Bros. on the reboot, which will be helmed by Tancharoen. The film will aim for a 2013 release.

“The new game and the online shorts prompted us to consider a reboot of a brand we hadn’t been actively thinking about,” Toby Emmerich, president of New Line said.

The film will follow the path laid out by the web series, and offer a much more realistic and gritty look at the Mortal Kombat world than the successful 1995 and its not-so-successful 1997 sequel did. The original films were produced by Lawrence Kasanoff, who has been involved in a contentious legal battle with Warner Bros. over the rights of the film. One early lawsuit has been settled, but a second case from 2008 regarding royalties is still pending. According to sources speaking to the LA Times, both parties are close enough to a settlement that it shouldn’t slow the progress on the new film.

Now that Warner Bros. owns the rights to the property in total, including both the film and video game rights, the next film will likely be timed to coincide with the next Mortal Kombat game–which hasn’t officially been announced, but seems to be a given due to the recent release’s popularity. The next game will be a milestone for the franchise, as it marks the tenth game in the franchise.

The best Batman games of all time, ranked
Mortal Kombat 11 will not receive any more DLC, NetherRealm says
Mortal Kombat director says the reboot differs from original ‘on pretty much every level’
The best video game movies of all time
Google Stadia shutting down in January and users are getting full refunds
The best Xbox Series X games for 2022
The best games for Steam Deck
Save over $1,000 off a new gaming PC with this Alienware clearance sale
Best gaming laptop deals for October 2022
Pokémon Scarlet and Violet: all confirmed Pokémon
The best games of September 2022: The Last of Us, Splatoon 3, and more
‘Wordle’ today, September 30: Answer, hints, and help for word of the day (#468)
The best Mac games for 2022