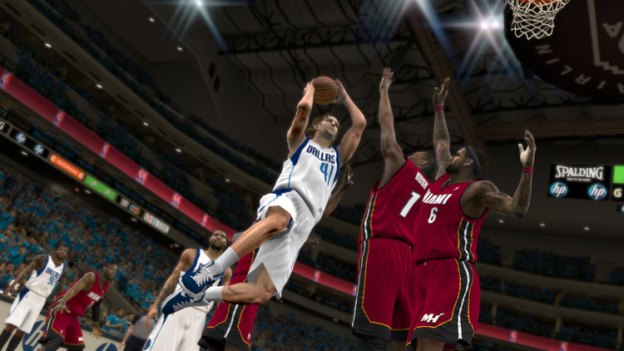 I don’t really know basketball all that well, but that didn’t stop me from leaving a hands-on session with 2K Sports‘ upcoming NBA 2K12 thoroughly impressed. See, I might not be a basketball guy, but I can appreciate a deep, engrossing gaming experience, especially when you’re throwing around genre acronyms like “RPG.” That’s the direction sports simulations have been moving in most recently, 2K’s NBA series included, but the level of immersion in the October 4 release is so thorough that it borders on being ridiculous.

It’s not, though. It’s very cool and in-depth, and it has me interested in playing this year’s entry in the series.

The demo session started with a look at My Player, in which you craft a basketball rookie from the ground up. Most of the early customization bits are familiar; you set his vital stats, tweak his look using a dizzying array of tools, and pick out what kind of player he is, which influences the initial dispersal of your skill points. You can even do things like set up your player’s signature moves — there are at least 20 or 30 different slots here, each for different on-court situations, including 10 custom dunks — and tweak the look of his shoes (more on that below).

Once the basics have been set, your player is sent off to compete in the Rookie Showcase, a sort of reverse all-star game in which the league’s rookie’s step up and do their best to wow team scouts prior to the NBA draft. Your performance in this game is graded, with an on-screen meter filling or emptying toward the next higher or lower grade based on how you perform. Sticking to your position and playing as part of the team appears to be very important here; at one point, my player drew a foul but the game classified it as a “good foul” and awarded me with a boost to the grade meter.

The grade you earn determines your eventual draft ranking. In the rookie showcase and all career games that follow it, you’ll be sent out with a series of objectives that can be completed in that particular game for bonus skill points. This could be anything from scoring a C+ or higher (as was the case in my rookie showcase) to sinking a certain number of baskets. And when you’re not performing up to your abilities, the game will respond in kind with real-time feedback on your performance.

Taking it off the court

After the rookie showcase concludes, your player sits down with three team GMs for a series of interviews. The 2K rep compared the makeup of these scenes to the dialogue exchanges in Mass Effect, and he’s not wrong, though it’s much more simplistic than that. Each GM asks your player two questions, which can get pretty specific based on what position your baller plays, who he’d be joining on the team in question, the location itself (the Minneapolis GM asked my player if he could handle the cold weather!) and so on. Your answers here can help influence which team will ultimately sign you to a contract.

The draft comes next, and it features a rather interesting artistic choice. After a brief intro from league commissioner David Stern, the draft proceeds as it would on TV, with each team taking turns picking a rookie to sign up. Here’s the catch though: You can’t skip past this. 2K reasons that skipping the draft essentially sucks the excitement out of what should be an unpredictable experience. There’s a desire for players to feel the anticipation of the next pick, whether or not it will be their player. I can’t argue with that reasoning, though I still think it’s an odd thing to limit the players’ freedom on.

Skipping to the good stuff

After all of that preliminary stuff is done you get to look over your contract — which can be renegotiated further down the road, when you’re worth the investment — and start your new gig as a professional ball player. NBA 2K12 adds a pretty brilliant new twist to the RPG-style happenings in 2K12; a new menu option allows you to “Play next key game,” which basically means you skip any number of games between the present date and your next milestone appearance.

The long-haul tedium of this sort of mode in a pro sports simulation is often what stops all but the most dedicated and hardcore fans from playing midway through their first season. The “Play next key game” option is an attempt to address that, and offer more casual fans a way to enjoy the best that the mode has to offer. It’s an amazingly simple addition that nonetheless holds great promise. You can track the progress of your various milestone challenges — broken up between game, season and career — in a separate menu.

Once your career is underway, there are a few off-court elements that you can manage. My Shoes is pretty much what it sounds like: your sneaker customization mode. While it doesn’t really influence your career in any way, the range of customization options for your sneaks once again border on the ridiculous. It sounds like you can expect to see more styles added in along the way as well, as the 2K rep confirmed that it’s possible to update this (and other elements of the game) without jumping through all of the hoops necessary to release a formal content update.

There’s also a My Purchases menu that lets you play with the money you’re earning as a pro basketball player. Checks come to your baller every two weeks, and you can spend it in the store to buy things like skill points and raised attribute caps. You can also spend it on things like “host a youth basketball clinic” or even “host an NBA 2K12” tournament for various boosts or unlocks. Many of the benefits you can earn here tie to the My Buzz menu, where players can track their player’s popularity within the team, across the league as a whole and with local fans.

Then there’s Create A Legend mode. Fundamentally, it’s very similar to My Player. The big difference is that you’re not necessarily working your way up the ladder as a rookie. In this mode, players select any pre-existing athlete in the NBA, no matter what stage his career has reached, and plays the simulation, as if in My Player, from there. You’ll still be able to improve your chosen Legend’s skills and use many of the other features seen in My Player, with the difference here being that you’re working with a known quantity.

NBA 2K12 already has some solid fundamentals in place, as you learned in my previous hands-on preview with the core game and NBA’s Greatest mode. The My Player and Create A Legend modes only sweeten the deal, especially if you’re the sort of sports-loving gamer who likes to dive deep with the day-to-day concerns of being a professional athlete. Look for NBA 2K12 in stores on October 4.

Everything we know about S.T.A.L.K.E.R 2: Heart of Chernobyl