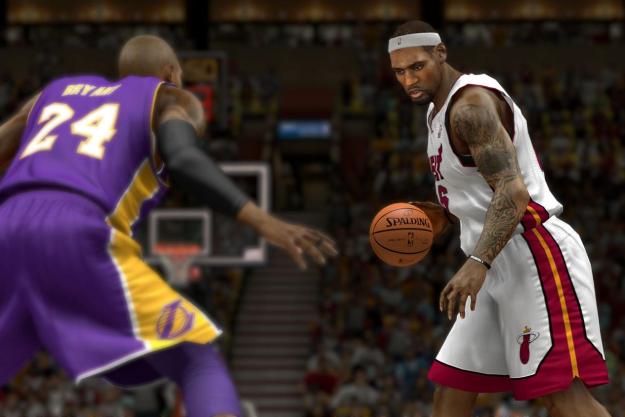 “Still one of the best sports franchises around, but the next gen versions can’t get here soon enough.”

There came a point while playing as the Heat in a 2014 NBA Finals matchup against the Houston Rockets that may have typified the entire NBA 2K franchise for me, even as I laughed at it. Pounding the boards next to James, Bosh, and Wade was the former number one draft pick, Mr. Glass himself, Greg Oden. As a Portland resident I was amused to see NBA 2K14 talk about how effective he had been for the Heat that year, despite being so brittle during his time as a Trailblazer that a stiff gust of wind could have cost him three games. But in some ways it also helps to explain why 2K Sports has been able to repeatedly deliver annual basketball games that feel fresh, even when they are not.

…there may not be a lot of changes, but the few included make a big difference.

Unlike many other pro sports that get annual video game releases, a single player can have a massive impact on a team in basketball. 2K14 predicts the Rockets to be a championship contender thanks to the addition of Dwight Howard, which is very possible in real life, and this is mostly unique to the sport. With the possible exception of a few elite players, adding single player in football or baseball may help, but it won’t radically transform a team like it will in basketball. A good trade or a high draft pick can turn a team from mediocre to contender – just look at the difference LeBron alone made to the Cavaliers. This is a philosophy that is somewhat shared by this year’s 2K Sports game: there may not be a lot of changes, but the few included make a big difference.

Beyond the normal roster changes you’d expect of any annual sports game, and beyond the presentation tweaks like pre-game intros that most people skip through after seeing them a few times, the main additions to the game are found in the introduction of this year’s signature mode, starring cover athlete LeBron James, and the new “Pro Stick.” Of the two additions, the pro stick is the real difference maker.

The Pro Stick system takes the right analog stick and turns it into an intuitive input for dribble movements and commands. Hold the stick in any direction while in possession of the ball and your player will jump up to shoot; let it go to release the shot, and timing is the difference between a swish and a brick. Start your move with a half circle or quarter circle for a spin move, or quickly shake it side to side for a stutter step that leads into a shot. There are dozens of movement options, and they string together like a series of combos in a fighting game. It adds a level of fluidity that not only gives you precise control, it offers a new way to play a basketball game.

Like adding an all-star to a team, the Pro Stick changes the makeup of the series without fundamentally altering it. It gives players more options, but doesn’t force them to use them. The old controls remain, with the face buttons still retaining the same functions as ever: hit a button to pass, another to shoot, one to jump, etc., etc. If you have played a basketball video game in the last few years, you can at least feel comfortable on a basic level.

The Pro Stick is surprisingly easy to feel comfortable with (especially after running through the simple and comprehensive tutorial that explains the new options in bite-sized sections). It improves defense as well by allowing you to pressure opponents more than ever before by pressing the stick towards oponentes, and also combines with the trigger/shoulder button (depending on the system) that was previously mapped to the dribble modifier, to create new passes, including no look bullets and easier alley-oops.

[The Pro Stick] offers a new way to play a basketball game.

The other new addition is the “Path to Greatness” featuring LeBron James. Each year NBA 2K introduces a signature feature, and this year it puts you in the shoes of LeBron as he tries for a third consecutive title, and then a fourth, fifth, and sixth. The eventual goal is to beat Michael Jordan’s six championships, and you can do this in two ways.

The first is to make Miami into a true dynasty, while the second is to leave South Beach for New York, and then back to LeBron’s original home with the Cleveland Cavaliers. In terms of actual gameplay, it plays out much like any standard team game in NBA 2K14, but the difference is the detail in the narrative. Throughout LeBron’s increasingly stellar fictional career, the commentators – Kevin Harlan, Clark Kellogg, and Steve Kerr, along with sideline reporter Doris Burke – craft a story, both about LeBron’s journey and that of his opponents. Teams like the aforementioned Rockets will have their season recapped during the game, with its players having their own highs and lows discussed.

The remaining modes, including the Association and MyCareer, return, and both remain mostly unchanged. There are a few tweaks to things like free agency that is now based more around in-game market value than before, but it’s a minor change. MyCareer remains an addictive RPG-like mode and there are some new player attributes to pick up, but the presentation remains just as it has for years now. Even the questions you are asked by teams prior to being drafted are identical, as are your answers, including the voice tracks.

The graphics are also beginning to show their age. They remain mostly unchanged and carry over some of the same issues from last year, including occasionally frightening and grotesque faces that will haunt your dreams, as well as clipping issues that will haunt your gameplay. When several players all go for a rebound at once, it isn’t uncommon to see bodies move in awkward ways and occasionally pass through each other. The character animations look fluid and crisp, however, if dated. The next gen versions can’t come soon enough.

It helps to already be a fan of LeBron if you’re going to get the most out of the Path to Greatness, but the mode does have a lot to offer – unless you despise the guy, in which case you are better off sticking with NBA 2K13 even with the new controls.

The changes, while good, aren’t a major shift from last year’s also excellent edition. The next-gen versions should significantly help with the graphical issues, but it is time for some changes to the Association and MyCareer modes. That said, the series still offers one of the best sporting experiences around.

This game was reviewed on a PlayStation 3 using a copy provided by 2K Games.