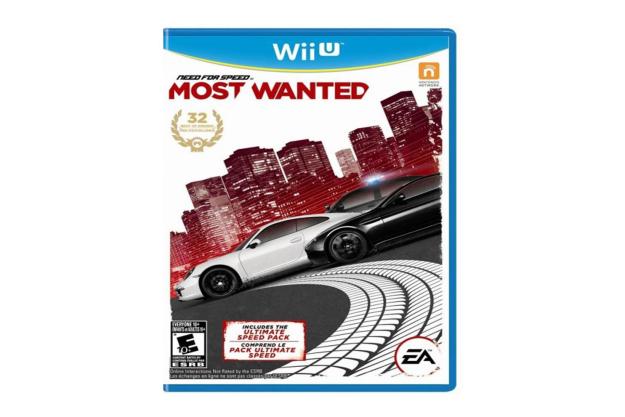 Need For Speed: Most Wanted U
Score Details

“For Wii U owners starved for something to play, this is one of the best games out there.”

I reviewed Need for Speed: Most Wanted when it came out last fall, and came away dually impressed after spending time with both the PS Vita and PS3 versions. It was a game that was different in fundamental ways from Criterion’s first open world racer, Burnout Paradise, but equal. In returning to the game on Wii U, which has its own particular features, I wanted to play Need For Speed alongside its spiritual predecessor. I came away with two distinct impressions: First, Need For Speed: Most Wanted U is a better racing game than Burnout Paradise, if not a better game all around. Second, even though the changes introduced in the Wii U version of the game don’t necessarily justify double dipping for anyone that’s already played, it is unquestionably one of the best games on Nintendo’s machine.

For those of you that missed Need For Speed: Most Wanted in 2012, Criterion’s second game in EA’s perennial racing game franchise doesn’t share much in common with previous entries. Like the original Need For Speed: Most Wanted from 2005 and Criterion’s own Need For Speed: Hot Pursuit from 2010, this game has you occasionally trying to out drive cops as well as fellow street racers. Criterion’s Most Wanted is an open world game though, focusing on exploration as much as the races themselves. The city in question, Fairhaven, is a beautiful but sterile modern American metropolis, surrounded on one side by mountains and forests and ocean on the other. Cars are scattered everywhere, nestled in hidden pockets around town, waiting for you to “jack” them. Once you’ve found a car, whether it’s a Lamborghini Gallardo or a dinky Ford Focus, you can warp to it any time to tackle one of its particular races.

Those races are it for set challenges in Need For Speed’s campaign. There’s some variety in between, however. The first race in that Lamborghini is a strait sprint through tunnels in downtown Fairhaven, while the second is a winding course around its outskirts. Some smaller off-roader ready roadsters like the Lancia Delta HF Integrale have you race the city’s equivalent of a rally, with jumps over train tracks and through railroad yards. All the races are excellent, their raw speed exhilarating in a way that Burnout Paradise could never capture thanks to a combination of Criterion’s impressive graphical flare and the way the camera hugs the back of the car rather than keeping its distance. The rewards give each car a fine feel of progression too, with nitro boosts and different wheels unlocked depending on how you place.

The races are all Most Wanted has to offer though. Once you’ve unlocked enough cars and earned enough driver points, you can challenge the ten Most Wanted cars in special races on the road to becoming Most Wanted yourself. The crazy activities of Paradise, competing in events where you try to rack up points by crashing opponents vehicles and doing tricks are wholly absent. There are still plenty of tricks to pull off, smashing billboards and finding jumps around the world, but they’re not a core part of the campaign and they are sorely missed. Online multiplayer goes some way to fixing that with a wider variety of challenges – one mode has you and your opponents jumping at each other trying to just miss – but none of those events have been added to the campaign on Wii U even though they easily could have been.

Taking U For A Ride

What is added to the Wii U is a mix of fascinating and frustrating. A few extra cars previously available on other versions as downloadable content are included right on the disc. The Wii U version is also gorgeous, one of the best-looking games on the system. Criterion was actually able to add textures from the PC edition of the game that were missing from the PlayStation 3 and Xbox 360 versions, thanks to the extra RAM available on Nintendo’s console. For the most part though, to be perfectly honest I couldn’t spot a visual difference between this version and the PS3 version; both are beautiful. The Wii U version will let you play right on the GamePad screen, however, which is a perfect touch.

The biggest addition is the Co-Driver mode. A layout on the controller’s screen lets you manipulate the world of Fairhaven at any time. Change it from night to day, turn off the traffic, gussy up the cops or mark up the map at any time. What are a bunch of interesting conveniences when played on your own can transform the game when you’re playing with somebody else. If you’re driving using an old Wii remote and someone else is messing with the Co-Driver features, it can make Most Wanted’s races into unpredictable gauntlets. It’s a cool idea to be able to turn traffic off and on when someone’s barreling through tight city streets at 200 miles per hour.

Co-Driver mode’s improvisational nature is neat in practice, but not the game changer it could have been. Criterion didn’t built any new races or challenges in the game specifically for it, it’s just sort of there. Why not make some races that needed one player on the GamePad to change the conditions at certain times, like strange events where the car could only run if its day or night so the co-driver had to change the setting? Why not a mode where the co-driver could see where cops were waiting and had to draw a new route on the map? The new toy is fun, but it doesn’t change the game itself in a meaningful way.

Need For Speed: Most Wanted U is still the great racing game it was last year, one that capably stands next to its big brother Burnout Paradise. It’s a more exciting racing game than that classic, even if it lacks its humor and variety. For Wii U owners starved for something to play, this is one of the best games out there. The bells and whistles Criterion adorned this release with don’t intrude on that sweet racing, but they also feel like a missed opportunity. As such, Need For Speed: Most Wanted U isn’t the definitive version it could have been.

(This game was reviewed on the Wii U, courtesy of a copy provided by the publisher)

Can you play Switch Sports on a Nintendo Switch Lite?

What to expect from Computex 2022