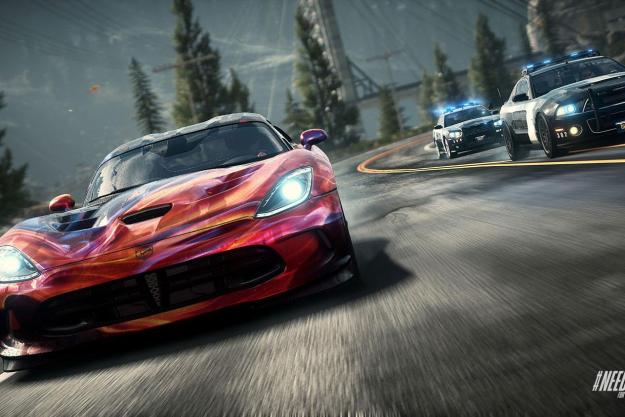 “If you like to bring grief to other players, this may be the racing game you’ve been waiting for.”

I normally shy away from writing reviews in the first person, but I decided to make an exception for Need for Speed: Rivals. You see, NFS:R isn’t just a racing game, it is a game that forces you to torment other players. Again and again. Allow me to explain.

It began shortly after the tutorial, in which you meet the game’s two factions: Cops and Racers. After a healthy guffaw at the notion that I’d want to play a cop, I was introduced to the four mission types available in the open world playground of Redview County for a racer.

The controls are built to make the impossible easy.

The first is “Race.” You have five racers, including yourself, all merrily slamming into each other on the way to the finish line. As you progress in the game and earn credits, you can purchase more durable and tougher whips but you also unlock weapons you can use, like a targeted EMP or a stun mine you drop behind you. Rubbing is racing, and cheating is strategy. The second mission type for Racers is “Time Trial,” a pure speed test that would later lead to one of the most frustrating moments in my long gaming career. I’ll get back to that. The third game mode is “Interceptor,” in which you try to lose a pursuing cop as quickly as you can. The fourth is “Hot Pursuit,” which is a race, but with multiple cops chasing you throughout. You can also roam around the game’s open world in search of other racers – AI and real players – that you can challenge to a head-to-head race. And if they don’t accept, you can always just wreck them and ruin their day for the hell of it.

On the flipside, you have a different set of missions to pursue when you play as Johnny Law, and you are encouraged to slam into suspects until their fragile shell of a car is a mangled nightmare. But you do it for justice, or whatever. “Rapid Response” is the Cops’ version of a speed trial. You are given a goal to head for as quickly as possible, ideally without destroying everyone and everything unfortunate enough to be in the way. “Hot Pursuit” for cops is the opposite of the racer version and puts you in the middle of a four car race with the goal of destroying everyone before they cross the finish line; the cop version of “Interceptor” puts you in the roll of cat to the racer’s mouse.

As a cop you can also patrol Redview County, seeking to right wrongs and help the populace by being an upstanding civil servant. Just kidding. If you see a real or AI racer, you can bump in to them to start a pursuit, which ends when they escape or you destroy them.

You select which side you want to play from your garage. You can – and should – swap back and forth often, but the experience you earn in the form of credits does not carry over, neither does the rank you earn.

Once you choose a side, you are given a choice of three objective sets to complete in order to rank up. These are usually straightforward goals like earn a certain number of points, complete a particular mission, and hit a few enemies with a specific weapon. Each set varies and the objectives increase in difficulty as you progress, but once you jump into the world you have as long as you like to complete them. Completing them also gives you a bit of backstory about how racers are taking over the county and cops are becoming more militaristic to stop them.

Completing these mission sets also unlocks new cars, and each set unlocks a particular type of car based on the style. So choosing a cop “enforcer” set, for example, gives you a slower, but more durable car, while “undercover” is faster and has better weapons. As a racer you have to then purchase the unlocked car to gain access to it, while as a cop you can just jump in – the tradeoff is that racers can improve any car by purchasing performance upgrades, while cops are stuck with the default stats of whatever car they choose. Racers have fewer cars to choose from than cops: 22 for the racers and 69 for the cops.

The missions grow old fairly quickly, leaving you with little to do but to wander the county and mess with people

Regardless of the side you are on, the race mechanics are smooth and easy to use. They lean toward arcade-style play rather than simulation, so it’s easy to pull off ridiculous drifts and hit corners at 90 mph, giving realistic physics the bird as you fly by. The controls are built to make the impossible easy, which is very much for the best. This won’t always help when you face “Pursuit Tech,” weapons that both sides can purchase and upgrade. Any car can carry two, and they always end up determining races.

The world of Redview County is open to explore for both Cops and Racers. Missions litter the map, and the county features a handful of different environments to race through, including a forest, desert, grasslands, and a small town. It’s hard not to immediately make comparisons to another open world racing game also set in a similar environment: Forza Horizons. That has a much, much bigger map and a huge variety of cars and missions though. It also doesn’t make you want to kill everyone around you. The next gen graphics, including a dynamic weather system that changes conditions constantly helps to bridge the gap though. NFS:R looks incredible on next gen systems.

Allow me to paint a picture for you. One of my objectives as a racer was to complete a time trial with a gold medal. For each mission you complete, you are awarded a medal rating on the Olympic scale, and the better your medal the more credits you earn. I failed the first attempt after hitting a tree that came out of nowhere and attacked me. I restarted, and that was when I met the gamer “IWetMyBed” (not a real gamer tag, but it’s how I choose to remember him or her.)

As I was about to complete a near perfect run, this other person decided it would be fun to slam into me head-on and wreck me. To be fair, at the time I was a Racer and they were a Cop, so that is part of the game. When you wreck another player, you also earn the credits they have on them – another fun little note about NFS:R is that you earn credits for all manner of activity, but until you head to one of the scattered headquarters around the map and “bank” your credits, if you are busted as a racer or wrecked as a cop.

I lost a few credits to IWetMyBed, and my hat’s off to him. I went back to the same mission and tried again. This time they came at me as a racer, caught up to me in my time trial, and hit me with pursuit tech just because they could. This became a theme.

The thing about NFS:R is that there really isn’t that much to do, and the world isn’t that big. The missions grow old fairly quickly, leaving you with little to do but to wander the county and mess with people. When you open up the world map, you can see where other real players are – and they can see right where you are too. It got to the point that I couldn’t complete a single mission and get back to bank my points without being destroyed by a passing gamer. Not once. I lost hundreds of thousands of credits. This is especially frustrating if the other racers have better, more durable cars than you do.

When I finally met up with a friendly gamer and we tried to do some races together, the four other players in our lobby seemed to activate their “Griefer-sense” and converge to murder us. I can only assume they smelled our innocence.

Need for Speed: Rivals encourages the griefing of other players by making it the most fun thing to do in the game. The controls are smooth enough to make the act of racing fun, but there just isn’t enough to do There are only seven mission types in total and the ramping difficulty as you progress doesn’t make them better, just harder. Instead, the thing to do is ruin everyone else’s day, or wait for them to get you first.