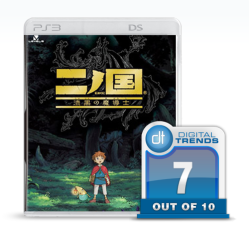 Level-5 has made the greatest Japanese role-playing game in history: A sweeping cartoon adventure in a familiar but still somehow surprising fantasy land, full of goofy looking monsters to draft into your service, friends to meet, magic to learn, and myriad kingdoms in need of aid. It’s a role-playing game where you take control of a simple boy who has lost something dear, and he’s willing to topple an ancient evil for just a chance to get it back. As a model of a nearly 30-year-old style of game design, the type of JRPG founded by Yuji Hori and Hironobu Sakaguchi, it is flawless. Other studios should stop making traditional JRPGs in the classic mold.

I’m referring of course to Level-5’s 2005 masterpiece Dragon Quest VIII. That game shunted Level-5 from a promising up and comer to one of the greats of RPG making. The awkwardness of its earlier games, namely the Dark Cloud series, was washed away. Collaborating with Dragon Quest creator Yuji Hori and series illustrator Akira Toriyama helped produce a sweeping vision of an RPG, where every inch of its vast overworld, each forest and mountain, was a place that could be explored on foot. Role-playing games are built to give an impression of grandeur, but Dragon Quest VIII was itself grand.

Ni no Kuni: The Wrath of the White Witch fits that description of Dragon Quest VIII above perfectly. Like that sequel, Level-5’s PlayStation 3 original (similar to, but different a Nintendo DS version) is an old-style role-playing game wrought as a lushly animated cartoon world. There are some differences: Studio Ghibli, whose Hayao Miyazaki-directed films like My Neighbor Totoro have made the studio the only living Japanese anime or manga producer more beloved than Toriyama, produced the art. Miyazaki’s regular collaborator, composer Joe Hisaishi, provides the score.

Level-5 took a break from traditional RPGs in the years since Dragon Quest VIII, focusing on action RPGs like Rogue Galaxy, online mutliplayer RPGs like White Knight Chronicles and Dragon Quest IX, and unique DS adventures like Inazuma Eleven and Professor Layton. With the artistic horsepower of Ghibli and its wealth of experience, Ni no Kuni had the potential to surpass that 2005 milestone. While Ni no Kuni is a fine game in its own right, though, it is ultimately less than the sum of its parts, a game that merely feels grand at times.

Ni no Kuni starts in a more vulnerable and personal place than Dragon Quest VIII’ adventure to save a king and princess did. You control Oliver, an honest boy who loves cars living with his mom in a small American town. (Like many Ghibli films, there’s a strange timelessness to Oliver’s home Motorville. There’s a ‘50s pastiche going on, with malt shops and slick roadsters, but it’s not explicit.) After saving Oliver from drowning, his mother dies of a heart attack, leaving Oliver alone with nothing but a stuffed animal to remember her by. When that stuffed animal comes to life and tells Oliver he’s the Pure-Hearted One, destined to save Another World, the two whisk off to train Oliver to be a wizard so he can possibly save his mom while also saving the world from the White Witch and her minion, the dark genie Shadar.

That’s a lot to cover in the first hour of a game, but Ni no Kuni handles it well, moving along at a swift pace before plonking you down in the green hills of Another World, a parallel world to Earth. From there, though, the game slows down significantly. Over the next 20 hours, Oliver slowly explores the central continent of the Another World, picking up the tools of the wizarding trade as he goes. Some of these are adventures, like undergoing the Great Sage’s trials in the desert, or following a kingly cat into sewers to get your first proper wand. Some of the less action-packed quests are full of emotion.

For example: Oli’s first party member, Esther, is cursed. In order to uncurse her, you have to travel back to Motorville and find her soulmate. (All people in the Other World are connected to people back home. This is how Oli plans to save his mother, by rescuing her soul mate from the bad guys.) Finding her soulmate involves literally bringing a broken family back together, saving a child’s father from nightmares caused by Shadar’s machinations, and helping a little girl overcome her fear of the outside world. It’s powerful stuff, made more moving by Oliver’s plight.

Moments like those are dragged down by dull stretches of inane fetch quests, though. Around 15 hours into the game, you need to convince the gluttonous ruler of Al Mamoon to give you passage on her boat. First you need to find out what her favorite food is, though, so you need to find her soulmate in Motorville.  But first you need to figure out what she looks like, so you have to wander into the local shops, pestering merchants for clues. As a set up for comedy and character building, this is perfect, but Level-5 wastes the opportunity with plodding pacing and low stakes for the characters.

Even the combat lacks energy. Oliver and his friends do combat with familiars, little cartoony beasties you collect throughout the Other World, like Ghibli-fied Pokémon. Each character can hold up to three familiars, and you spend a lot of time giving them little treats to help them evolve into new forms. No fight takes advantage of this endless variety, though. Attack, attack, spell, heal: The same routine of the most basic RPGs rears its head here, but fights often lack the speed, charm, or strategy of those in better examples like Dragon Quest VIII. Fights are not so much hard as they are blunt, and the simple level grinding will make even the toughest boss a pushover. Compounding this problem is the fact that the full array of fight options aren’t available until well into the game, when the third character, thief Swaine, joins up.

For all these problems, though, it’s hard to not be charmed by Ni no Kuni. Especially once you can travel the world map by boat, the Other World is a gorgeous place, even if too few adventuresome things take place in it. It may not be as funny as Dragon Quest or Ghibli’s films, but it’s warm all the same. Helping two crabs that are buddies find one another across islands in the south seas is just one of the light, sweet things you can get up to. The Wizard’s Companion, Oliver’s book of spells and guide to the Other World, is entertainment in and of itself, full of short stories and facts about the world that shame the kind of background material found in adult RPGs like Mass Effect and Skyrim. And then there’s Mr. Drippy, Oliver’s stuffed animal turned fairy companion. He’s a weird cross between Scrooge McDuck and Meowth, a pragmatic, funny little guide to the world. Listening to him talk is often enough motivation to keep pushing into the game.

That Level-5 was willing to devote the resources to making such a beautiful, fleshed-out fantasy game is admirable. Almost no game publisher is willing to make games like this on such a scale anymore. The result of its efforts is a game that is very good, warm and charming. It isn’t great, though. Last time Level-5 made a game like this, they made the “Mona Lisa,” a simple, flawless work of art. Ni no Kuni’s failure is that it tried to match it.

PlayStation Plus subscribers will want to dive into May's free games for the PS4
No longer a PS4 exclusive, ‘Ni no Kuni 2: Revenant Kingdom’ is coming to PC
PSX 2016 offers RPG fans a glimpse at gameplay combat in 'Ni no Kuni II'
Tales from the Borderlands and some Japanese oddities lead this week in gaming
Xbox and Bethesda’s Developer_Direct: how to watch and what to expect
Goldeneye 007 comes to Game Pass and Nintendo Switch later this week
The best iPhone games in 2023: 31 games you need to play right now
I can’t believe I’m recommending Forspoken on PS5 over PC
Redfall’s May 2 release date revealed during Developer_Direct
The best Fire Emblem games, ranked from best to worst
Xbox just surprise announced and released a stylish new Game Pass title
The Elder Scrolls Online’s 2023 updates bring players back to Morrowind
How to cheat in Words With Friends