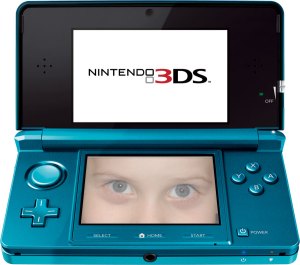 Nintendo was plagued by consumer concern late last year after it warned the public that prolonged use of its 3DS could lead to eye fatigue. But while treating the handheld gaming device as a babysitter could be putting children’s eyes (among other things) in danger, experts are now saying the system could actually have some optical benefits.

According to optometrists, the 3DS can serve as an assessment of eyesight in youth. Putting the device in the hands of those under six and analyzing their reactions to the 3D screen can help catch any vision disorders early on and allow parents and doctors to find solutions. “The 3DS could be a godsend for identifying kids under six who need vision therapy,” associate director for health sciences and policy for the American Optometric Association Michael Duenas told the Canadian Press.

So how exactly will the 3DS illuminate vision issues? If a young user is unable to see the 3D, it could be possible he or she is affected by amblyopia (which is the technical term for a lazy eye). It could also be a less noticeable issue, like problems that could cause reading difficulties. If a young gamer becomes dizzy, uncomfortable, or disoriented while using the 3DS, schedule a trip to the optometrist.

There is disagreement in the medical community regarding to what degree the 3DS will actually help “pre-diagnosis” eye issues in children. While some believe it will provide more opportunity to target vision problems early on, other say this is pure speculation. It’s still unknown what the long-term effects of overuse of a 3DS could be, and of course health professionals are more worried about one problem gaming systems cause: obesity. “Kids should be out running around,” noted director of the Vision Performance Institute at Pacific University Jim Sheedy.

But if the 3DS can get even a few optometrists singing its praises, it might be able to offset those early concerns about the device damaging young eyes.

Nintendo’s 3DS discontinuation marks the end of an era for handheld gaming
This Borderlands 3 minigame will help map the bacteria in your gut
Nintendo employee contracts coronavirus, co-workers put in quarantine
Nintendo 3DS nowhere to be seen at E3 2019, but apparently not yet dead
Cyberpunk 2077’s Steam success is great, but we can’t rewrite its history
Razer’s 5G-enabled handheld gaming system is getting a public release
Gunbrella turned me into shotgun-toting Mary Poppins
The best PS5 exclusives
The best Xbox Series X exclusives
Sony’s PlayStation PC selection grows in October with Sackboy: A Big Adventure
‘Wordle’ today, September 29: Answer, hints, and help for word of the day (#467)
Fortnite Chapter 3, Season 4 guide: All week 2 quests and how to complete them
All Fortnite Chapter 3, Season 4 quests