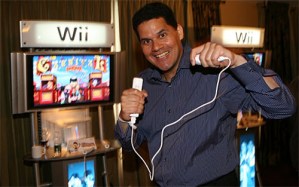 Although the current generation of video game consoles– called the seventh-generation– seem to be just now hitting their stride, many are already wondering when the we might see the eighth-generation. According to Nintendo, it will be a little while yet.

In an interview, Nintendo America’s CEO, Reggie Fils-Amie, claimed that a new Nintendo console is not on the immediate horizon, and the release of the next generation of Nintendo will be determined by the continued success of the Wii.

“As we sit here today we’re saying the Wii has many, many more units to sell,” Fils-Aime said. “After we’ve reached an installed base of 45 million here in the U.S., we can have a conversation about the next generation.”

For many it might seem that the demand for another generation of consoles is not there yet, but based on previous history, it seems to be time for the eighth-generation. With the exception of the original NES which was the sole Nintendo console for nine years, the video game industry has seen a new console released every five to six years. The Xbox 360 just celebrated its fifth anniversary, while both the Wii and PlayStation 3 are four years old.

While the Wii is still under that five year mark, unlike the other consoles which continue to build upon their systems through software updates and peripheral innovations, the Wii is slightly behind the curve in terms of hardware specs. That doesn’t make it any less of a console, as the nearly 75 million units sold worldwide can attest to, but it does put the Wii at a bit of a disadvantage as the system begins to show its age compared to its competitors—the lack of HD video and scarce online community for example, being a key arguments in favor of a new Nintendo system.

So with the traditional five year window arriving, many are looking to the future in curiosity, perhaps more than anticipation. Capcom’s COO claimed back in June that the next generation of consoles was at least 2-3 years away.

Unlike previous generations of consoles, the lack of new gaming systems seems to be less about advancing technology, and more a certain level of comfort from the companies. The PlayStation 3 is finally turning a profit on each unit sold and is preparing to present games in 3D, while the Xbox 360 has recently introduced a slew of new features to its console, including ESPN streaming, and the Kinect hardware. Both systems continue to show solid sales figures, especially compared to the Wii, which is slowing down- something that wasn’t unexpected considering the massive sales numbers the console has already put up. Nintendo, Microsoft and Sony are all deep at work on their next systems, but none seem to be ready or willing to move ahead with them.

So it looks like we might not see a new console for several years yet, which is not necessarily a bad thing, especially in a recession-weary world. But if and when Nintendo manages to hit that magic number of 15 million more units sold in the US, the next great console war may begin.

Our 5 biggest predictions for the September Nintendo Direct: Metroid, Zelda, and more
Disney Dreamlight Valley sets itself apart from Animal Crossing in 5 key ways
Cyberpunk 2077’s Phantom Liberty DLC not coming to last-gen consoles
Rocksmith+ launches next week, and it’ll cost you at least $100 a year
Splatoon 3’s multilayered grind has me completely hooked
The best Metroid games, ranked
The PS5 games with the best graphics
Warzone: Tips and tricks to conquer Rebirth Island during Season 3 Reloaded
Deathloop on Xbox doesn’t change much, but is still great
The best Zelda games, ranked from best to worst
The Xbox Series X games with the best graphics
The best mouse for 2022: top wireless mice tested and compared
The best Intel processors for 2022