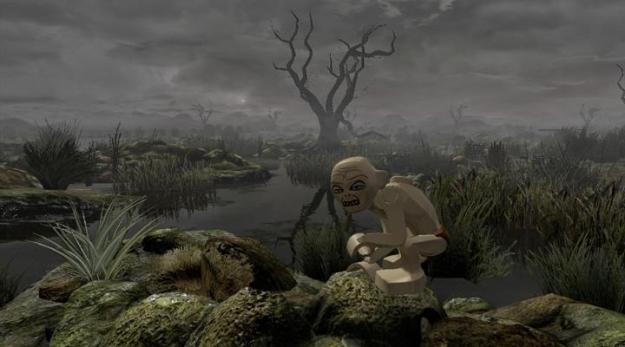 If you are familiar with any of the Lego games from Traveller’s Tales, then you probably have a good idea of what to expect from The Lord of the Rings: The Video Game. The game is based on the three Peter Jackson movies rather than Tolkien’s books, and it translates a property that is well known, instantly recognizable, and adored by millions. The Lego formula is simple and tested: take beloved properties and translate them into a Lego world, then add humor, and this game is no different.

The game combines all three movies into one package and translates them using the traditional Lego style. You move around familiar locations in teams that allow you to either jump between characters with the touch of a button, or play co-op with a friend. Destroying enemies and objects releases bolts, the currency in the Lego-verse, and you will also stumble across the odd structure that you can put together to in order to complete an objective or progress. In terms of gameplay it is the same style that you are familiar with if you know the Lego brand. If not, it is a straightforward action game with a hack-n-slash slant that gamers of all age will appreciate.

In the demo the TT Games is currently showing off, the Battle of Helm’s Deep was recreated. In the film The Two Towers, this was an intense battle that saw a lot of death and destruction. In the the game, at one point a Lego-tized Peter Jackson, who is acting as a defender just as he did in the film during a cameo, looks for things to throw and decides that his Oscar would make a decent weapon. At another moment, a Lego uruk-hai begins a slow-mo run towards the explosives-filled gap at the base of the wall, and it will probably have you laughing out loud.

The game also features voice work that could change for the final release, but it appears that TT Games will continue with actual voice actors, something that was just introduced in the recent Lego Batman 2: DC Super Heroes. Regardless, the demo seemed to stick close to the script. The actions, however, were out right funny. Lego Aragorn and Lego King Theoden riding out into an unsuspecting horde of Uruk-hai was priceless.

The game will appeal to fans, but the only downside is that it retains the same style that has been used for Lego games for years now. It is simple and easy, which makes it accessible, but it also feels a bit stale and in need of an upgrade sooner or later.

The inclusion of 60 or so characters, all with multiple weapons, should have both fans of the Lego games and fans of The Lord of the Rings paying attention when this game is released in October for Nintendo DS, 3DS, PC, PS3, PS Vita, Wii, Xbox 360, and possibly even Atari and ColecoVision just to complete the set.

Best video game deals for November 2022
The best Xbox One games to play right now
The best video games of October 2022: Mario, Bayonetta, and more
The best indie games of all-time
The best weapons in Modern Warfare 2: every gun ranked
Pokémon Scarlet and Violet: How to beat the Elite Four
The best Intel processors for 2022
Call of Duty: Warzone Mobile: release date and preregistration details
Monster Hunter Rise is coming to PlayStation and Xbox, minus cross-platform saves
Best gaming laptop deals: Save on Alienware, Razer and more
‘Wordle’ today, December 2: Answer, hints, and help for word of the day (#531)
Elden Ring for PS5 is $15 off with delivery in time for the holidays
The best iPhone games to play in December 2022: Marvel Snap and more