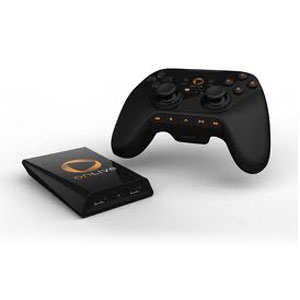 OnLive is a cloud-based gaming service that delivers high-quality visuals and AAA experiences on any computer with a steady high-speed Internet connection, meaning that even your $100 netbook can be made to run a version of Batman: Arkham Asylum that looks and plays almost exactly like it would on an Xbox 360 or PlayStation 3.

It’s the rare “science as magic” tech promise that actually delivers, though OnLive is still struggling to find its place as it competes with giants like Microsoft and Sony and the well-established gaming communities that have formed around each. The company’s latest promotion attempting to sell you on cloud gaming is a good one: purchase a Full PlayPass — the OnLive equivalent of a full game purchase — for THQ’s Homefront (March 15 release) and get a MicroConsole for free, along with a Full PlayPass for another solid first-person shooter, Metro 2033. OnLive’s MicroConsole is a little box, roughly the size of an Apple TV device, that brings the service directly to your television, for $99.

Customers who purchase Homefront will get the MicroConsole free of charge, though the fine print reveals that your new toy won’t ship until after the deal ends on March 14. You’ll also have to pay taxes on it, as well as shipping charges. Still not a bad deal, $60 for roughly $200 worth of content.

Then again, the existence of such a deal causes some justifiable concern that your purchased items might not be available for as long as you’d like them to be. OnLive has offered several similar promotions in an attempt to get the MicroConsole into the hands of gamers so they can see for themselves what the technology offers. The fact that we’re still seeing such offers so many months after the service’s launch does not speak of good tidings for its future solvency.

Which is a great shame. If OnLive had launched five or so years ago, when the current generation of consoles was still finding its footing, there’s little doubt that OnLive would have been as robust a contender today as the Microsoft and Sony consoles. Unfortunately, the cloud gaming service entered the market after it had fully matured, meaning that a community would have to be built, at least in part, out of users stolen away from other platform.

With a small catalog of available games compared to the consoles and no exclusive content to speak of, OnLive may well be too little, too late. The tech is amazing, no question of that, but it is so for offering a lower-cost alternative to what we already know. When you’ve already dropped a few hundred dollars on a console and countless more on its games, paying less for a fresh start with a new gaming community just doesn’t seem as attractive a proposition.