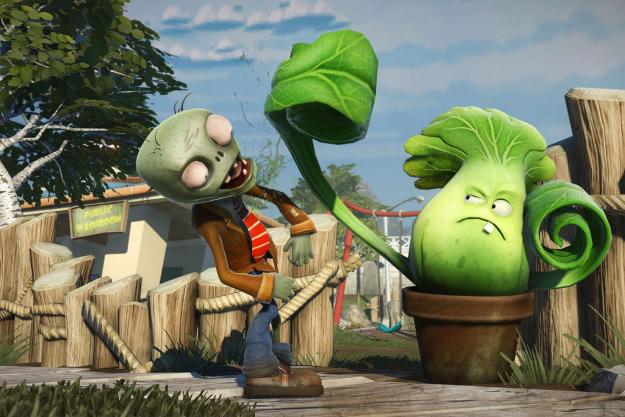 “Plants Vs. Zombies: Garden Warfare injects some fresh ideas into its multiplayer shooting, but PopCap Games' lack of genre experience is apparent.”

Plants Vs. Zombies is a fascinating proposition as a shooter. PopCap Games’ colorful fictional universe already boasts a diverse cast from the series’ mobile appearances, and the contentious struggle between smiling plants and their natural enemy, the groaning zombie, makes as much sense in a shooter as it does in a lane-based strategy game. PopCap is also a member of the Electronic Arts family, meaning it can carve out kid-friendly shooty shooty in the mold of Battlefield, relying on DICE both for input and for its increasingly ubiquitous Frostbite 3 engine.

Given PopCap’s proximity to the Battlefield developer, you’d expect the third-person shooting action in Plants Vs. Zombies: Garden Warfare to sizzle. The game does have its share of standout elements, but uneven design too often works against the competitive team vs. team combat at its heart. And yes, let’s be clear up front: this game is a multiplayer-only proposition. There’s competitive and cooperative content, but this isn’t something to pick up if you’re looking for a robust single player experience.

Given PopCap’s proximity to the Battlefield developer, you’d expect the third-person shooting action in Plants Vs. Zombies: Garden Warfare to sizzle.

The individual pieces are at least promising. It’s easiest to look at Garden Warfare as a family-friendly alternative to Battlefield, as both the scope of the action and the emphasis on multi-class team play falls right in line with the DICE shooter. PopCap goes a step further when it comes to soldier classes though, with an asymmetrical class layout that establishes a stronger factional identity than most shooters typically possess.

No two classes are the same in Garden Warfare. Even each faction’s basic infantry units – Peashooter for the Plants, Foot Soldier for the Zombies – don’t really match up. The Peashooter makes up for a slow rate of fire with explosive peapod bullets that do splash damage. The Foot Soldier carries a lower-damage machine gun as its primary weapon. Both have an explosive to shake things up with, but the Zombie’s Rocket Jump leans more toward vertical play, whereas the Plant’s Hyper ability is all about speed.

This asymmetric structure carries across all four of each faction’s classes. Plant and Zombie healers leans toward rearguard and front line duty, respectively. Both factions have a class capable of deploying an attack drone (garlic vs. robo-zombie head!), but one is a sniper and the other favors demolitions. Both also have melee-capable bruisers, but it’s stealth versus tank in the war between Plants and Zombies. The Plants favor finesse; the zombies run with the horde.

The classes differentiate even further as you dig deeper into the game. As you play Garden Warfare‘s three modes – two competitive multiplayer, one co-op wave-based survival – you earn coins that can be spent on an assortment of “Sticker Packs,” which unlock character variants, class-specific weapon upgrades, and Plant/Zombie summons for the game’s two objective-driven modes. There’s an addictive quality to tearing open new packs and seeing what goodies you got; it’s very similar to other EA games, like Mass Effect 3‘s Galaxy at War co-op mode, or any EA Sports title’s Ultimate Team mode.

The pacing for unlocks – which come almost entirely from purchased sticker packs – is a real problem, however. You simply don’t earn many coins from the various match types. Team Vanquish, which is essentially a friendlier way of saying Team Deathmatch, doesn’t carry any large rewards. Gardens & Graveyards, a point capture mode in the vein of Battlefield’s Rush where zombies capture gardens to open up more of the map until a final goal is reached, is lucrative, but only if it ends in a fight over the final location. There’s also Garden Ops, the wave-based, co-op survival mode, but it’s too much challenge for too little reward. You’ve got to survive all 10 waves – the last of which is brutal on the Normal difficulty, even with four players – to get enough payout to merit the time investment.

All of this would be easier to accept if there were more maps. There are eight in all, though Gardens & Graveyards – by far the most elaborate mode in Garden Warfare – has only three. There’s a real thrill that comes from unlocking a new character variant – which tweaks an existing class to look and play just a little differently; so the slow-firing standard Peashooter might be joined by one that boasts a higher fire-rate – but it takes so long to get to that point. There’s just not enough content to stem off a sense of tedium as you play the same maps and matches again and again.

It’s easiest to look at Garden Warfare as a family-friendly alternative to Battlefield.

More than that, the process of leveling up each class is frequently counter-intuitive to competitive shooter play. There are no experience points to be earned in the traditional sense. Level progression is tied instead to a series of challenges. Each challenge unlocks a star; get enough stars, and you rise to the next level. Theoretically, this is a cool way of keeping players focused on playing a particular class as intended. Unfortunately, an assigned challenge doesn’t always fall in line with how a particular class ought to be played.

Garden Warfare is built as a one versus the other struggle whether you’re playing in a competitive mode or a cooperative one; Plants are always going to be wiping out Zombies, and vice versa. Too often, progression-dependent challenges ask players to step outside of that framework and effectively “game” the game. It’s entirely sensible for a healer class to have a “Perform 5 revives” challenge, since healers revive downed players at twice the speed of the other classes. But why would that same challenge be given to a Peashooter or Foot Soldier? Sure, a revive helps the whole team, but it’s odd that a non-healer class would have to risk itself like that just to level up. It’s not what those classes are meant to be doing.

Other challenges depend more on luck than anything else. “Vanquish 3 Sunflowers in one session” or “Blind 10 potted plants with your Zombie Stink Gas” require maps and loadout selections on the opposite team that support these conditions. What’s more, examples like those two speak to a wider set of challenges that just push you to play in a different and not necessarily team-friendly way. There are plenty of challenges that do support the style of play a given class depends on, but you never quite shake the feeling that you’re grinding out each new experience level.

It’s unfortunate that the long-term play hooks can’t dig themselves in a little deeper, as there’s a solid foundation here. The game’s sprawling maps are clearly built with the asymmetrical class structure in mind, and they’re even a joy to explore in the heat of combat as you stumble across new flanking routes and surprise ambushes.

PopCap leveraged Frostbite 3 in some impressive ways as well. The Xbox One version of the game is simply gorgeous, brimming over with colorful landscapes and some of the most eye-catching particle effects we’ve seen yet on the new console. Even the paucity of content – three modes, plus two “Classic” (no custom loadouts) variations on the pair of competitive modes – doesn’t foul up the good times… at least not until the tedium of grinding sets in.

It’s also worth mentioning that Garden Warfare seems to be struggling with some of the same online connectivity issues that have plagued other multiplayer-focused EA games. It’s not nearly as bad as, say, Battlefield 4 was at the tail end of 2013, but our post-release review play was riddled with server disconnects and other connection errors. You’ll get into a match, but it might take a little extra time.

Let’s be clear here: this is PopCap’s first attempt to build a proper, modern shooter, and in that context, Plants Vs. Zombies: Garden Warfare is worthy of praise. This is not a bad game at all. It’s beautiful, it controls well, and it’s got one of the most unique class-based multiplayer setups we’ve ever seen. The problem, unsurprisingly for a shooter newcomer, comes down to the nuances of the design. The big pieces are there, and they’re pretty great, but the deeper, less tangible hooks could have used a bit more playtesting and polish.

The good news is, this is a franchise with long legs. We’ve seen plants wage war against zombies before, and we’ll see them do it again. Things will get better in this game as well. Popcap hasn’t been shy about promising an influx of free content packs (again, think ME3‘s Galaxy at War). Plants Vs. Zombies: Garden Warfare is a good time, make no mistake. But it definitely could have been better.

This game was reviewed on an Xbox One using a copy provided by Electronic Arts.