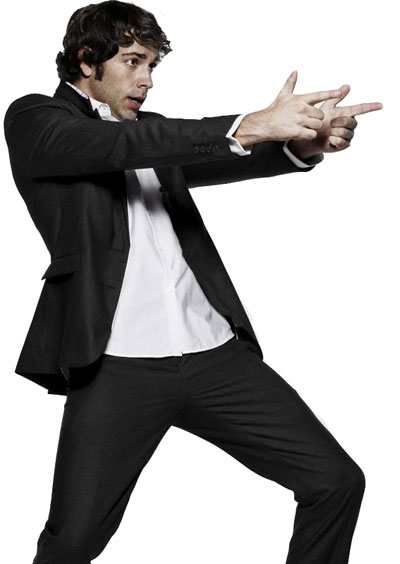 There’s a reason video games have been so integrated into NBC’s “Chuck” TV show over the years. Zac Levi, who stars as Chuck and has directed numerous episodes, is an avid gamer. He’s set up shop at Comic-Con 2011 with Nerd HQ, an off-site festival of video games, celebrities and technology with Xbox 360 as a title sponsor. But the actor has big plans for gaming beyond logging a lot of hours with Gears of War 3 (he’s a huge Gearhead). Levi is talking to some of his Hollywood friends – many of whom agreed to speak with fans at Nerd HQ – about creating a new cross-media video game adventure.

“I have all these ideas of what I want to do in combining these worlds of entertainment and technology because they’re worlds that I’m super nerdy about, and I want to bring that to the people,” said Levi. “I want to start a nerd evolution, man.”

Levi plays pretty much every game that comes out. He’s also become friends with some leading game developers, including Epic Games’ Cliff Bleszinski. Bleszinski is speaking at Nerd HQ at Comic-Con and Gears of War 3 is playable there throughout the event.

“Uncharted 2 had some of the coolest cut scenes that I had seen in a long time when it came out,” said Levi. “I’ve played LA Noire and it’s really fascinating. Along with the Mass Effect games, there are so many choices in how storylines play out. I feel like in the next five years, as graphic engines get better and as our kind of interactivity with Kinect and connectivity with like Xbox Live evolve, we’ll be able to have what’s been my brainchild — the first interactive television-show-movie-miniseries-video-game.”

Levi said the wait between games can be long. He’s been waiting along with the rest of the gaming community for a solid two years for Gears of War 3. He sees the game industry evolving beyond just the disc to more downloadable content.

“Instead of waiting a couple of years for a big game, why not release a game in chapters every month or so?” asked Levi. “This would allow an avid gamer more time to juggle between playing some Gears and Call of Duty and Fable or whatever. I’ll gladly wait a month for the next chapter of a game, and in waiting for that I’ll go play these other chapters of other games. So that led me to thinking about Xbox Live, which has 40 million subscribers and almost no original video content outside of The Guild. There’s no real half-hour or hour-long content for any of those subscribers to watch from Xbox original entertainment.”

What Levi is doing is filling that void. With “Chuck” renewed for the fall in what’s expected to be its final season, Levi has already reached out to friends like Seth Green and Nathan Fillion to see if they’d be interested in working on this project.

“I’d love to do is make a show where we’re a part of this team of rascals that do odd jobs on the edge of the galaxy and we’re flying around in our spaceship and we’re doing our thing and then all of a sudden our ship gets attacked,” explained Levi. “How cool would it be, instead of just watching the cut scene that our really talented computer graphic designers build, you could opt in and play through that same battle. Then you put your controller down and you keep watching the show. Then you get to a portion of the show where we have to go down on this planet to fight off some crazy alien monsters that are attacking a settlement, you could play a kick-ass level of a first-person shooter until you’ve defeated all the aliens and the story continues.”

Levi has thought out the premise. He added that once you’ve played through an installment of the single-player story campaign, players will unlock a multiplayer game that allows them to go back and explore those areas with friends.

“While you’re waiting for the next episode of this particular show, you can go and have fun with your friends playing these characters in a space battle or a first-person shooter,” said Levi. “By the end of the season, any fan has gotten a dozen episodes and roughly 24 levels of playable content, where they can sit at home and play with their friends online. And you’re bringing these worlds together in a way that I think is awesome.”

Levi believes Kinect could be implemented into the gameplay experience. He envisioned a scenario where the actors are in a Mos Eisley-type cantina and some Greedo-type character starts trash talking to you. The Xbox taunts you to stand up and when you do, the Kinect recognizes that you’re there and now you have to swing under his punch and punch him back.

“I think video games and consoles are really going to be able to bridge that gap between entertainment mediums in a way that in the next five to ten years it will all be totally seamless,” said Levi. “We’re all going to have one box that rules them all.”

Topics
The best Pokémon games, ranked from best to worst
Every video game delay that’s happened in 2022
The best multiplayer games on the PS5
The best PS5 games for 2022
Blaseball makes its absurd return in January with a dedicated mobile app
Amnesia: The Bunker takes survival horror into a ‘semi-open-world’ sandbox
Pokémon Scarlet and Violet Titans guide: locations, weaknesses, and more
All cross-platform games (PS5, Xbox Series X, PS4, Xbox One, Switch, PC)
The best weapons in Modern Warfare 2: every gun ranked
Pokémon Scarlet and Violet: How to beat the Elite Four
The best Intel processors for 2022
Call of Duty: Warzone Mobile: release date and preregistration details
Monster Hunter Rise is coming to PlayStation and Xbox, minus cross-platform saves