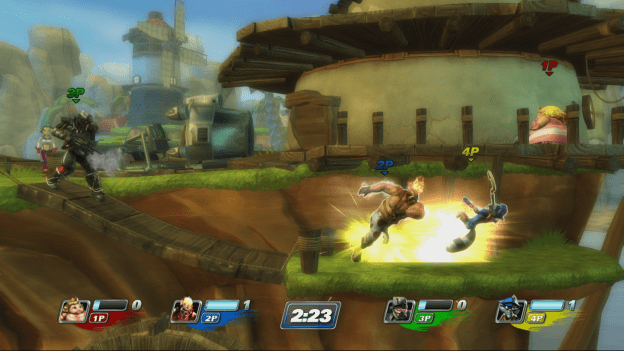 Last week following the official long-awaited unveiling of Sony’s PlayStation All-Stars Battle Royale, we had the chance to speak with developer Superbot’s Omar Kendall, All-Stars’ Game Director. Kendall has spent the better part of a decade working on fighting titles, from X-Men: Mutant Academy to UFC Undisputed to name a few. In terms of pure fighters, there are few people in the industry more qualified than Kendall when it comes to creating a new fighting title. But this one is a bit different.

PlayStation All-Stars takes the daunting task of picking some of the most beloved icons from the robust library of PlayStation characters, and then putting them in a game that will unavoidably and indirectly forever be competing with Nintendo’s uber-successful Super Smash Bros. franchise. Time will tell if they can pull it off, but for now we have a closer look at what to expect from PlayStation All-Stars Battle Royale, how the characters were chosen, and the process of adapting them in this exclusive interview.

How long has the game been in development?

The game’s been in development for about two years now.

The game was just announced last week (officially) but do you have a launch window?

Yeah, we are looking at holiday this year.

Is the game going to feature local multiplayer, online, or both?

Both. It was very important for us to have four dudes on the couch playing the game together. I think it’s been a long time coming–not a lot of games like that come out. I think this is going to go over really well in that sense. But it’s the modern era, we know dudes like to come home and jump online and find a quick match. We’ve got that too. We have some different modes online, like the tournament mode for the more hardcore dudes to go in there and prove who’s the best, and we have some more casual modes for people that just want to jump in and find a match and have some fun.

Can you mix online and local play?

Yeah, multiple configurations. We’ve got this party system where you can even rearrange, or pre-arrange. If you and I wanted to play, and I am at my house and you are at your house, we can pair up and match make online with strangers if we want to. Bunch of different options.

So far we have just seen four player free-for-all. Will there be co-op as well?

Yep, we support a wide gamut of team configurations, so of course 2v2, but we also have things like 3v1, and 1v2. We have all the permutations of team battle.

How many players max?

All the characters seen (and rumored) so far are all Sony exclusives. Will we see some third-party characters?

I think we wouldn’t really be doing the title a proper service if you only focused on first-party. Obviously PlayStation and Sony, they’ve got some great brands. But when you think about PlayStation and its long history, I think that includes third party. I think it only makes sense. A game like this, you’re going to see some third party characters.

Could we see any non-gaming characters?

Once the game has been released, can we expect the roster to grow through DLC?

Yeah, absolutely. We’re trying to do the best we can and listen to what players want now. I don’t think we’ll obviously get to everything, but there’s always room to add more down the road via DLC.

What was the process for selecting the characters you picked?

It was sort of a combination of a lot of different systems. First and foremost we listened to the fans. The idea for this game has existed long before Sony Santa Monica and Superbot got around to making it. There’s a wealth of information out there regarding what fans want to see and what characters they want to see—and what matchups they’d like to see. So we made sure to try and get as many of those as possible, but also, at the same time we’re Sony fans. We’re fighting game fans. There’s definitely characters that we wanted to see that we made sure were included, perhaps some lesser known characters that haven’t been around for a while. It runs the gamut.

The settings are all taken from well-known Sony games. How did you decide on the levels?

The level selection undergoes the same process. There are certain IPs like Patapon that really make a lot of sense as interaction that happens in the level, so you’ll see the Patapon army invading Hades. That just seems to fit the character and the spirit of that game really well, so we capitalized on that opportunity by presenting Patapon in that way in the game.

Were there any characters that you really wanted to get but for whatever reason–licensing maybe–you couldn’t get?

So far so good. I think everyone understands just how important this is to the fans, and everyone wants to meet their expectations. These IP holders—we worked very, very closely with all of these guys, and they are all involved in the selection process…we’re trying our hardest! The developers get it, and hopefully the fans appreciate it.

So once you have a character, what’s the process to adapt them to a fighting game like this?

First and foremost, the most important thing is getting the essence of the characters right. People are going to come to this game presumably because they love these characters. You’ve got this expectation of who Kratos is and what he can do, and we want to make sure we hit that. Then at the same time we have to translate it into the PlayStation All-Stars gameplay type. We’re making a 2D, four-player fighting game that’s not exactly the world that a lot of these characters come from. So there’s some dark arts in translating that experience, but it really starts to make sense once you identify the system, the moves, and the controls.

Can we expect anything major from you guys at E3?

Oh yeah. Stay tuned. We’re going to be announcing characters and environments and all that from now until the game comes out. I think E3 will be really informative for people with questions about our roster.

Once the game is released, are there any plans to do interactive things with the community, like maybe tournaments?

Oh yeah, absolutely. It’s built into the game. Community is super important for us. You will definitely see Superbot and Sony interfacing with the community through PlayStation All-Stars.

What’s your favorite part of the game so far?

I’ve had a really fun time talking about it. We’ve had to not talk about the game for so long. It’s a big relief to now be able to talk about it, share it with fans, just get this out there because we are super excited.

Any chance that we might see this on Vita?