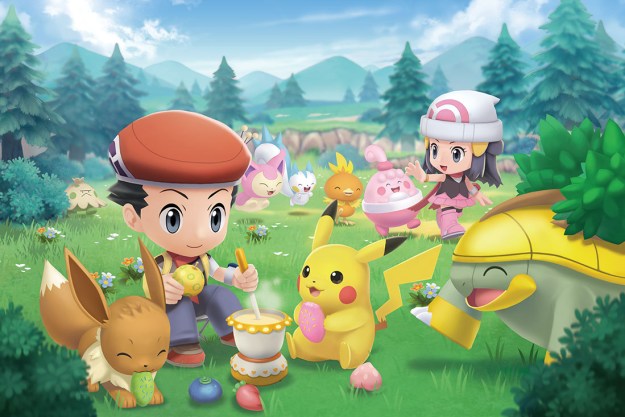 Pokémon Brilliant Diamond and Shining Pearl are the exact games fans wanted — and they still won’t be happy about it. The notoriously hard-to-please fan base spent years begging for a remake of Nintendo DS classics Pokémon Diamond and Pearl, but went into nitpick mode the moment they were actually announced. While the Switch remakes stay true to the originals, internet discourse will no doubt be fused with anger over missing features or “cut corners.”

The conversation around the game will sound much different if you have kids, though. Budding trainers adventuring into the Sinnoh region for the first time won’t know or care if some beloved feature has been tweaked. They’ll be too busy catching an army of monsters and fighting their way to the Elite Four. The magic is still here, so long as you leave decades of baggage at the door.

Nintendo plays it safe with Pokémon Brilliant Diamond and Shining Pearl, serving up a pair of remakes that are faithful almost to a fault. A straightforward adventure makes them perfect for kids, but older players may find themselves bored by a familiar structure and a lack of challenge. Thankfully, a strong endgame and the smartly redesigned Grand Underground make the return to Sinnoh worthwhile.

Despite playing and enjoying the original Diamond and Pearl when they first launched in 2006, I couldn’t remember much about them going into the remakes. I immediately realized why: They were paint-by-numbers Pokémon.

Within a few hours, I’m reliving beats that I feel like I’ve played through a dozen times. In my first gym, I’m using water attacks to beat Geodudes and Onixes. Inevitably, I have to fight a fisherman with a team of six Magikarps (Pokémon’s favorite punchline). Later, I’m infiltrating a shady company’s headquarters by stepping on teleportation pads. While every other mainline Pokémon game has a defining feature (good or bad) that makes it stand out, Diamond and Pearl were simply consistent. They doubled down on what people loved about the original games and spruced the formula up with the Nintendo DS’ power.

Perhaps that’s why people remember the classics so fondly, but it’s a little overly familiar in 2021. Pokémon Brilliant Diamond and Shining Pearl are careful not to change too much about the originals, which will come as a relief to those who just want a nostalgia trip that preserves their childhood in amber. But as someone with no real attachment, I often found myself playing on autopilot. A cave full of Zubats and Geodudes? Check. A Safari Zone-esque area where I can bait and catch monsters? Check. It’s as if developer ICLA is following a strict rulebook.

It doesn’t help that the remakes are absurdly easy. The first time I blacked out was in the Elite Four. My Pokémon were consistently 10 to 15 levels above any of my opponents’ monsters, and I could take down most of them in one shot. That was without any grinding. Any time it seemed like I could be in danger, the game’s friendship mechanic bailed me out like a deus ex machina. Pokémon can dodge unavoidable attacks, cure their own status ailments, or hang on with one health point if their friendship is high enough. For much of the game, I couldn’t lose if I wanted to.

The remakes are the best choice for kids who want to graduate from liking Pokémon as a cute cartoon to actually playing the games.

It’s clear who the intended audience is here: Kids. Every quality of life change removes any friction a young player may have — and I don’t think that’s a bad call. The remakes are the best choice for kids who want to graduate from liking Pokémon as a cute cartoon to actually playing the games. The straightforward story and lack of challenge serve as a perfect introduction to the series, all without totally dumbing down mechanics like in Let’s Go Pikachu and Eevee. Those who yearn for a more competitive experience built for adults might need to face the facts: The mainline series isn’t going to grow up with them.

While the core structure of the remakes is largely untouched, there are some key changes to its side activities. The biggest difference here is a totally reimagined version of the Underground, dubbed the Grand Underground. In the original games, this was a place where players could mine for treasure in a delightful touchscreen minigame and build secret bases. That’s all mostly intact here (there are some missing collectibles, which will ruffle some feathers) and as addictive as ever, even without a stylus.

ICLA has made impactful changes where they matter most, especially in the Grand Underground.

More importantly, players can now catch creatures in the Grand Underground. It’s essentially been transformed into a giant dungeon crawler full of type-themed rooms and freely wandering Pokémon. As soon as I got access to the area, I was able to pop down and add non-Sinnoh monsters like Absol to my team. Most of my final party came from hours spent exploring the underground, which makes up for the fact that Sinnoh’s normal Pokémon roster is pretty weak. Didn’t start with Chimchar? Ponyta would be your only other fire option if it weren’t for the Grand Underground.

This updated feature is just one of many that give Brilliant Diamond and Shining Pearl an impressive endgame beyond the main story. I really enjoyed hunting for fossils and statues (that can be used to decorate secret bases) as a different kind of post-game collection. There are more legendaries to catch after the Elite Four thanks to the new Ramanas Park area. Stickers are also a cute collectible, letting players create little effects when they release a creature from its Pokéball.

Not every feature has gotten an upgrade here. Super Pokémon Contests are a weak point, as they’ve been reduced to a boring, one-button rhythm game. Other DS-centric features also don’t translate very well here. Pokétch returns, giving players a handful of cute apps like a clock, but they feel out of place without the DS’ second screen. Players can also choose partner Pokémon that follow them around, but it’s a low-effort implementation compared to the Pokémon Let’s Go games, which included more playful interactions and a better sense of monster scale.

There are likely some other missing nuances that die-hard fans will lament over. Not every aspect from the original games has gotten the same level of shine here. Even so, ICLA has made impactful changes where they matter most, especially in the Grand Underground. There’s plenty of reasons for players to come back after the credits, and I can’t say the same for a lot of recent installments.

Faithful to a fault

The remake’s most polarizing design decision is its approach to aesthetics. Rather than giving Diamond and Pearl the full Sword and Shield treatment, ICLA chose a “Chibi” art style here. The cute and colorful graphics won’t be for everyone, but the choice makes sense. It modernizes the DS’ games visuals, but stays faithful to its top-down sprite work. It essentially looks the way fans imagined it did in 2006 — and that’s what a good remake does.

That’s a blessing and a curse, though. The visuals preserve the sense of nostalgia and help it avoid some of the “corner-cutting” discourse that plagued Sword and Shield’s launch, but it comes with some downsides. The world itself especially suffers as it feels beholden to the original visuals. It feels like every location was assembled using a Super Mario Maker-esque asset tool that lets developers drop trees and buildings on a grid. That leaves the whole visual experience feeling a little flat and devoid of personality.

The music fares better, which is a testament to how excellent the original soundtracks are. Classic themes are remixed with surprising rhythmic ticks that subverted my expectations way more than the gameplay did. I imagine the music will be what sticks with me this time around more than the towns or gyms.

It feels like every location was assembled using a Super Mario Maker-esque asset tool that lets developers drop trees and buildings on a grid.

It’s so true to the original that I found myself wondering if it needed to exist at all. Couldn’t Nintendo have just ported the Nintendo DS games to Switch and sold it on the eShop for $20? In this specific case, the answer is no. The DS’ two-screen experience puts a lot of classic games in a weird position. We’ll likely never see the concept mirrored again unless Nintendo starts integrating smartphone controller support into its consoles. So the remakes are a necessity, in a sense.

Perhaps that’s why Brilliant Diamond and Shining Pearl play it so safe. They aren’t trying to disrupt the original template too much, because they’re essentially replacing it. This release doubles as a preservation project, whether that’s the intent or not. I would love to play a remake that totally reimagines Sinnoh and shakes up the formula, but that wouldn’t be Pokémon Diamond and Pearl. These games more closely resemble my experience playing those games in 2006, and that brings all the highs and lows along for the ride.

Pokémon Brilliant Diamond and Shining Pearl are perfectly charming remakes, even if they aren’t the most memorable adventures. Smart tweaks to the Grand Underground help to fill in some of the original games’ flaws, though other features like Super Pokémon Contests have been overly simplified. A lack of difficulty and a cute, but polarizing art style indicate that these remakes are more aimed at kids than adults, which won’t go over well with some already irritable fans. But if you’re looking to introduce your kids to the magic of Pokémon, this is as straightforward an entry point as any.

Pokémon Sword and Shield take more creative swings at the formula, even if they don’t always land.

The main game can be completed in 20 to 30 hours thanks to quality of life changes, but there’s a lot to do here. The Grand Underground will especially pad some playtime.

Yes, but keep your expectations in check. This is a cute, easy Pokémon game that’s best for kids, not for adults who want a hardcore, competitive game.