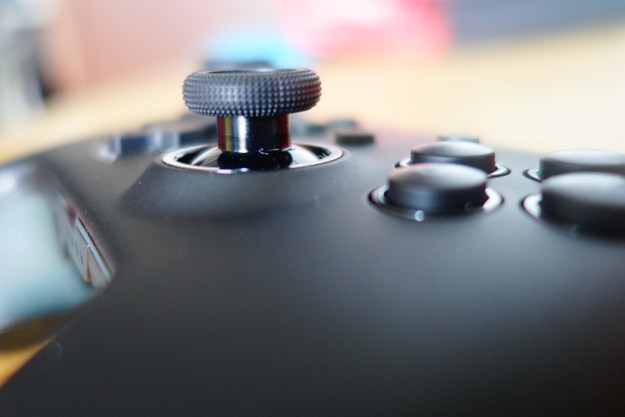 “The PowerA Fusion is a solid third-party option as long as you're comfortable trading key features for customization.”

The PowerA Fusion might just be the closest we get to having an Xbox Elite Series 2 equivalent for the Nintendo Switch. The third-party controller is loaded with bells and whistles that make it feel like a forward-thinking redesign of the best Nintendo Switch controllers.

Considering that Nintendo often moves sideways rather than forwards with tech, there’s a lot to get excited about here. The PowerA Fusion comes with mappable back paddles, swappable joysticks, and other customization options that have never been possible on an officially licensed Nintendo controller. Though when it comes to third-party gear, there’s always a level of compromise. Some missing fundamental features add a level of give-and-take that players will need to weigh before making a pricey commitment.

The PowerA Fusion retails for $100, which makes it more expensive than a standard Switch Pro controller. When looking at the full package, it’s easy to see why. The box doesn’t just include a wireless controller. There’s a back paddle pack, four thumbsticks, two swappable faceplates, and more — all housed within a handy carrying case.

Considering that the official Pro Controller retails for $70 without any of that justifies the extra $30.The closest parallel to the PowerA Fusion is the $180 Xbox Elite Series 2, which is a similarly rich package. They aren’t exact comparisons considering that the Elite Series 2 is much more technologically advanced, but it’s the closest we’ve seen when it comes to Switch technology.

The controller itself (without the back paddles installed) is perfectly comfortable and doesn’t feel terribly different from a standard Pro controller. Some of its buttons protrude out a little more and the grips feel a touch thick, but it doesn’t have the knockoff design of the third-party pads we grew up with.

Removing and replacing parts is a snap, literally. The magnetic faceplates pop right off and the thumbsticks are easy to swap. There’s even some flexibility with the paddle pack. Each paddle can be easily replaced, and the pack itself can be popped out at any time if its getting in the way. Just looking at the Fusion from a customization standpoint, all of its moving parts are intuitive and easy to handle. It’s hard to imagine Nintendo making something with the same kind of utility in the Switch’s lifetime.

The joy of back buttons

The back paddles are the main attraction here. When the pro pack is attached, the controller gets four metal paddles that sit between the grips. Buttons can be easily mapped to each paddle with just three quick inputs.

There are some limits to the mapping. Button combinations can’t be assigned to one paddle. I was also hoping to map the right stick’s cardinal directions to the paddles to control Tetris 99’s targeting system, but no dice. The more likely use is that players will map the four main face buttons to the back so that they never have to remove their thumb from the right stick.

Even with their limits, the paddles can be incredibly useful. While I couldn’t map my targeting in Tetris 99, I could assign my rotate buttons to them. It’s a simple change, but it meant that I never had to swap between target and rotate, which could have risked a misfire when dropping pieces in the fast-paced late game. When testing with New Pokemon Snap, I mapped each paddle to one of the face buttons, which added more fluidity to taking photos. I never lost full control of the camera and could scan or throw fruit without moving a finger.

I found that my hands felt a little cramped at times trying to position my fingers around the thick controller. I wouldn’t call it uncomfortable by a long shot, but it did require a less natural grip. One nice perk here is that the paddle pack is entirely removable and the slot it pops into can be closed up when it’s out. Anyone who feels like it’s getting in the way can just remove it.

Even with their limits, the paddles can be incredibly useful.

I did experience an issue with the two left paddles always mapping to the same button. PowerA says that’s likely due to a defective model. Given that others didn’t have that problem, that does seem to be the case. However, it does serve as a reminder of a risk you run with third-party gaming tech; it’s harder to assure consistentcy versus a first-party product from a company like Microsoft. Though considering Nintendo’s own, official controllers are notoriously defective (spurring Joy-Con drift lawsuits), the PowerA isn’t really unreliable by comparison.

All of those shiny features may sound too good to be true — and they are, to an extent. While the Fusion features all sorts of customization that Switch players have only dreamed of, it’s also missing some fundamentals.

There’s give-and-take here as players will be sacrificing some basics for customization potential.

The most glaring problem is that the controller features no rumble. I don’t mean that it’s lacking the Joy-Cons’ HD rumble; it doesn’t shake at all. Even with all the exciting extras, that might be a deal breaker for some. It’s also missing the amiibo reader functionality, which is present in a normal Pro controller. That’s much less of a problem considering that Amiibo support has always been niche, but dedicated fans may be a little put off by its absence here.

The battery life is a step down, too. While the Pro controller can last up to 40 hours, the Fusion taps out at around 20.

That’s where the $100 price point becomes more of a debate. It’s not like PowerA is offering all the functions of a Pro controller with a lot of extras. There’s give-and-take here as players will be sacrificing some basics for customization potential. Whether or not it’s worth it ultimately comes down to what a player values in a Switch controller. Those who just want something closer to an Xbox controller can stick with the Pro controller.

If the priority is customization, there’s no comparison, because Nintendo offers next to nothing in that department. It can also be plugged in, which is a step up from some of PowerA’s usual AA-powered wireless Switch pads.

The PowerA Fusion is a robust Nintendo Switch Pro controller alternative for players who want, well, more control. The back paddles, swappable faceplates, and removable joysticks all make this feel like a worthwhile investment. If the PowerA had rumble functionality and Amiibo support, it’d be an easy upgrade. Those omissions make the $100 price tag feel a little steep for anyone who simply wants a better version of the Pro controller, rather than an impressive, alternate one.

The official Nintendo Switch Pro controller is sturdier and less expensive, though the Fusion is uncontested when it comes to its customization.

The battery lasts up to 20 hours, which is half of what the official Pro controller offers. Compared to other third-party controllers, it feels sturdier than usua, even with some plasticy buttons.

Yes. If you’re specifically looking for more in-depth customization for Switch controls, the Fusion is a pretty robust package. Otherwise, stick with the Pro.

Topics
Every video game delay that has happened in 2023 so far
The best capture cards for 2023: Xbox, PlayStation, and PC
The best PSVR games for 2023
The Elder Scrolls Online’s 2023 updates bring players back to Morrowind
WWE 2K23: release date, editions, pre-order, and more
Despite divisive dialogue, Forspoken gets a lot right about open-world games
The best RPGs for the Nintendo Switch
How to link your Fire Emblem Engage and Fire Emblem Heroes account
Xbox and Bethesda’s Developer_Direct: how to watch and what to expect
Goldeneye 007 comes to Game Pass and Nintendo Switch later this week
The best iPhone games in 2023: 31 games you need to play right now
I can’t believe I’m recommending Forspoken on PS5 over PC
Redfall’s May 2 release date revealed during Developer_Direct