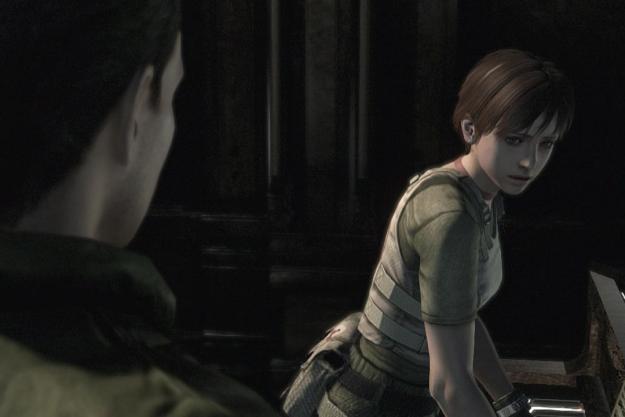 First, you take the humble Rubik’s Cube. Then you turn the age-old puzzle’s simple genius into a 1950s B-movie. That’s how you get the original Resident Evil.

Like the cube, Shinji Mikami’s signature horror game is an evolving physical puzzle with a vexing solution. Rather than colored blocks jumbled out of order and needing to be straightened out, the puzzle’s a giant American mansion with a secret, mad scientist laboratory sitting beneath it. The flair’s different. Instead of primary-colored blocks, Resident Evil is colored with every haunted house fixture in the book.

Like Rubik’s Cube, Resident Evil is an evolving physical puzzle with a vexing solution.

Man-eating beasts! Zombies! Killer plants and spiders and giant snakes! A Frankenstein’s monster, a mutated freak, and everywhere you look a new series of statues and paintings and frescoes that seem to follow your every move. Moldering bathrooms, nighttime graveyards, and dim labs. Every few feet, a locked door behind which is a new key to another locked door. And now it’s all in high-def.

This new HD re-mastering of the 2002 Gamecube version of Resident Evil is the best way to enjoy Mikami’s puzzling horror in 2015 thanks to an admirable presentation and smartly reconsidered controls.

The set up, for any newcomers looking to finally infiltrate this crowded series: You choose to play as either Jill Valentine or Chris Redfield, members Raccoon City’s elite STARS squad, and head out into the Arklay Mountains to look into reports of people disappearing under spooky circumstances. When some rotting zombie dogs attack, you run into a mansion squirreled away in the woods and then everything goes right to hell.

The mansion? Full of zombies, various other monsters, locked doors, and abundant traps that a Scooby Doo villain would applaud. Deep within its most secret halls lies a conspiracy to test biological weapons on unsuspecting citizens. Think of Disney’s Haunted House as conceived by a sadist collaborating with Ed Wood.

Beneath the widescreen, 1080p facelift in this remaster, Resident Evil is the same game as it was on the GameCube, and it’s beautiful. While modern high-end games can largely replicate and even surpass the visual quality of Evil’s scenery, its pre-rendered backgrounds hold up beautifully under the harsh light of high definition graphics.

Each room in Resident Evil feels sculpted with harsh shadows and light. Some of its most impressive scenes — like a forest path at night and a skewed, green hallway — are illusions, structures that could be rendered in real time on a contemporary gaming machine. Here, they create a wonderfully skewed atmosphere, as though you’re walking through a series of nightmare paintings. Which is, in a way, exactly what you’re doing.

(A note for the graphics obsessed: while it does look great in widescreen, playing in the original 4:3 does actually look a touch better.)

If you’re only familiar with the 1996 Resident Evil, this is a very different, significantly longer and more challenging beast. The central pleasure is the same. Most of the time you’re just trying to move into new spaces. The main hall of the mansion only has a handful of unlocked doors, so you move to find keys behind those doors. Instead, you find a book of sheet music, so then it’s off to find an instrument to match the tunes.

Meanwhile you only have a limited inventory — Jill can carry eight items and Chris can haul around six — so you may have to drop off those ink ribbons you need to save your game at typewriters. The whole time, some freak is waiting in the dark to start gnawing on your parts. Figuring out not just where you have to go, but what’s the most efficient way to get there with everything you need, remains a delicious problem in Resident Evil. There’s a distinct “eureka!” moment that comes out of cracking into a locked room with enough ammunition and healing herbs in-hand to kill the enormous, fire-red zombie waiting there.

Speaking of those red freaks: Resident Evil 2002 was viciously difficult. Mountain Climbing, the standard difficulty offered at the beginning of the game, had more enemies causing more damage and far fewer survival goods. Plus, it brought back downed enemies more frequently. (If Resident Evil zombies aren’t destroyed with fire, they reanimate as red, clawed berserkers that run instead of shamble. They are night terrors incarnate.)

The challenge was appreciated, but flawed. The easier difficulty left you flush with items and stripped away some of the gratification that came with success. Viciously unforgiving, it could also be tedious; when death is always one or two hits from an enemy away, you find yourself having to replay certain sections more often than you’d need to.

Resident Evil’s most significant change is likely going to be a divisive one with the faithful, but it’s also one of the best: No more tank controls.

Past versions of the game used a control scheme that was well suited to static backgrounds, with Jill and Chris operating much like human incarnations of a tank. Under the old scheme, pressing up or down moved your character forward or backward while left and right rotated the direction they were facing. The 2002 remake added a quick turn around maneuver but even that takes an extra beat, leaving you vulnerable to beasties.

Stilted as it was, the cumbersome movement added to the tension while it also helped with navigating the scenery, which would regularly switch perspective when moving between the static scenes. If Jill stepped into the background of the library but the camera shifted to her front when she got there, it was useful to know that always pressing up would keep her going in the right direction. When a leaping frog man with claws for arms chases you down the hall, it also makes you play like an uncoordinated freak.

Purists contend that this stiff interface is an essential part of the game, and for some that’s assuredly true. Like Rubik’s Cube fans that like to solve it blindfolded, extra challenge is part of the appeal. The old control scheme is here, but Capcom added in true three-dimensional movement — whichever direction you press on the controller, you walk that way — and it has a dramatic impact on the game.

The ability to turn in an instant makes avoiding zombified chompers demonstrably more manageable, but by no means a cake walk. Especially in the end, facing off against the game’s big boss, it’s still easy to get caught. On the whole, though, your increased speed and maneuverability takes out much of the tedium on the still-difficult normal setting.

The new controls aren’t perfect, though. Since the game still uses fixed perspectives, it can sometimes get confused when a scene shifts, and you may accidentally turn around at a crucial moment. It also makes the easier difficulties even easier. Even when survival isn’t a backbreaking task, though, there’s still joy to be found in solving this Rubik-ian world.

First, Resident Evil is one of video gaming’s most pleasurable puzzles, the unfolding of which requires patience and nerves. Second, it’s a work of horror, because something’s always trying to eat you while you’re trying to solve the puzzle and you never have enough stuff to stop the eating from happening. Suiting both fanatics and newcomers alike, this fresh HD remaster is the best version of that puzzle we’ve yet seen.

This game was reviewed on a PlayStation 4 using a code provided by Capcom.

Resident Evil 4 remake is coming to PS4, but seemingly not Xbox One
The best gaming speakers for 2022: Improve the sound on your PC or game console
Alone in the Dark: release date, trailers, gameplay, and more
The best Android games available right now (September 2022)
Xbox September update introduces game library revamp and more
2K warns users to beef up cyber security after support team gets hacked
Star Ocean: The Divine Force release date, trailers, gameplay, and more
The best Warzone landing spots for all maps during Season 5
How to pre-order Assassin’s Creed Mirage: retailers, editions, and bonuses
‘Wordle’ today, September 22: Answer, hints, and help for word of the day (#460)
Sega is putting all of its chips on the table with Sonic Frontiers
The best gaming tablets for 2022
Fortnite Chapter 3 guide: All week 1 quests and how to complete them