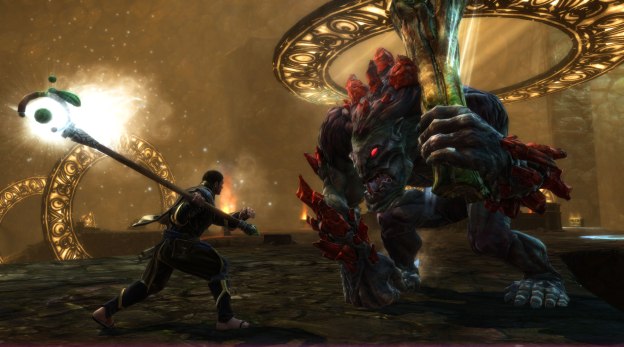 Members of Rhode Island Governor Lincoln Chafee’s administration are reportedly investigating what would happen if it chose to not pay back its $112.6 million debt for Curt Schilling’s failed 38 Studios, according to the Providence Journal.

The Rhode Island government initially offered 38 Studios a $75 million loan, to encourage Schilling to open the Kingdoms of Amalur: Reckoning developer in Providence, and maintain a staff of at least 450 in the state. Despite the moderate success Amalur, 38 Studios was soon in over its head. The developer wasn’t able to keep 450 employees on staff, and the government soon stepped in to go through the company’s financials. What they found was a studio that had been badly manged, with money being misspent. Schilling himself used $4 million of the loan to repay his own investment in the company. The state also claims that Schilling accepted the loan knowing he would fall at least $20 million short of the amount he actually needed, dooming 38 Studios to failure from the start and legally defrauding Rhode Island.

The state soon oversaw the closure of the studio in May of 2012. Schilling laid much of the blame on Chafee himself over “devastating” remarks about the studio’s health, and claimed 38 Studios’ closure would personally cost him $50 million.

In an attempt to recoup some of the losses, the state recently announced that it would attempt to auction off the Amalur property, which includes the rights to the single game released, the proposed MMO Copernicus that was to be set in the same universe, any other original ideas based around it. That should help a bit, but it certainly won’t come close to the $112.6 million the state is out.

As it stands, Chafee’s plan is to pay back the initial $75 million loan, as well as the $37.6 million in interest in installments over the next ten years. But while Chafee has claimed the state has a “moral obligation” to repay this debt, the state is not legally obligated to do so.

The consequences of not repaying the loan would be complicated and aren’t completely clear yet, but Chafee and his administration are currently looking in to the ramifications. Chafee spokeswoman Christine Hunsinger said that the administration has been examining the possibility for several months.

Rhode Island establishes plan to repay 38 Studios’ loan debts
38 Studios debt to be paid in blood; Curt Schilling auctions 2004 World Series sock
With 38 Studios’ goods for sale, who will make Kingdoms of Amalur 2?
38 Studios’ IP Kingdoms of Amalur up for auction. Will EA or Epic buy?
GameStop Cyber Monday Deal: Buy 2 Get 1 on all preowned Xbox One and PS4 games
Starship Troopers: Extermination turns sci-fi satire into a co-op shooter
Score $90 off an Alienware gaming chair for Cyber Monday
How to get Battle Tokens in Warzone 2.0
How to redeem Mystery Gifts in Pokémon Scarlet and Violet
Call of Duty: Warzone 2.0 desperately needs to give players more health
Don’t miss this Xbox Series S Cyber Monday deal — ends midnight
Now’s the perfect time to stock up on PS5 controllers
How to evolve Tandemaus into Maushold in Pokémon Scarlet and Violet