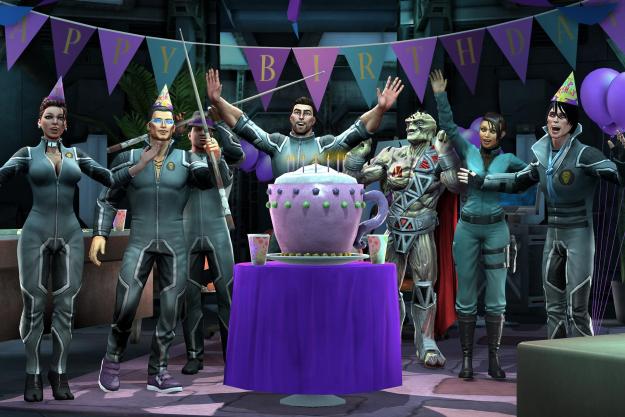 “The Saints go straight to hell, both literally and metaphorically, in Saints Row IV standalone expansion, Gat Out of Hell.”

Never, ever forget the law of Boba Fett: Just because you have a badass in your story, that doesn’t mean they’re pumped and primed for the spotlight. Boba Fett isn’t awesome because he disintegrates people on screen all the time; he’s badass because he has to be told not to do that. We see just enough of him.

Saints Row: Gat Out of Hell breaks the Boba Fett law, passing the protagonist reins to series badass Johnny Gat, and in the process breaks the series’ streak of brilliant outings. Gat Out of Hell’s shift in character focus and overall mediocrity makes for a deeply disappointing follow up to Saints Row IV.

Taken on his own, Gat just feels like an empty caricature. Less Boba Fett and more Duke Nukem.

It starts off well enough. Having brutalized a horde of aliens and rescued what remains of humanity, the gangland President of the United States, best friend Johnny Gat, and the rest of the Saints are relaxing in their spaceship and toasting hacker extraordinaire Kinzie Kensington’s birthday. The festivities are interrupted when the POTUS gets sucked into Hell by a Ouija Board, clearly on loan from some ’60s junior high bash. Johnny and Kinzie, real go-getters for sociopathic thugs, head into the netherworld and make a deal with a former rival, raising demonic coalition to take on Satan himself and save their leader.

How else are you going to follow up destroying the Earth and stopping an alien invasion, other than heading into the afterlife? There’s even a ficton-appropriate twist on the existing super powers from Saints IV. Rather than being able to jump, glide, and run at super fast speeds, Kinzie and Gat are gifted with Lucifer’s wings, which they use to fly about the burnt out tenements, lava flows, and decaying, zombie-filled residential areas of Hell. Flying, pumping Lucifer’s wings, gliding around, and collecting lost souls in the open world to expand your fallen angelic-skills feels different but just as awesome as moving through the previous game’s Steelport.

Sadly, Gat Out of Hell starts to come apart after that promising opening salvo. Johnny Gat himself is the biggest problem. He’s perfectly suited as a supporting heavy in the numbered Saints games. His constant one-liners and quips about murder and messing people up make him come off like an insane cross between Patrick Bateman from American Psycho, a background character from Big Trouble in Little China, and the Fonz, which is perfect in the doses you get of him in the other games.

Taken on his own, Gat just feels like an empty caricature. Less Boba Fett and more Duke Nukem. His quips become tiresome and the invulnerability routine gets a hole punched through it the first time some flying magic hellspawn kills you in the middle of the mission. It doesn’t help matters that part of Saints Row’s appeal is making your own character and then inhabiting them in an inherently ridiculous place. Gat is already defined, thinly at that, so it’s hard to feel connected to him at all.

Further exacerbating matters is Gat Out of Hell’s presentation, from the landscape of hell to the way it tells its story. Steelport wasn’t a bastion of visual diversity, but the varied and deeply weird story missions in Saints Row IV made trips to and from its open world a treat. The grey, orange, brown, and darker brown washes of Hell wear on the eye when you’re just wandering around but become problematic when you can’t see the similarly colored demons attacking you at random.

Meanwhile, the hilarious voiced scenes and dialogue that made Saints IV so funny are replaced here by static storybook pages backed by bland narration. They sum up all the action between missions, feeling more like a Wikipedia summary rather than a proper story. The power players of Hell that you recruit, like William Shakespeare, Blackbeard the pirate, and Vlad the Impaler, scarcely interact with Gat at all, their background relegated to collectible audio logs dotted around Hell. Even then, these characters aren’t nearly as dynamic or funny as those in Saints Row IV. Bill Shakespeare is no Keith David.

Rather than plumb Kinzie’s depths, Gat Out of Hell barely acknowledges her.

While Hell is a new environment with a fair amount of optional quests, the campaign of this standalone expansion doesn’t have a lot to it. By the time you’ve recruited your four hellish allies and unlocked the game’s variations on IV’s combat powers — you can summon imps rather than use telekinesis, etc. — the story is nearly half done, and barely an hour has passed. Hell’s exclusive activities, like paddling damned frat boys, are amusing spins on older sidequests, but they’re hardly revelations.

Gat Out of Hell’s greatest sin, however, is how it wastes the opportunity to give the spotlight to a supporting character that actually deserves it. Flying around and wasting time in Gat’s hell is dumb fun even if its story isn’t, and the best part is that you can play as Kinzie Kensington. She’s more mysterious than Johnny Gat, even her big role in the previous game. Why the hell does she put up with the Saints when she seems so exasperated by them? If she’s just a sociopath, why does she continue to help out?

Rather than plumb Kinzie’s depths, Gat Out of Hell barely acknowledges her. Even if you play as her the whole game (you can play as either character), those narrated storybook scenes never acknowledge anyone but Gat doing anything. Little 5- to 10-second monologues that ponder the workings of Hell’s technology can be found when you explore as Kinzie, but even these flourishes don’t sound like the volatile weirdo from Saints Row IV.

The wings? Pretty cool. Flying on those wings? Very cool. Everything else in Gat Out of Hell, unfortunately, is as shallow and drab as its star. It’s Johnny Gat’s own, personal Sarlacc Pit.

This game was reviewed on a PlayStation 4 using a code provided by Deep Silver.

Everything can be customized in the new Saints Row game