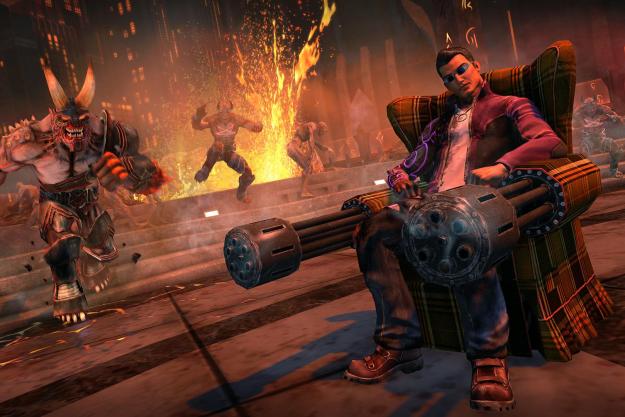 “Saints Row IV is a farce about gangs running government and alien invasions, but its also a smart, ridiculously fun statement on one game developer’s journey.”

Saints Row IV gets right the very first thing a video game needs to do well: Movement. Open world games like the Saints series especially need to have navigation that feels good in order to thrive, otherwise the constant back and forth over its territory gets old fast. And damn it feels good to be the gangster President of the United States in this game.

In Steelport, a dark mirror of the city in Saints Row the Third, new super powers let you jump higher than rotting refineries and glide through the air like a belly flopping Buddha, floating between side missions where you telekinetically throw giant, evil anime cat heads through hoops for points or just blow up as much stuff as possible.

Damn it feels good to be the gangster President of the United States in this game.

It’s easy to lose yourself for long periods of time when jumping your way across the city. Leaping and gliding around while collecting blue balls of light on rooftops to level up your super powers never gets old. It’s often more fun than taking on the defined side missions sprinkled throughout the game, in truth.

That’s because developer Deep Silver Volition gets the raw sensation of fun just right. Sure, you can earn more experience points when you spend a few minutes completing race missions where you have to hit boosts and avoid fire obstacles while using your super sprint ability, but they’re hardly essential. It’s plenty fun to just bolt about on your own, listening to the bonkers licensed soundtrack as you go.

Volition knows enough to not stand in the way of how its players want to play. If you don’t want to do a hacking side mission to open up a shop or take control of an alien outpost — both fine diversions on their own — that’s okay. Go sprint into oncoming traffic, tossing cars aside like ragdolls, while blasting Montell Jordan’s “This Is How We Do It.” Your character still grows.

Character is the heart driving this body after all. How the hell did Saints Row go from a stock, mildly comedic riff on Grand Theft Auto 3’s guns and gangsters pastiche to a game where you can basically be 1930s Superman in a Puma track suit? After the gangs versus government conflict in the previous game, Saints IV opens with the stakes raised to an insane, almost nonsensical degree.

The Saints gang is now working with MI6 to bring down terrorists and a mission that almost sees the world destroyed instead ends with your own character made President. (Just roll with it. Aerosmith gets involved.) Shortly thereafter, while you’re governing the U.S. like a boss with actor Keith David as your VP and curing cancer (“f–k cancer,” the game playfully states), aliens invade looking to gobble up the most exceptional creatures on Earth.

Naturally, the Saints crew is taken and shoved into a Matrix-style simulation of their known world. When you escape with help from Kinzie Kensington, your volatile hacker gal Friday, arch-villain Zinyak blows up the planet and you move to rescue your crew from their own virtual reality prisons. If nothing else, the reassembled Saints can fight back and get revenge. Maybe, just maybe, they can even restore the planet.

Saints Row IV elevates itself about referential parody and farce like Family Guy by never succumbing to cynicism.

If that sounds like a ridiculously stock premise that would make even Michael Bay balk, that’s because it is — and Saints Row IV knows it. Every second of the game is thick with self-aware humor and knowing nods at how frankly stupid what’s happening actually is. The president, no matter how you customize him or her, is always a little bemused at what’s happening, even his own sociopathic tendencies to just destroy everything that gets in the way.

Sometimes the nods to the Saints Row’s inspirations are just explicit, in the best damn way, really. Aliens are running a virtual world and actor Keith David is there? That’s an awful lot like a certain classic John Carpenter movie, and for one brief moment the game just turns into that movie. It’s epic, in the way hyperbolic Internet forums tend to deploy that word. This is game made for that audience, after all.

Volition’s game elevates itself about referential parody and farce like Family Guy by never succumbing to cynicism. There’s no shame here, a total lack of apology for the things Saints sends its many shout outs too. It’s celebratory and joyful, gleefully anarchic. That spirit gives the game its true voice.

Much greater emphasis is put on the story than the open world in Saints Row IV, letting you just initiate campaign missions one after the other from the central menu. What’s more, the majority of those missions are devoted to getting the gang back together outside of the simulated Steelport – which is really just a sandbox here. The sense of discovery in Saints Row IV comes from rescuing each Saint from the personal hell that Earth’s invaders trapped them in.

Goth fop Matt Miller is stuck inside an old-school text adventure with a soundtrack by a bleeping riff of the Metroid theme song. Asha is consigned to a nightmare of Metal Gear Solid where you have to hide in a box rather than directly attack guards. Best friend and mentor Johnny Gat is stuck in a pixilated Streets of Rage brawler (Saints of Rage, naturally.) And Benjamin King, hilariously voiced by Terry Crews, is literally stuck back in Saints Row.

Hell is video games for these characters, and viewed a certain way, Volition is rescuing them in the same way the president is in the game. Nine years ago, these characters were consigned to a rote genre exercise, an attempt to serve an audience looking for HD Grand Theft Auto before such a thing existed.

There was, viewed through the lens of video games as a business, a degree of cynicism in making the original Saints Row. But Volition has stuck by its baby, slowly warping it into something wholly unique, something different than just the stock video game types of old. So it’s rescued these arguably beloved characters and brought them into a stranger, more wonderfully weird and funny world. Video games don’t have to be hell for them.

The rescue mission is a success. In fact, the only time Saints Row IV stumbles is when it resorts to the most familiar video game activity there is: Shoot everything in sight with guns. Some inventive guns are certainly on hand, and this re-release on new consoles gives you more immediate access to some ridiculous ones like the all-in-one destroyer called ‘Merica, but gunning down enemies in simple shoot outs sometimes feels like a barrier between you and the good stuff.

Saints Row IV itself is Volition’s song of its people, and it’s sung proud, loud, and madly clear.

This game was reviewed on a PlayStation 4 using a disc provided by Deep Silver.

The best perks in Saints Row
Saints Row beginner’s guide: 10 tips and tricks
Diablo IV will have a season pass and cosmetic-only microtransactions
Saints Row: release date, trailers, gameplay, and more
Star Wars Jedi: Survivor release date pops up on Steam ahead of Game Awards
Marvel’s Midnight Suns: 6 tips and tricks to get started
Forget the haters, The Super Mario Bros. Movie actually looks awesome
Microsoft’s price hike on Xbox games will apply to PC, Steam
The best GPU benchmarking software
‘Wordle’ today, December 6: Answer, hints, and help for word of the day (#535)
Staff picks: Why Elden Ring is our 2022 game of the year
Why this year’s Game Awards has Geoff Keighley living in fear
Get this Lenovo gaming laptop with an RTX 3050 Ti for $550 today