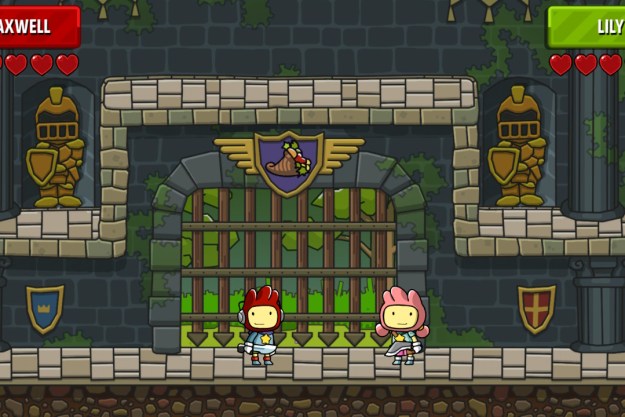 At first glance, Scribblenauts Showdown seems like a turn for the worse. Its new eponymous game mode, “showdown,” more or less abandons the create-anything mentality behind the series’ defining mechanic — the ability to type in a word or phrase and summon it into an interactive environment — for a collection of rapid-fire party games wrapped inside a card-based board game. Some of these micro-experiences incorporate the mechanic, but do so in a much more restrictive format.

Longtime fans might dismiss Showdown over its new structure, but that would be a mistake.

Developer Shiver Entertainment, taking over for series creator 5th Cell, puts a new spin on the ideas behind Scribblenauts, but definitely retains the series’ charm. The strategically engaging Showdown mode splices the competitive focus of Mario Party with the wacky, high-speed antics of WarioWare, to create a party game that feels as clever as it does frantic. Showdown is currently the closest you can get to the magic of old-school party games on PlayStation 4, Xbox One, and the Nintendo Switch.

Hop on (the) board

Each Showdown mode match takes place on a winding Candy Land-esque game board. You have the option for 15, 30, or 45-minute games: The greater the length, the more spaces there are on the board. As board tokens, each player can pick to control one of series most well-known figures, including Maxwell, Lily, Zeus, and Santa Claus. You can create your own Scribblenaut — Ours wears a wizard robe with a baby bib, a classy sailor hat, and has a kazoo dangling from his mouth.

At the start of the game, each player is dealt four cards. From there, it’s a basic, Milton Bradley-style gameplay loop: You take turns drawing, then playing your cards, triggering minigames to decide who gets to advance.

Longtime fans might dismiss Showdown over its new structure, but that would be a mistake.

The majority of the cards that pop into your hand list a specific party game. The games vary in style — some are word-based, and some are more general party games. Each card type also features an action — move forward three spaces, send your opponent back two spaces, draw two cards, steal a card from another player, etc. Whoever wins the game earns the card’s benefits.

Other cards instantly move you up or another player back a few spaces, no game required. These “instant” cards aren’t drawn excessively and can turn the tide of the game: Swapping hands with another player, for example, always makes for a good time.

Overall, the card-based system adds a bit of strategic depth that gives players more control over their own strengths and weaknesses in terms of mini games. Since Showdown is played with local multiplayer, you can see everyone else’s cards, so using your favorite cards quickly is a point of emphasis with the looming threat of steal and swap cards.

Generally speaking, Showdown’s repertoire of minigames, both “wordy” and “speedy,” features a wide array quick, fun hits. The wordy games implement the franchise’s object creation premise in subtle, but very clever ways. In “Getting Fishy!,” creating an object that fits the category, i.e. pumpkin bait in the Halloween category, proves to be more alluring to the fish than an object that doesn’t fit the category. In “Meal Munch!,” an eating contest, conjuring the smallest object that you can think of within the set category lowers the amount of time it takes to devour your meal.

While most of the 12 wordy games land, a few are blatant copies of popular mobile games. “Take Flight!” is literally a less infuriating Flappy Bird that advises you to build a fast object, even though it’s more beneficial to just input the smallest thing you can think of to avoid hitting walls and fire breathing dragons. Similarly, “Tower Topple!” is just a less polished version of Angry Birds. It’s disappointing that a retail game would glaringly reuse elements from free mobile games.

The 15 speedy games revolve around button-mashing (digging for treasure, inflating a balloon, breaking a piñata, tug of war), collecting items quickly, or completing carefully timed maneuvers such as smacking a tetherball back and forth. The games can take as little as 10 seconds, capturing the frantic pace of WarioWare. On the Nintendo Switch, specifically, many of the button mashing games, such as “Soda Spray!” — shaking a bottle until it explodes on your opponent — use Joy-Con motion controls instead of rapid tapping. In isolation, they aren’t going to blow your mind, but they provide a nice change of pace from the more nuanced wordy games.

All 27 minigames are pretty straightforward, requiring at most two different buttons and the thumbstick, but mostly a single button. Removed from the conceit of the board game, seasoned gamers may grow tired of the games — you can play the games on their own in Versus mode. Showdown was designed with the board game structure in mind, and for family game night or when you have friends over, the assortment of games more than does the trick.

Back to the sandbox

Showdown’s sandbox mode features eight self-contained levels to let your creative side run wild. You can make use of the full 35,000-word Scribblenauts dictionary across eight different environments.

Scribblenauts Showdown is definitely a departure from the series’ status quo.

In the absence of touchscreen controls, creating unique objects with an on-screen input system takes more time at first, but it doesn’t take long to get the hang of it thanks to an intuitive keyboard layout.

Each sandbox includes a small number of people, animals, and objects who have hopes and desires and dreams that you can fulfill by paying attention to their thought bubbles and creating objects for them. There are only 10 of these defined objectives in each level, so it isn’t so much a campaign or single-player mode, so much as a way to kickstart your creativity. Once you’re done with initial prompts, it’s up to you to make your own fun.

For those hoping for a robust, open experience similar to Scribblenauts Unlimited, you might be disappointed by these small areas. Showdown lets you make whatever your heart desires, but even in that feels limited: You can only fit so much in these small, self-contained levels before they start to feel overcrowded.

Part of the appeal of Scribblenauts has always been experimenting with objects and making your own fun with the world around you. Showdown features drop-in drop-out cooperative play in Sandbox mode — a new addition to the series. In Unlimited, a second player could take control of any object you’ve created but could not create their own objects.

With two players able to create anything that comes to mind, you can create your own games within the game (you have to follow the rules you agreed on though!). We played deathmatch with a friend on an ocean liner, applied hostile adjectives to dinosaurs to watch them fight, and handed each other as many whimsical objects as we could think of. The possibilities seem endless — save for creating custom objects which sadly isn’t present here — but you have smaller spaces to work with than before.

Scribblenauts Showdown is definitely a departure from the series’ status quo. Thankfully, its card-based board game offers a fresh and fun spin on the party game genre. The minigames are simplistic enough for the whole family to enjoy. They’re not all original, but they work within the framework of the board game. The stripped-down sandbox may be a disappoint longtime fans, but it’s an extra feature that adds to a game that would still feel complete without it.

Like all party games, Showdown is best when played in short spurts on family game nights, as you may grow tired of the minigames during long stretches. The sandbox mode objectives can be completed in a few hours, but if you get a kick out of making up your own rulesets, the breadth of your imagination will determine how long it engages you.

Yes. If you like party games, Scribblenauts Showdown is one of the best around.

Scribblenauts Showdown was reviewed on the Nintendo Switch using a retail code provided by the publisher.