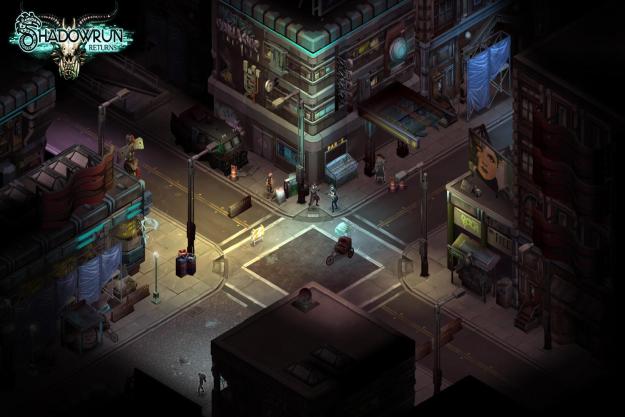 Elves and the Internet. Magic mixed with gunmetal. Trolls, dwarves, and other denizens of fantasy worlds go cyberpunk in a dystopian, Blade Runner-esque landscape. The allure of the Shadowrun pen-and-paper role-playing game has always been its unusual fusion of sci-fi and fantasy. It’s why 1993’s SNES classic continues to be so memorable. It’s why the disastrous multiplayer shooter that FASA Interactive built for Xbox 360 still has a few defenders. And it’s why we are fortunate to have the original RPG’s co-creator Jordan Weisman overseeing the work at Harebrained Schemes on the studio’s successfully Kickstarter-ed debut effort, Shadowrun Returns.

The first story in Shadowrun Returns follows a character of your own creation as s/he investigates the apparent murder of a former associate, Sam Watts. The specifics of that relationship are actually difficult to speak to, since they’re driven almost entirely by the dialogue choices that you make. Were you and the dead man close? Did you have a cantankerous relationship? Did you trust him? A flashback sequence that doubles as a combat tutorial lays out some relevant contextual details, but even there, the nature of your relationship is largely defined by your own dialogue choices.

Sam’s dead now, and he trusted you enough to wire up a dead man’s switch in his brain that sends a message to your inbox at the moment his heart stops. Your old pal has one request for you: find out who or what caused his untimely demise. Do so, and you’ll receive the full sum of his life insurance policy, worth 100,000 nuyen (Shadowrun‘s currency). So with hopes of leaving your squalid, day-to-day existence behind, you pack up and head to Seattle to look into what happened.

That’s the setup for “The Dead Man’s Switch,” the story that accompanies the release of Shadowrun Returns. Think of it like you would a standalone quest for a pen-and-paper RPG, the sort of thing that fans of such games typically refer to as “modules.” The software is designed to support many such modules; in truth, it’s more of a platform than a standalone game. If The Dead Man’s Switch is analogous with a standalone RPG quest, then Shadowrun Returns as a whole amounts to the core rulebook. Even without the included story, you’ve got all the tools you need to create your own, as we’ll discuss shortly.

The Dead Man’s Switch is a 10-15 hour adventure, and while there are a handful of diversions and sidequests to play around with as you progress, the story maintains a relatively tight focus on solving Sam’s murder. Combat comes and goes as situations demand, but this is much more a story-driven RPG than it is a tactical combat game. Care went into creating a believable set of characters, beings that you actually want to interact with and learn more about. There’s a lot of reading to be done, but it is well-written exposition and dialogue that only serves to create a deeper sense of investment.

The spirit of pen and paper

The lack of depth is felt most acutely in the way progression is handled. Each of the character classes in Shadowrun Returns feels distinct, with unique abilities that require differing approaches in how you play. You can choose from a preset class and build out from there or you can start with a clean character sheet and tailor your runner for multiple roles from the outset. While all of this would seem to speak to a flexible character progression, Dead Man’s Switch doesn’t allow for grinding out a power-player. There is a defined structure to the story and a limited amount of of Karma points (the skill upgrade currency) and equipment to be had.

Character creation sticks closely to the setup of the original RPG. You start by choosing a race – all with their own racial bonuses and penalties – and then fill out your character sheet from there. Leveling up a particular attribute or skill costs a number Karma points equal to the level you want to unlock. So pushing your Quickness attribute up from 4 to 5 would cost you five points, for example. It works the same for individual skills, save for the fact that each skill ties to an attribute, and that skill’s rating can’t climb higher than its related attribute. So if your Quickness – which governs firearm-related skills – is at 5, then you can’t level Shotgun up beyond that rating until you’ve boosted your Quickness.

These rules fall close to those of the original RPG, but the scope of what you’re unlocking is limited. Most of the skills relate to a specific ability – some meant specifically for combat, some fulfilling other purposes – but it’s not nearly as robust as the sort of branching upgrade tree that you typically see in this type of game. For example, Decker is a seemingly cool character class built around using the power of the Matrix (Shadowrun‘s Internet) to make awesome things happen, but in combat that amounts to little more than marking one enemy or another to improve your To Ht rating on them.

Same goes for equipment. The Dead Man’s Switch is structured with very specific breaks in mind, and all shops in the world re-populate with the next “level” of gear after each of these breaks. The joy of finding sweet loot and choosing between different-yet-similar pieces of equipment that most RPGs offer feels stunted here. Some may appreciate the streamlined design for keeping the action focused squarely on the story, but it would be nice to see future updates bring some more flexibility to character progression.

That said, there are other ways to experiment. Each character has a player-selected Etiquette that amounts to an aptitude for dealing with certain types of social situations. Do you want to be well-acquainted with the legal system and get cops to talk straight with you? Choose Security. Feel like you’re better suited to navigating Seattle’s back alleys and shadowy corners? Go with Street instead. The Etiquette that you choose unlocks additional dialogue options, as does  having attributes and skills at a certain rating. You can always see the options in each dialogue tree, even if they’re not available to you. Different types of characters breed different results within the story, reinforcing the value of playing Shadowrun Returns in the manner that you, personally, would prefer.

Combat feels similarly diverse. Turn-based encounters play out on the same isometric maps that you’re exploring in non-combat situations. Even without a wide range of skills to choose from for each class, there’s a lot of depth here. You can take cover, create fields of fire, and generally just shift your pieces around strategically to suit the changing conditions of a given battle. The progression depth problem comes up again in the sense that single class-focused characters generally have to stick with one strategy, but generally speaking, combat is both challenging and rewarding.

The only real complaint as far as the overall design goes relates to how your progress is recorded. There’s no “save anywhere” feature in Shadowrun Returns. It’s all checkpoint-based. You revisit certain locations repeatedly, but the story follows a linear path that sends you to each environment according to a script. The game autosaves each time you enter a new map, but it is entirely possible to spend a good chunk of time exploring and leveling up in a space, only to lose all of that progress when one fight turns against you. The lack of a “save anywhere” option is a frustrating oversight, and one that will hopefully be addressed in a future update.

It’s clear that there’s more to come from Shadowrun Returns. When you click into the game’s Content menu, The Dead Man’s Switch is accompanied by other packs, bearing labels like “Seattle Area Environments and Tilesets” and “Core Shadowrun Returns functionality.” These tie into the included Shadowrun Editor, a standalone app that is essentially a module-builder for fans to play around with. There’s no in-game tutorial teaching you how to use the software, but a help menu links directly to a handy Shadowrun Wiki that fills the same role.

Serious RPG-loving gamers may want for more depth, and rightly so, but this first story does a commendable job of exploring the breadth of what’s possible in Shadowrun Returns. Harebrained Schemes clearly built a framework here that will serve as a platform for future expansions, both from the studio and from the fan community. There’s no doubt that a community is out there, given the Kickstarter success, and an obvious respect for the source material is very much in evidence. Shadowrun Returns is a superb first step for a project that promises to grow into something much larger, realizing the classic pen-and-paper RPG in a way that serves longtime followers while delivering an exciting universe for newcomers to explore.

This game was reviewed on an Alienware X51 gaming PC and on a 2012 MacBook Air using a Steam code provided by Harebrained Schemes.

Topics
The best PS5 controllers for 2023
The best upcoming PC games: 2023 and beyond
The best upcoming PS5 games: 2023 and beyond
PS Plus adds Evil Dead, OlliOlli World, and more in February
How to charge a Nintendo Switch controller
Best gaming laptop deals: Save on Alienware, Asus and more
Best Alienware Deals: Save on gaming laptops, PCs and monitors
The best video games of January 2023: Hi-Fi Rush, Dead Space, and more
With Valiant Hearts: Coming Home, Netflix finds its video game voice
The best guns in Dead Space
The Crew Motorfest brings a racing festival to Hawaii this year
The best skills to inherit in Fire Emblem Engage
Dead Space: how to fix the centrifuge