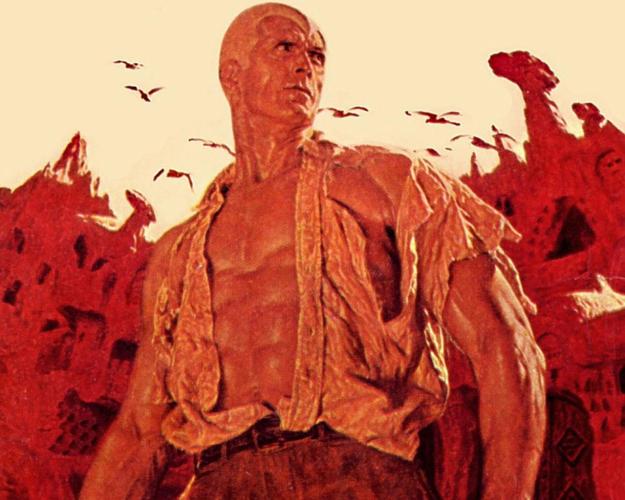 For years now, Shane Black has made no secret of his desire to make a Doc Savage film. Before being attached to co-write and direct Iron Man 3, he was looking at adapting the anime/manga series Death Note as well as bringing the 1930s pulp hero Doc Savage back to life. They were passion projects, but Black needed a bit more clout before he could bring them out of limbo.

Black basically has the keys to Hollywood and can make anything he wants now that he’s opened the second biggest debut of all time (behind The Avengers) in Iron Man 3. He has “heat,” as they say, and it appears that he has chosen to use that heat to bring Doc Savage to the big screen.

The name Doc Savage lost a lot of its prominence over the years, but there was a time when he was one of the preeminent superheros. In fact, Doc Savage was something of a proto-superhero, born during the era of pulp magazines in the 1930s, alongside the likes of The Shadow and Flash Gordon.

Unlike his contemporaries, Clark “Doc” Savage Jr. possessed no special powers or fantastic technology. He was just a man that was trained from birth to be a near perfect human, physically and mentally. He possessed the skills of a physician, surgeon, inventor, explorer, scientist, and Olympian level athlete. Using his considerable fortune, he sought out evil and the odd lost city from his headquarters in the Empire State Building. Doc Savage traveled the globe to right wrongs and the like. Think of him as a cross between Indiana Jones and Batman; in truth, he helped to inspire both of them.

Doc Savage debuted in 1933 in his own magazine, and a radio show followed in 1934. The character was created by Lester Dent, with help from Henry Ralston and John Nanovic. Doc Savage disappeared after 1949, but later enjoyed a mini-Renaissance when his stories were republished in 1964. This led to an unfortunate new look involving bronze skin and a widow’s peak, as well as a feature film in 1975 called Doc Savage: The Man of Bronze.

That film was… well, it wasn’t good. It walked the path of the campy Batman TV show, and it starred Ron Ely, who looked more like Rocky Horror than a superhero. The film presented a laughable take on the character.

Despite several attempts to bring Doc Savage back to life in both film and comics, the property has remained mostly silent (with the exception of the odd crossover series featuring The Shadow or Batman). Arnold Schwarzenegger was said to be eyeing it as a starring vehicle in 1999, but his run as the Governator derailed the franchise and left it in limbo for more than a decade now.

Since 2009, Black has been pushing to get a Doc Savage film made based on the screenplay that he wrote with Anthony Bagarozzi and Charles Mondry. Apparently, all it took was one measly record-shattering debut of $175.3 million in the U.S. and $680.1 million worldwide. Go figure.

Black is Hollywood’s favorite (and most profitable) director of the moment, and his options are endless. Of course he chose passion project Doc Savage as his next film. Yesterday, he officially closed a deal with Sony. Neal H. Moritz (Fast & Furious 6) is attached to produce. No production time frame has been announced yet and it is way too early to start talking about casting.

Still, the heat is on Black, and Hollywood loves to revive old properties, especially ones with franchise potential. Doc Savage is likely to end up on the fast track.

Topics
Marvel’s Guardians of the Galaxy puts a superhero spin on Mass Effect
Insomniac shows off ‘Spider-Verse’ suit coming to Spider-Man: Miles Morales
The best superhero games of all time
Everything we know about Marvel Ultimate Alliance 3: The Black Order
How to evolve Pawmo into Pawmot in Pokémon Scarlet and Violet
Live now: Save $50 on the Microsoft Xbox Series S Digital Edition deal
‘Wordle’ today, November 24: Answer, hints, and help for word of the day (#523)
7 video game characters who deserve a Macy’s Thanksgiving Day Parade balloon
The best multiplayer games on Nintendo Switch
The best PS5 headsets
The best Xbox Series X headsets
Save $250 on the Razer Iskur X XL gaming chair for Black Friday
This PS5 controller Black Friday deal drops the price by $20