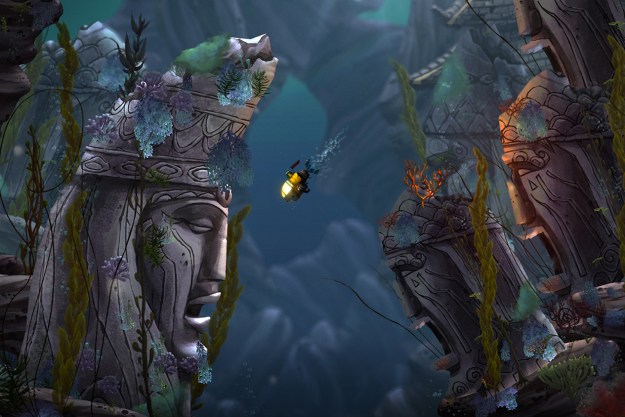 “Song of the Deep has too many bugs and design flaws to stay afloat.”

Song of the Deep is a game made to take advantage of the low flow of kid-friendly games. The new MetroidVania action game from Ratchet and Clank developer Insomniac Games (and GameStop’s new publishing division, GameTrust) tells a simple, kid-friendly story, yet it clearly hews to a much lower standard for originality and polish — one that wouldn’t be deemed acceptable in a more competitive market.

At its core, Song of the Deep is a pleasant if entirely rote game, but it’s bedeviled by bugs and small design snags. While technically finished, not a single aspect of this game feels completely thought through.

Once upon a time…

Song of the Deep is an interactive storybook: Its cutscenes feature colorful, hand-drawn-style artwork that, when combined with its well-performed narration, has all the makings of pleasant little bedtime story. This makes sense, since Insomniac also plans to release a non-interactive version as a children’s book.

That story goes something like this: A young girl named Merryn builds a submarine from scraps of wood and metal so she can find her father, a fisherman lost at sea. On her search, she uncovers a world beneath the waves, the ruins of an underwater civilization, and meets some fantastic sea creatures, including a mermaid and a robot seahorse.

Between those storybook moments, the game plays out like an exploration-heavy MetroidVania action game. Players pilot Merryn’s sub, fighting off sea creatures with a mechanical claw and torpedoes, while finding new tools that allow her incremental access to new areas of the sea. All the while, the game’s narrator keeps players grounded in the story with in-game exposition.

Song of the Deep offers an experience that’s truly meant for all ages.

Since the game takes place entirely underwater, players can move as easily from floor to ceiling as they can from one end of the screen to the other, and the sub has a weighted movement evoking the sensation of floating. The result is that sub’s controls feel floaty and imprecise; the game does compensate for that level of control, especially in combat, yet the inability to move as fast as you’d like is enough to make you skip prolonged fights whenever possible.

To clarify, just because Song of the Deep has a story made with kids in mind doesn’t mean it’s an easy game. While it does hold your hand in some spots — the world map always shows your next objective — the game does not hold back in sending multiple waves of enemies after players, nor does it over-emphasize puzzle solutions. Where many game developers outside of Nintendo wrongly assume that games made for children should be very simple, Song of the Deep offers an experience that’s truly meant for all ages.

A story we’ve heard before

The game’s most distinctive characteristics are very close imitations of well-regarded indie games. The control of the sub — both its floaty movement and the dynamic between close and ranged combat — feels very similar to the aesthetically minded 2011 MetroidVania clone Insanely Twisted Shadow Planet, which had players explore dark caverns of an alien world in a flying saucer.

While not as obviously derived, it’s hard to not to draw a line between Song of the Deep’s narration and Bastion, which also relied heavily on a narrator to fill the player in on how her actions played into the game’s narrative. Like Bastion, Song of the Deep relies on the narrator to provide emotional context, and serves as connective tissue between interactive, in-game interludes and storybook cutscenes. When there’s dialogue, the narrator tells you what each character said. When a character feels something, it’s up to the narrator to fill you in.

Unfortunately, the game doesn’t successfully emulate either concept, never mind putting its own stamp on them. Frankly, Insanely Twisted Shadow Planet succeeded in spite of its controls, not because of them. The game’s distinctive visual style and interesting use of light and shadow kept players eagerly exploring.

Song of The Deep, by contrast, relies on its narrative to drive the story forward. Unfortunately, while the narrator’s voiceover nails the tone of a children’s book, the narration itself paints in broad strokes, and rarely provides the level of detail you need to make a game world come alive. In a 10-plus hour game, there’s plenty of time for the narrator to slip in some detailed descriptions, but many of the narrators, especially those directly linked to game mechanics, tend to sound dry and mechanical.

Song of the Deep feels rough around the edges on every level. Exploring Merryn’s ocean — the bread and butter of this kind of game — feels hollow. The majority of non-essential puzzles reward players with coins, which you can spend on sub upgrades at shops scattered throughout the world. While the system technically integrates puzzle-solving into the game’s progression, picking up 10, 50, or even 100 coins for solving one often doesn’t feel like adequate compensation for the time spent. There are plenty of treasures for player to go back and find with every new piece of gear, yet there are very few genuine secrets.

Meanwhile, many of the puzzles feel hampered by flaws in environmental design that, while minor, detract from the process of figuring them out. Multiple puzzle rooms feature pointy stalactites and stalagmites on the floor and ceiling, for example, which make paths too narrow for Merryn to carry key items with her claw unless they’re angled just right. The puzzle isn’t broken, and not everyone will have to back up and readjust, but it’s the kind of unintentional hurdle that turns a brain teaser into a patience tester.

Long stretches near the end of the game seem to exist just to stretch the game’s playtime. In one late-game sequence, for example, players have to pilot the sub down a pitch-black trench while avoiding hard-to-see invincible enemies. While players do have a tool for navigating the darkness, the trial-and-error based “puzzle” feels like a hardship, not a challenge.

There are also technical oversights, of course. I’m loathe to criticize a game for bugs that can be fixed in post-release patches, but Song of the Deep has some of the worst, most impactful technical flaws I’ve come across in a long time. Without the game’s day-one patch, which went live prior to launch, a slew of progress-killing bugs effectively made it impossible to finish, because the game stores only a single save file (an enormous problem for players who purchase the disc-based version).

Even with the patch, the game features frustrating technical issues, including debilitating framerate drops, and save points that don’t activate.

The dark depths of a game gone wrong

Song of the Deep is a perplexing failure. When it was announced in January, Insomniac CEO Brian Hastings called it the studio’s “passion project.” It’s hard to believe that this bland, buggy game was a labor of love, especially when it came from a veteran studio known for getting creative even while working in well-trod territory.

The X factor is of course the game’s publisher, GameStop. While a video game is a group effort, and you can’t accurately attribute its failings to any specific person or group, it is fair to say that the game’s problems do not bode well for GameStop’s future in publishing. Everything about Song of the Deep — from its family-friendly appeal to its $14.99 price tag to its release date smack dab in the middle of gaming’s traditional slow season — seems geared around supplementing GameStop’s content needs. Viewed in that light, the game’s lack of daring and attention to detail make much more sense.