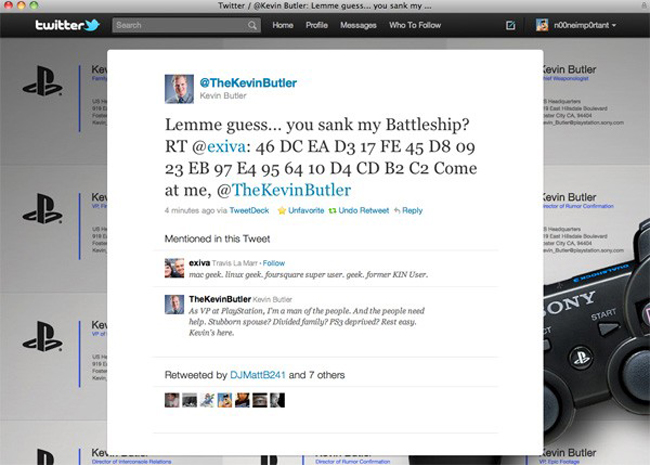 Someone over at Sony is in big trouble. Less than a month after the company launched its legal armada against the hacker group that jailbroke the Playstation 3 game console and released the how-to details online, someone at the company accidentally retweeted the “jailbreak” code through an official Sony Twitter account, reports Engadget.

Here’s what happened:  Twenty-four-year-old self-proclaimed geek Travis la Marr (aka @exiva) sent a message to the Sony-operated Twitter account @TheKevinButler containing the root code to the PS3, which unlocks the device, along with the challenge, “Come at me, @TheKevinButler.”

Not understanding the significance of the sequence of numbers and letters @TheKevinButler — an entirely fictional Sony employee whose tweets are presumably written by some poor intern at the company — thought la Marr was playing some sort of Twitter-centric game of “Battleship,” and retweeted the code to the account’s nearly 70,000 followers.

Done laughing yet? Ok, now, it gets better. Had Sony simply published the code that allows tech-savvy users to unlock the “unhackable” PS3, that would be bad enough. Unfortunately for the company’s PR and legal departments — and whoever published the damning tweet — Sony just sued infamous jailbreak hacker George ‘Geohot’ Hotz, along with 98 other members of the hacker group fail0verflow, for jailbreaking the PS3 and publishing their digital escapades online.

Sony just recently won a temporary injunction against Hotz which, ironically, prevents him from publishing information about the PS3 jailbreak. Who says there’s no justice in this world?

Needless to say, the offending retweet has since been removed from the @TheKevinButler feed. Luckily, la Marr published a screenshot of the exchange on his Tumblr blog, Tmblr.us.

So, will Sony go after la Marr next? (He did, of course, publish the codes before Sony retweeted them.) Who knows. Regardless, la Marr seems to have already put the whole situation into context. Writing on Twitter this morning, he says, “The irony of this all? …I don’t even own a PS3 #truefact.”

How to connect a PS4 controller to a PC