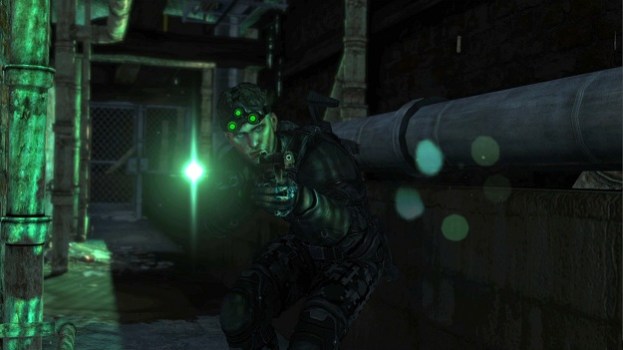 There was a day, years back, when the Splinter Cell franchise nearly drove me mad. The gameplay brought to the monster in me: the analytic, exacting gamer who demanded perfection. Playing a mission wasn’t fun if it wasn’t done perfectly, and completing objectives by accident made the level feel like a failure. Splinter Cell probably gamers to voluntarily restarted at the last checkpoint more than any other franchise in history.

I didn’t have to play in that style, but when a game is crafted in a way that allows you to move through an entire area without being seen once to complete objectives without the enemy even knowing you were ever even there – except for the occasional, otherwise inexplicable explosion and kidnapping or two – why would you play it any other way? I’m not even sure why they gave me a gun.

But not everyone enjoyed that level of aggravation – and there was plenty of aggravation until you learned the map and studied the patterns of your enemies. Some even took matters into their own hands and decided to turn the stealth series into a third-person action series, ignoring the shadows in favor of slightly more flashy methods like grenades, for instance. If there’s no one left alive to trigger an alarm, it’s pretty much the same as making it through unseen, I guess.

Over the years, the Splinter Cell franchise has evolved to accommodate this type of gameplay as well as sticking to its stealth roots. The guns-out approach was always there, but it was a secondary way to play. Splinter Cell was about sneaking through the levels unseen, even if it drove you mad.

The newest game in the series, Blacklist, continues the evolution of Sam Fisher into a gun-toting badass, even more so than in 2010’s Conviction. After playing two levels of the upcoming game over the course of a few hours, I can say this is shaping up to be by far the most accessible and well-rounded Splinter Cell offering yet. They even managed to keep a bit of the frustration, but it’s optional now.

The first thing to know about Blacklist is that there are three distinct ways to play: Ghost, Panther, and Assault. When you complete a mission, you are awarded a score based on the way you play. If you want to play stealth, you earn points for things like going unseen. If you want to go loud and kill, you earn points for things like number of dead. Panther falls somewhere in the middle and includes silent kills. The odds are that unless you are very deliberately trying to increase your score in one field, you will end up getting some points in each category. The score will then translate into credits.

As you make your mark and find your path, you will earn upgrades you can buy, which allow you to progress in the way you want. A robust loadout selection at the beginning of each mission includes everything from gloves to the type of goggle you take, to the color of the lights on the goggle. There are several options, and thousands of combinations. Some will also have specific attributes like better armor for combat, or thermal vision.

This is part of the new mentality of Splinter Cell – it is not just a single player campaign, it is an experience.

The title “Blacklist” refers to a plot against the United States by a terrorist organization known as the Engineers. The group has created a list of escalating attacks known as the Blacklist, and Sam Fisher is the only guy who can stop it.

This also represents something of a shift both for the game and the character. Fisher is no longer the solo rogue agent, nor is he a tool for an agency. He is now the leader of Fourth Echelon, and he has a team to help him. This team actually represents the upgradeable options in the game, along with presenting story options and plot points.

The team consists of Sam’s sometimes-ally Anna “Grim” Grimsdottir, as well as two new characters: former CIA Agent and sniper, Isaac Briggs, and the Q-like member of the team, the hacker and weapons maker Charlie Cole.

In the demo, both Grim and Charlie can help to upgrade Sam’s tools. Grim is in charge of the Pelican plane – your mobile headquarters, which operates a bit like the Normandy in Mass Effect, but with more apparent and instantly beneficial upgrades. If, for example, you purchase the cockpit upgrade, on your next mission you will have a radar. Upgrade the lab and Charlie – who you can purchase new equipment from – can then build rare items for you to use. There are several upgrades, and it will take time to earn enough cash to purchase everything. In fact, there is a chance you won’t be able to earn enough by playing the campaign alone, which brings us to the next reason for being on the Pelican.

When you start a game, you will be taken to the heart of the Pelican, and a board that shows you the missions available to you. Along with the current campaign mission, you can speak to the NPCs on the plane and unlock co-op events, which are stand-alone missions that help paint a bigger picture of the world. These are sidequests, but ones that you play with a partner to earn credits and flesh out the story. The competitive multiplayer will also be available through this screen, but it – like the co-op missions themselves – is still being kept under wraps. It will all fit within the confines of the story though.

Once you have accepted your loadout and chosen the style you want to favor by equipping complimentary items, you are then taken to a much more visually dense world than seen in Conviction. The two sections shown – Benghazi and London – were both filled with color and detail, making this the most visually striking Splinter Cell game yet. Paired with some exceptional graphics, this is easily the best-looking game in the series yet, and one of the best-looking games on this generation of outgoing consoles.

The first mission on display was Benghazi. But before even taking a step, it’s impossible not to mention one of the most difficult adjustments fans of the series will need to make – the loss of Michael Ironside as the voice of Fisher.

At E3 it was announced that Ironside would not be returning to the role. Ubisoft Toronto – the development studio created specifically with this game in mind – opted to go with someone who could handle the motion capture performance as well as the voice. Ironside, now in his 60s, was replaced by Eric Johnson, an actor best known for his role as the titular character in the short-lived SyFy series, Flash Gordon, and before that as Whitney Fordman in Smallville.

The movement looks great. In fact, it is one of the best things about Blacklist, but it’s difficult to hear anyone else as Fisher, and not just because of familiarity. Ironside’s gravelly voice carried a hint of menace and even gravitas, while Johnson’s does not. It is an average voice for an exceptional character. It’s so generic it’s jarring, and simply doesn’t suit the character. You can hear Johnson’s youth coming from the mouth of a grizzled warrior, and it’s off-putting. That may end up being a minor quibble, though, and perhaps time and familiarity will help overcome that.

But with the loss of Ironside’s voice comes a new way for Fisher to move. The motion capture work makes Fisher’s movements seem free and smooth, but the game itself has also changed to accommodate a new style of movement. Fisher can now move in an almost parkour-like way, and even when he is in cover, he has more options than ever before.

You can definitely tell that this is a Ubisoft game. The way Fisher moves on walls is reminiscent of Assassin’s Creed, while the cover mechanism is similar to that of Ghost Recon. Fisher can move like a snake through areas, and the execution ability from Conviction returns, allowing you to target up to three enemies and then tap the shoot button to take out all three without them having the chance to fight back.  There is also a new mechanic known as “killing in motion,” which allows you to do exactly that – kill while on the move. If you are familiar with an area and are trying a speed run, you could simply dance through levels, leaving a few corpses in your wake.

Even with the Ubisoft familiarity bred into the game, the controls take a bit of practice, but with only a bit of repetition it’s easy to pull off moves that look and feel incredible. That is, if you want to.

There is a much greater emphasis on combat than in the original games in the series, and even more so than in Conviction. You still have the option to go stealth, but it will require both patience and discipline, as you hang from a ledge and an enemy casually shows you his back, then that tempting icon to quietly grab him and send him plummeting to his death appears. It can be fun, but it will count as Panther points, not Ghost.

To help you through, Fisher once again returns with a bevy of gadgets. Silent drones with cameras, sticky cameras, and plenty of other options await. You can even select whether you want to stay non-lethal or lethal, and your gadgets will match.

The levels shown were very directed, and you will always have one direction to go, but there will also be several hidden objectives to find. Every area will have a few ways through it, but there isn’t much room to explore, as other stealth action games like the recent Hitman: Absolution offered.

Blacklist is a narrative that allows you to choose the tone. If you want to get bloody, you can. If you want to be a whisper in the wind, you can do that too, but the emphasis is more on the possibility of combat – or at least silent disposals. That’s certainly not a bad thing, and it makes the game far more accessible than the previous offerings that had you do things like walk through the heart of the CIA and check your progress inch by frustratingly awesome inch.

If you are a fan of the original style, and only the original style, than this game might feel a bit dumbed down. But that reaction misses what sets this title apart: It’s a sandbox of gameplay in a linear and enclosed map. Combining Fisher’s new movements with his upgradable equipment also makes the game feel constantly fresh, and playing through the same mission repeatedly can offer something new every time.

The loss of Ironside may prove to be a bigger deal than Ubisoft thinks, or it could end up being an overreaction from people (like me) who aren’t sold on Johnson. Time will tell. But the game looks stunning. The art design is significantly improved over Conviction, both in the color and the design of the levels.

Putting aside any issues I had with the comparatively easy stealth mechanics and directed routes, plus the action sections that force you into combat, the game was just fun to play. This is a big year for Splinter Cell: Ubisoft is moving a head on a film version of the franchise starring Tom Hardy, and this game will likely prove to be one of the last, best offerings on this generation of consoles. We’ll have to wait until it is released on August 20 to see if Ubisoft crushes it, but from what has been displayed thus far, it certainly is well teed up.