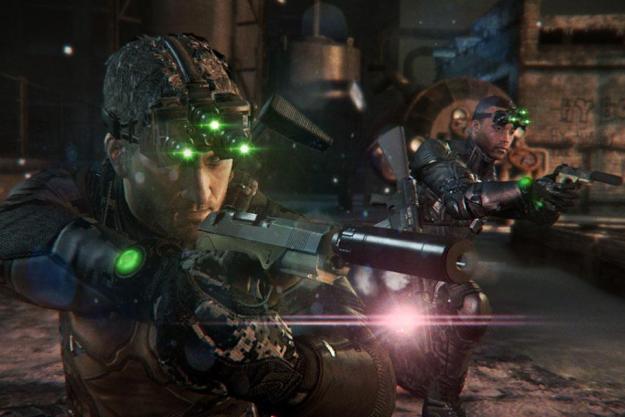 “‘Splinter Cell: Blacklist’ succeeds more than it fails, with an uneven story the only sore spot in an otherwise impressive and content-rich game.”

Splinter Cell: Blacklist is a technically impressive stealth/action game that is fun to play, yet dreadfully boring to watch. Do we even care about Sam Fisher anymore or is he simply an interactive vehicle for silently dispatching armies of AK-47-toting Bad Guys from the shadows? You wouldn’t be wrong for thinking he’s the latter by the time the dull story closes.

Crossing off the Blacklist

Blacklist picks up after the events of Splinter Cell: Conviction. Third Echelon, the now-former National Security Agency sub-branch that Fisher and his people operated out of, has been shut down. In its place is Fourth Echelon, aka 4E, a multi-disciplinary covert ops unit focused on counter-terrorism.

The story focuses on 4E’s efforts to derail the actions of a terrorist group known as The Engineers. The baddies have a master plan called “The Blacklist” that amounts to a series of escalating terror attacks on United States locations and interests. They have just one, simple demand: the U.S. must immediately recall all of its troops operating abroad.

It’s a promising synopsis that fumbles badly in the execution. Character development is sorely lacking, with the all-business pre- and post-mission cinematics exemplified by quick camera cuts and short, punchy bursts of expositional dialogue. There’s no heart to any of it, no personal connection built with any of these characters; just a constant deluge of plot-advancing information.

Sam and his pals operate from the Paladin, a flying fortress that serves as 4E’s mobile home base. You are free to explore the multi-room space between each mission, and it’s here that you’re expected to forge personal connections with the rest of 4E.

This is a technically impressive stealth/action game that is fun to play, yet dreadfully boring to watch.

Wandering around the flying base is always a dull, if optional, exercise. Sam slows to roughly half speed here, a jogging pace that feels immediately like a chore to play with in contrast to his much more agile in-mission behavior. Even an act as simple as opening a door – something that takes less than a second in your average mission – involves a laborious animation here.

As the big boss of Blacklist‘s new counter-terrorism unit, Sam’s downtime between missions is ostensibly meant to be filled with idle, relationship building chatter. That, along with the promise of collectibles, is your motivator for exploring the Paladin and visiting your team members. There’s Sam’s old pal Anna ‘Grim’ Grímsdóttir, who handles intelligence and communications, Isaac Briggs, a fellow field operative, and Charlie Cole, the young tech wiz. Conviction’s Andriy Kobin also comes to link up with 4E as the story progresses, and he’s quickly established as a sort of de facto team member.

Each character also functions as mission-giver or upgrade shop, but there’s little depth to color their personalities beyond what you see up front. They’re cardboard cutouts. Even Grim, who has so much history with Sam, is memorable as little more than “lady on the radio.” Splinter Cell hasn’t ever been considered the epitome of video game storytelling, but the characterizations and plotting are so lazy, it’s like the writing team didn’t even bother to try this time.

Ultimately, it’s this glaring absence of anything more than surface-level character development that does in Blacklist’s story. Nowhere is this more apparent than in the phone calls Sam can make to his daughter, Sarah, between every mission. Their exchanges are typified by clichéd familial exchanges and lame jokes. We get it, Sarah. You appreciate your dad’s sacrifices but not his absence. You’re not sure if you love him even though you obviously love him.

The whole string of Sarah conversations feels like an afterthought, especially since they never amount to anything in the context of the larger story. It’s disconnected, much like Sam’s in-person exchanges with those aboard the Paladin. There’s the Blacklist, and then there’s all this other stuff. Why should you care about any of it? The game doesn’t give you a reason to talk to Sarah, unless you have some lingering connection to her after the events of Conviction.

The disconnectedness of the story thankfully doesn’t extend to any other aspect of Blacklist. The more active stealth focus of Conviction carries over here with some additional fine-tuning. In addition to the returning “Mark and Execute” feature, which allows you to automatically and stylishly take out up to three marked enemies, there’s the new “Killing In Motion” ability, which allows Sam to quickly dispatch threats while he’s on the move.

Blacklist hits its highest moments when you’re able to run quickly through a room, dropping bodies as you go without ever raising an alarm.

Traversal in general feels smooth and satisfying. Blacklist hits its highest moments when you’re able to run quickly through a room, dropping bodies as you go without ever raising an alarm. You know, the “ghost-assassin” power fantasy that characterizes the more recent Splinter Cell games. Conviction went there, and provided a good foundation to work with for this follow-up. Blacklist is even more effective than its predecessor when it comes to making you feel like a properly badass spy man.

Credit goes to the level designers as well for coming up with an elaborate series of multi-path environments. There’s rarely just one option for dealing with a particular situation, even when mission parameters carry “no alarm” and/or “no kill” requirements. You’ll even find merit in failing intentionally on occasion, as a brazen dash into heavy fire often reveals the end point of an alternate route that you hadn’t noticed earlier.

Experimentation and intentional failure are essential for those that want to play with all facets of Blacklist‘s story. There are separate scores at the end of each mission for your use of Ghost (non-lethal stealth), Panther (lethal stealth), and Assault (boom) play styles. All of this is tracked on leaderboards, of course, though there’s also a social interface called ShadowNet that allows you to issue and accept challenges to/from your friends for in-game cash rewards.

The only real shortcoming as far as play goes once again relates to the Paladin. The mobile base is your centralized location for accessing all content: the solo campaign, the co-op campaign, the solo/co-op secondary missions, and competitive multiplayer. In other words, you’ve got to be on the plane to access any of the game’s various play modes. Woe to the player that chooses to jump into some multiplayer mid-mission; that’s simply not an option without sacrificing your checkpoint progress and returning to the Paladin.

There’s a lot of content in addition to the core story missions. Grim, Charlie, Briggs, and Kobin are all mission-givers, with each one’s outings offering a different style of play. Grim’s are the most traditionally Splinter Cell of the bunch, focusing on non-lethal stealth and evasion. Kobin’s fall more in line with Conviction’s active stealth play. Charlie swings all the way to the opposite end of the scale, with a focus on straight-up assault.

While any of these missions can be played solo or in co-op, the Briggs missions can only be played in co-op. This is essentially a separate two-player campaign that sits alongside the main story in Blacklist and is friendly to all three styles of play. It serves as an epilogue of sorts to the events of Conviction. The fundamentally solid controls make all of these secondary pursuits a blast to play through.

Then there’s competitive multiplayer, built on the foundation of the fan-favorite Spies Vs. Mercs mode. These come in a number of variants, including a new 4v4 option to complement the traditionally 2v2 mode, but they all pit one team of low-health Sam Fisher-like Spies against high-health, slow-moving Mercs with machine guns. Third-person sneaking versus first-person shooting.

There’s great fun to be had in Spies Vs. Mercs. Veterans of online shooters like Call of Duty and Halo should expect a brutal and bloody learning curve, but it’s worth the effort. The thrill of snuffing out a Merc that you’ve tailed and toyed with for multiple minutes is only matched by the soaring joy of capping the last fool Spy when you catch him camping in a shadowy corner.

All of your progress, in the campaign, in the secondary missions, and in Spies Vs. Mercs, is recorded in a central profile. You earn in-game cash for just about everything, and you can spend it on outfitting either Sam or one of your Spy/Merc classes. A progression system on the multiplayer side trickles the unlocks, giving players time to learn what they like before they invest. Overall, it’s a solid, if conventional, system.

Splinter Cell: Blacklist is a hefty package, with Ubi Toronto establishing a solid framework for future entries in the series. It’s an impressive amount of content that’s been stuffed in here, a huge upgrade from the already-generous helping in Conviction. Longtime fans of Sam Fisher will struggle to find anything to appreciate about these characters or the struggles that they face, but those concerns are quickly forgotten in light of Blacklist’s exceptionally well-polished play.

Dead Island 2: release date, trailers, gameplay, and more
The best Xbox Series X headsets
The best PS5 headsets
The best multiplayer games on Nintendo Switch
Pokémon Legends: Arceus deserves DLC before Scarlet and Violet
Hurry — this HP gaming PC is $450 for Cyber Monday
This is hands down the best Nintendo Switch Cyber Monday deal
How to get a free Gengar in Pokémon Scarlet and Violet
‘Wordle’ today, November 28: Answer, hints, and help for word of the day (#527)
Need a PS5 controller? This Cyber Monday deal has you covered
Save $50 with this (Oculus) Meta Quest 2 Cyber Monday deal
GameStop Cyber Monday Deal: Buy 2 Get 1 on all preowned Xbox One and PS4 games
Starship Troopers: Extermination turns sci-fi satire into a co-op shooter