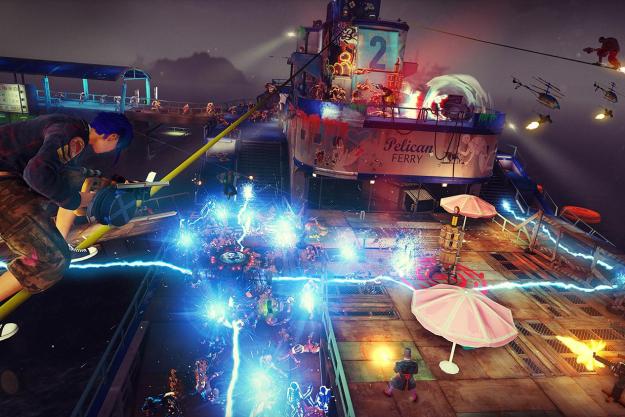 “Sunset Overdrive is the uncontested Xbox One system-seller in Microsoft’s fall 2014 lineup.”

It’s a scary time to love video games. Some fret about the growing popularity for the medium taking their special hobby away. Others worry about the very real danger of harassment and bullying, and their ugly, criminal cousins. Sunset Overdrive is a refreshing respite from these trying times, a reminder of the beautiful escape that interactive adventures can offer.

That’s because developer Insomniac Games commits. It commits to building an experience that revels in its own video game-ness. It commits to putting fun first, forever and always, even when it’s at the expense of logic and reason. And it commits, above all, to delivering an empowering fantasy in its so-called “awesomepocalypse,” one that amounts to a joyous celebration of difference.

Sunset Overdrive is an empowered end-times scenario in which everyone’s been given a chance to seize life by the balls.

The premise: Sunset City is overrun by orange-blooded mutants. They were made that way by a toxic energy drink, Overcharge, from FizzCo. When a launch party for the new beverage goes awry and guests start transforming into flesh-hungry beasts, you — a put-upon janitor — flee the scene and fall into a survivor role. Now it’s just you and a handful of circumstantial friends up against armies of slavering mutants, kill-all-humans FizzCo robots, and masked, gun-toting bandits (or “Scabs,” as they’re called).

Sunset Overdrive forgoes the grit and filth of recent apocalyptic fictions like The Walking Dead or World War Z. It’s an empowered end-times scenario, one in which everyone’s been given a chance to seize life by the balls and reinvent themselves in a world that is without rules and social mores. The punk-rock spirit evident in the game’s dynamic soundtrack, which molds and shapes itself according to the tenor of the on screen action, is merely a reflection of the core fun-focused conceit.

In your hands, Sunset Overdrive plays like the bastard child of Tony Hawk and Ratchet & Clank, if Johnny Rotten were its godfather. Despite the intuitive maneuvers — grinding is a one-button affair and bouncing is as simple as positioning a crosshair over where you want to land — this is a highly technical game with a by-design learning curve. Pause too long to line up a target and you’re quickly overrun by the hordes of enemies. In order to survive, you’ve got to keep moving.

The result is an action-and-traversal mix that owes some of its best moments to the Dreamcast classic, Jet Set Radio. But Sunset doubles down on the sensory overload. The screen is filled with garish colors and busy environments. Collectibles and score challenges litter the city in numbers almost equal to your foes. There’s something to leap for or otherwise distract you around every corner. And it all works because it’s built with such purpose.

Grinding and bouncing isn’t just your main mode of transport, it’s also your only real advantage in combat. Beyond the basic “move or die” conceit, the more you mix fancy moves in with your death-dealing, the more a four-stage Style meter builds. Each new Style level activates the effects of different Amps that you’ve equipped, which do everything from infuse your melee attacks with arcs of electricity to cause explosions every time you bounce off an object.

The Amps, in turn, are unlocked by hunting down assorted collectibles, everything from inflatable FizzCo mascots to smelly tennis shoes and toilet paper dangling from power lines and street lights. More than just markers of progress toward Achievement or Trophy bragging rights, these collectibles double as currency. Want that handy-looking fire amp? You’ll need to collect five more tennis shoes before you can buy it.

It commits to putting fun first, forever and always, even at the expense of logic and reason.

There are also unlockable Overdrives, which you “purchase” using badges earned from repeated activities. Find yourself grinding a lot? Then you’ll generate a lot of grind badges that you can, in turn, spend to unlock improved Style generation for grinds. The Overdrives aren’t built to be game-changing, but they help encourage players to stick with whatever style of play suits them.

Sunset Overdrive is a game with layers, a complex network of interlocking elements that all feed into the madcap fun. It’s a credit to Insomniac’s efforts that the learning curve is as gentle as it is. The game still isn’t particularly accessible if you’ve never held a twin-stick gamepad before, but the gradual, clearly signposted tutorial moments do a great job of acquainting experienced joystick jockeys with the unique control scheme.

Credit the writing for making these early bits easier to bear. Tutorials are led along by a booming voice from the sky that sounds like some profane video-game god. Like so many other improbable moments, no one inside the fiction really questions its existence. Of course there’s a disembodied voice here to show you how to play.

There’s a self-awareness in the script that frequently punches a hole in the fourth wall as it acknowledges itself for what it is: A goofy-ass video game. Like everything else in Sunset Overdrive, its delivery embraces excess. The writing falls all over itself at every turn to remind you that you’re playing a game, but it does so in such a charming way. Where other games have often tried and failed to send up conventions of the interactive medium, Sunset Overdrive succeeds more than it stumbles.

It’s not just just self-referential humor, though. In Sunset Overdrive’s vision of a “fun” post-apocalypse, literally anyone — black or white, male or female, limbed or limbless (and every possibility in between) — can seize the opportunity to reshape his or her existence. This is evident in the colorful characters populating every corner of the game. You’ve got nerdy LARPers channeling their fantasy existence as freedom fighters, and a gang of ex-cheerleaders protecting sickly children from behind Dia de Muertos makeup.

You’ve even got the ranks of the enemy Scab faction – think Mad Max-style bandits, sans cars – filled out by men and women. Think about what an unusual sight that is in a video game: Bad guys are often guys. But the Scabs employ men and women in equal numbers, and they’re all out to kick your ass. The entire crew is introduced in a cinematic that features three tough-talking ladies. It’s downright refreshing.

The straight line through the plot never ceases to try different things. Whether you’re riding on top of a speeding train, grinding and leaping between rails while a giant inflatable mascot fires rockets at you, or directing catapult fire in four different directions as you aim your own hand weapons at attacking hordes, there’s always something fresh and different to try in the story missions. They more than justify the relatively rote objectives (fetch, kill or traverse something) that fill out the optional missions and challenges, scenarios that could easily end up being story missions in any other game.

Sitting alongside the story is Chaos Squad, an eight-player cooperative mode. It’s a five-round gauntlet that tasks participants with completing a series of simple objectives. Participants vote on the makeup of each of the first four rounds, deciding not just the objectives but also the benefits received – and enemy Chaos generated – in the final round. This concluding showdown amounts to a wave-defense scenario in which players get to position traps and keep enemies at bay while fresh Amps cook.

It’s yet another system-driven component of a game that is already layered with them. Playing and succeeding in Chaos Squad can net you rare and powerful Amps that you then take back into the main game. It’s not perfect; difficulty doesn’t scale around the number of players in a session, so it’s always best to go in with a team of eight. But that’s also part of the fun. With a lobby at capacity, Chaos Squad produces some of Sunset Overdrive’s most insane, over-the-top moments.

This is the sort of game that people buy a new console for. It’s just that good. Sunset Overdrive celebrates the things that set us apart as gamers, and it draws strength from those differences. It never loses sight of the fact that fun trumps all in this sort of escapist fantasy. It’s not a statement on how all games everywhere should be, but it’s a stirring reminder of how entertaining they can be. It commits. And that makes all the difference.