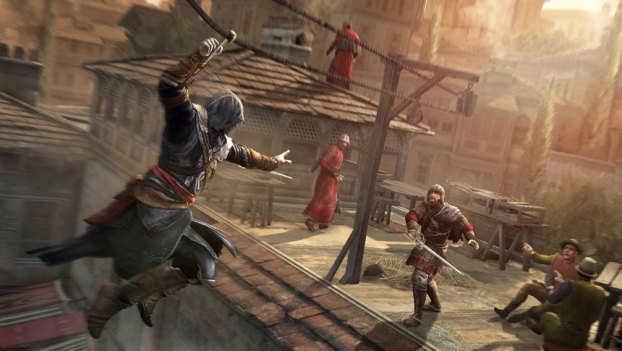 It’s been a big month for video games (to put it mildly), and we were treated to yet another hotly anticipated title arriving on shelves last week. Assassin’s Creed: Revelations is the fourth game in Ubisoft Montreal’s hit series about a man named Desmond who discovers that he’s descended from a long line of assassins and is forced to relive key moments of their lives.

With every prior installment of the Assassin’s Creed series considered a critical darling, there were high expectations for Revelations – and thus far, it appears to be living up to the hype. (Make sure to read our Assassin’s Creed: Revelations review for all the details.)

Since your Revelations-fueled weekend will likely be devoted to climbing everything in sight, diving into conveniently placed haystacks, and wielding any number of bladed tools of the trade, we’ve put together something to check out during the down time for an even more immersive experience in the Assassin’s Creed universe.

Remember when the Revelations trailer arrived on the scene like a dagger-wielding assassin leaping at you from a crowd? The breathtaking trailer debuted in June, so here’s a quick refresher:

Now that you’ve watched the official Revelations trailer, make sure to check out the “Literal” version if you haven’t done so already – but don’t be surprised if you find yourself musically narrating everything you do for the next hour or two. It happens to the best of us.

“RUN UP!… In slow motion, kick a guy in the head… Stab his friend…Spin around, roll off… Punch a face…”

Now that is candy for the ears, folks.

While we’re on the subject of funny videos, it’s worth noting that Ubisoft showed off its own sense of humor earlier this month in a promo created by the developer’s Dutch studio. In the video, assassin Altair attempts to navigate his way through an urban landscape in modern-day Netherlands, and finds that things aren’t quite as simple in today’s world.

On the other side, however, is a decidedly unofficial parody of Assassin’s Creed that also serves as a warning to anyone who tries to replicate their in-game activities in the real world. In the video below, you can see what happens when a guy dressed like Altair decides to create his own Assassin’s Creed simulation at the local market – much to the annoyance (and occasionally freak-out) of fellow shoppers.

My favorite part? When he tries to simulate the in-game ability to avoid attention by sitting down at a bench, but the guy next to him keeps trying to ask if he’s okay (around the 1:18 mark).

One final piece of must-watch video is Assassin’s Creed: Lineage, the three-chapter film produced by Ubisoft that premiered online in 2009. The short film served as the prequel to Assassin’s Creed II and tells the story of Giovanni Auditore, the father of the game’s main character, Ezio Auditore de la Firenze.

Here’s the first chapter of the film, which was directed by Canadian filmmaker Yves Simoneau and features many of the same voice actors who perform in the Assassin’s Creed games, and the work of 300 and Sin City digital effects team Hybride Technologies:

You can also buy the entire film on Amazon if you want to add the DVD to your collection.

What to listen to

The Assassin’s Creed franchise has received a lot of praise for its signature scores that reflect the cultural theme of each installment, and with Revelations bringing all of the previous storylines together, the new soundtrack is a mix of Greek, Renaissance, and Middle Eastern instrumentation, among other elements. Award-winning composer Jesper Kyd has created the musical element of all the games thus far, and he’s joined by fellow composer Lorne Balfe on the Revelations soundtrack.

If you’re the sort who gets a chill when you hear certain portions of the intense, mood-setting Revelations score, the full album offers 80 tracks’ worth of shivers and heart-pounding musical moments. You can pick it up on Amazon.com or iTunes, and Kyd has provided a few sample tracks on his personal website.

Along with all of the audio and video elements you should add to your queue, there’s also quite a bit of critically praised reading material you might want to add to your to-read list.

Much like other games, there’s also a comic book tie-in for Assassin’s Creed, but unlike many of those properties, this comic actually received praise from comic fans and gamers alike for its compelling story and impressive art. Assassin’s Creed: The Fall is a three-part series written and illustrated by award-winning comic creators Cameron Stewart and Karl Kerschl. The series jumps between late 19th century Russia and the United States in 1998, and follows assassin Nikolai Orelev and his descendant, Daniel Cross.

You can download the full Assassin’s Creed: The Fall at Comixology, or check out a preview of the first issue before you decide whether to pick it up. Heck, there’s even a video trailer for the comic, featuring some art and commentary from the comic’s creators:

It’s only human to want to know what’s next, so while you’re playing through Revelations, rest assured that there’s more Assassin’s Creed on the way.

Last month, news hit the wire that Ubisoft had reached an unprecedented deal with Sony Pictures to develop an Assassin’s Creed movie. The reason the deal is so unusual is because it gives the game developer an extensive amount of control over the project — something that the rest of Hollywood is not exactly thrilled about.

There’s also the recent confirmation from Ubisoft that the next game in the franchise will arrive next year — so we don’t have long to wait for more adventures with Desmond’s deadly ancestors.

“In Assassin’s Creed we set up a timeline with this whole end of the world plot of December 2012,” explained Ubisoft CEO Yves Guillemot during a conference call. “That’s fast approaching, and the story we have to tell, we obviously need to do it before we arrive at that point.”

So there you have it, fellow assassins: A comprehensive guide to what you can be reading, listening to, or watching in those rare periods between contracts.

Remember: It can’t all be jumping out of crowds and plunging your blade into surprised targets — sometimes you have to sit back, relax, and enjoy the finer offerings the ‘net makes available. Do it for Ezio.

Digimon Survive beginner’s guide: 8 tips and tricks to get started

Fortnite Chapter 3 guide: Season 3, week 9 quests and how to complete them