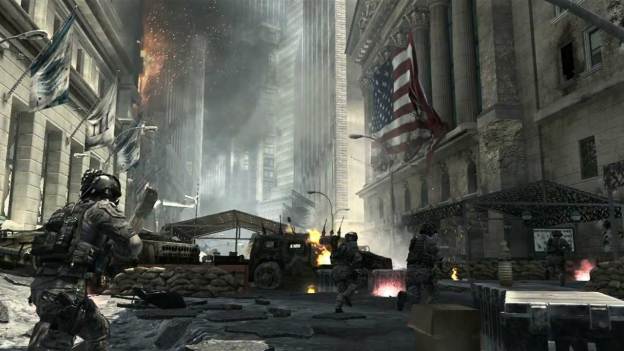 When a game has the most successful first-day sales of any entertainment product in history, it’s pretty safe to assume that it’s all anyone’s going to be talking about the following weekend. Call of Duty: Modern Warfare 3 did just that last week, so it should come as no surprise that we’re making it the focus of this week’s Everything Guide.

From movies and music, to parodies and other content found around the ‘net, here’s everything you need to make your Modern Warfare 3 experience as comprehensive as possible.

Since Modern Warfare 3 is a direct sequel to its 2009 predecessor, there’s a good chance it’s been two years since you last got locked and loaded with Soap, Price and the rest of Task Force 141. If you’re looking to get back into the Modern Warfare mindset, you don’t need to play through the previous installments. You can just watch some of the cinema that inspired the series.

One of the most prominent examples of a film that influenced the tone and themes of the Modern Warfare franchise is 2001’s Blackhawk Down. Based on the real events chronicled in Mark Bowden’s book of the same name, Ridley Scott’s tense tale of U.S. soldiers fighting through a heavily armed enemy militia in Somalia earned rave reviews for its attention to detail and realistic portrayal of military action and strategy, and there’s been no shortage of comparisons to the storyline of Modern Warfare 1 & 2. As an added bonus, the presence of actors Josh Hartnett, Ewan McGregor and Eric Bana is likely to be a selling point for your significant other. (One piece of advice: Don’t let on that you’re watching the film as prep for your upcoming marathon gaming session.)

Moving on, if you’ve been following the development of Modern Warfare 3 from the start, there’s very little chance you missed the awesome ads that hit the airwaves over the last month or so. In the rare event that you missed Sam Worthington and Jonah Hill profess their love for the series in “The Vet & The Noob,” make sure you check that one out – as well as the Jay Leno spoof that put The Tonight Show host in the middle of a MW3 skirmish.

You know a game’s gone mainstream when it hits the talk show monologues, eh?

Of course, as with any popular game release, there are a lot of Modern Warfare 3 parodies finding their way online, too. While most of them are forgettable, there are one or two out there that might prompt a chuckle. For example, here’s a Modern Warfare-themed spin on John Mayer’s song “Heartbreak Warfare” that seems to sum up the first week of MW3 mania pretty well:

What to listen to

When it came time to put together the Modern Warfare 3 score, Activision recruited popular composer Brian Tyler, who’s no stranger to military-themed projects. Along with composing the scores for The Expendables and Battle: Los Angeles, Tyler also created the musical element of 2008’s Rambo – so we’re pretty sure he knows how to capture the spirit of a battleground.

All 20 tracks of the Call of Duty: Modern Warfare 3 soundtrack are available on Amazon and iTunes, and just in case you needed any more reason to pick it up, Activision will donate all proceeds from the sale of the soundtrack to their “The Call of Duty Endowment” – a nonprofit charity that assists returning veterans in their transition back to civilian life.

Here’s a sample of the “Modern Warfare 3 – Main Theme” from the soundtrack:

Those who have only played the Modern Warfare games are missing some of the story. If you’re the sort who craves the complete history of Task Force 141, make sure to check out the Modern Warfare 2: Ghost comic book series published by DC Comics. The six-issue series was published in collected form last year, and is available as a digital-download via Comixology for the DC Comics app.

As the title implies, the series explores the history of the mysterious Task Force 141 member Ghost, and is set before he becomes a member of the team. Written by veteran comics scribe David Lapham, the series also reveals the origin of his skull-like mask and why he calls himself “Ghost.”

You can check out a preview of the first issue at IGN, but here’s a look at the cover:

Finally, if you’re looking for total immersion in the Modern Warfare 3 scene, there’s a good chance you’ve already got your hands on one of the official Xbox 360 Modern Warfare 3 controllers or wireless headsets. If not, well… we won’t tell anyone.

There’s also a wide range of Modern Warfare 3 clothing and other merch available around the ‘net for those rare moments when you leave your console and venture into the great outdoors over the coming weeks. Amazon has a nice selection of Modern Warfare 3 and Call of Duty goods – including a “Ghost”-style balaclava.

Personally, I’d opt for the understated-yet-awesome MW3 t-shirt, but that’s just my taste. (I wouldn’t turn that Modern Warfare 3 hoodie down, either.)

So there you go, Call of Duty fans: everything you need for complete Modern Warfare 3 immersion.

You still have a few hours of weekend left, and many more days left of late-night gaming, so make sure to check out some of the items in this guide while you’re taking a break. Don’t take too long, though – there’s a war to be won.

Everything we know about Suicide Squad: Kill the Justice League