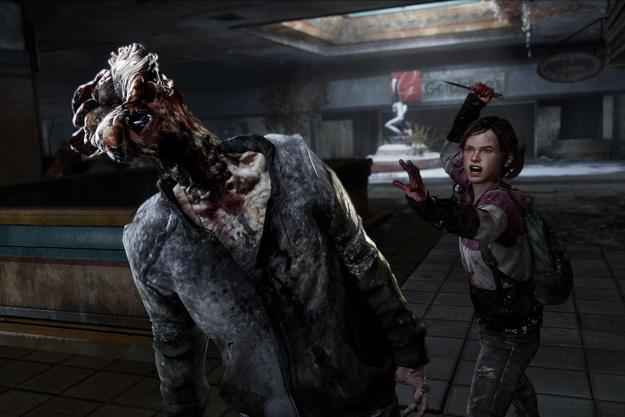 The Last of Us: Left Behind
Score Details

“The Last of Us Left Behind DLC offers both a good and bad re-imagining of the original game.”

One of the things that made The Last of Us such an arresting and eye-opening game was its continual rebuttal of action-game conventions. At first glance it looked like countless other games, but on closer inspection that turned out to be a setup. Things we take for granted in similar games were turned on their head. Combat, for example, was something you were forced to do rather than wanted to do, and the game was better for it. Every action you took resonated. Every bullet spent or bomb thrown mattered. Killing an enemy was a big deal. Tense shootouts forced you to battle a dwindling inventory and your own character’s limitations as much as the enemies. And for the character of Ellie, killing was a soul-shattering experience that lingered with her.

In the DLC Left Behind, many of those conventions, unfortunately, revert to the genre’s default. You take control of Ellie for three to four hours, jumping between two moments in her life. The first is a prequel to the game and introduces us to the character of Riley Abel, a friend of Ellie’s that has connections to the rebel militants, the Fireflies. The second is deep into the primary campaign, and takes place during a moment when Joel was indisposed. Saying more would be a spoiler, but it fits well within the original game’s framework.

The game jumps from time period to time period, as the teenage girls explore a mall outside of the Boston quarantine zone prior to Ellie meeting Joel, and then again in another mall, this one half way across the country. Despite that unifying thread, however, the two time periods aren’t really that connected in either story or gameplay.

The first time period is heavily story driven. Ellie hasn’t yet gained many of the survival abilities she’ll later learn from Joel, so much of this section – with a few exceptions – is essentially an interactive movie. Ellie and Riley have a deep, complicated friendship, which is revealed through a series of conversations. This is where the game is at its best.

Ellie and Riley’s story is sad, touching, and funny, even if there isn’t much to do in terms of gameplay.

The Last of Us featured strong gameplay, but it was the story that made it so memorable. It was a very human story, despite the inhuman elements, and the focus on the friends retains that. Ellie and Riley’s story is sad, touching, and funny, even if there isn’t much to do in terms of gameplay.

The later section, however, is entirely gameplay oriented. Without giving any spoilers, Ellie has a single task to accomplish without the benefit of Joel. This proves more difficult than it first seems, and she is quickly sidetracked. Throughout it all, she is hunted by both the infected and humans.

Some of the areas Ellie needs to cross can be navigated through with stealth, but combat is much easier. There are even sections where you must clear the area before you can progress. Ellie wasn’t a fighter in the previous game, but she is now, and the game encourages you embrace this. Ammo is relatively plentiful, as are crafting items to create additional weapons like bombs. She also is a much better shot than Joel ever was, and can pick off enemies from a distance.

Gameplay is smooth and responsive, and switching between items creates several creative possibilities. Throw a bottle against a wall to attract enemies, then toss a bomb. Sneak up behind a human and stab them, then let their buddies chase you into a group of infected. You can even trick the two groups into fighting each other without ever being seen. It all works on that level, but it is counter-intuitive to what the game was all about.

The Last of Us was always about survival, and that included combat. With Left Behind that isn’t an issue. You can easily fight your way through most sections, which cuts down on the tension and makes the game feel like so many others. PArt of that is down to the nature of the DLC, where inventory management isn’t an issue, but mostly it is a consequence of the level design that forces you to fight. The emphasis on combat also slightly changes the character of Ellie. One of the primary themes of the original game was Ellie’s maturation. She did what she had to in order to survive, but leaving a pile of bodies behind her would have been unthinkable. That’s not the case in Left Behind.

With that said, the DLC does help expand the character of Ellie – at least the prequel section. The DLC isn’t essential to the story, nor does it change anything. It further deepens our understanding of one of the better developed characters in video games though.

The Last of Us DLC: Left Behind adds a little to the overall story, but nothing that most will notice – or really even care that they missed. The combat – while pleasing enough in terms of gameplay – stands in contrast to the difficult balance the first game was so masterful about creating. If anything, the best thing Left Behind does is to encourage fans to once again consider playing through The Last of Us. Left Behind doesn’t quite recapture the magic of the original game, but it does remind us why we liked it in the first place.

Last of Us Part I coming in September, multiplayer spinoff in development

Call of Duty Warzone 2.0 will remain on last-gen consoles when it launches this year