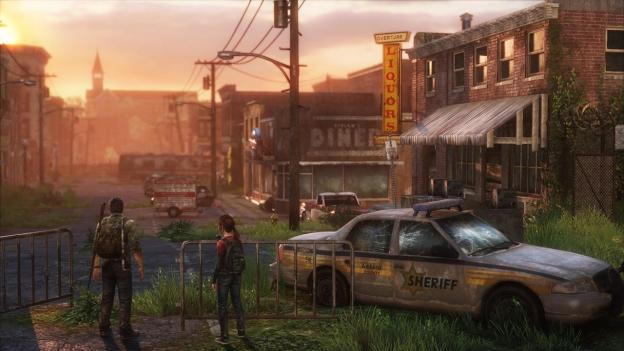 On June 14, while the gaming industry focuses its attention on Los Angeles for E3, many PlayStation 3 fans will be busy immersing themselves in Naughty Dog’s latest creation. The Last of Us embraces the developer’s uniquely cinematic approach and applies it in a way that fans might not expect. The gameplay is a huge part of that, but all of the pieces arrayed around the mechanics are equally crucial in carrying across the idea that this is not simply Uncharted in a post-apocalyptic setting.

The Last of Us tells the story of a world where humanity is on its way out. Nature creeps in to reclaim most of the world’s cities and a global pandemic breeds infected at an alarming rate, poor souls that are more than willing to hunt down any humans that stray from the confines of government-controlled quarantine areas. You play as Joel, a man with a troubled past, as he travels across a dying America with a young girl named Ellie in tow. A bond inevitably forms between the two as they face danger together, and these experiences change them both. Naughty Dog wants you to care about these characters. To feel invested.

Sony and Naughty Dog showed off the game once more in LA earlier this week, with two playable demos designed to demonstrate the combat. They did more than that, however; the hands-on time also served to exemplify the philosophy behind this game.

At first glance The Last of Us looks like its sister franchise, Uncharted. The aiming mechanics are the same, the levels use a similarly linear design, and the gameplay is built on many of the same ideas about platforming and puzzle-solving. This isn’t a shooter, even though the game does offer some of that. Instead, The Last of Us is about survival. Sometimes, survival means running for your life.

The first demo introduces the small town of Lincoln, close to the city Pittsburgh, where Joel and Ellie are headed to meet with someone named Bill from Joel’s past. The two travelers need to score a car, and Joel is more than willing to lean on his old friend to make that happen. You might remember Bill from his reveal in Naughty Dog’s 2012 Comic-Con footage reel.

Joel and Ellie make their way through the overgrown Pittsburgh suburb and quickly find it to be littered with traps and infected. Their alone time together offers a clearer picture of the complicated relationship that exists between them. Joel is with Ellie due to an obligation, yet he is also incredibly protective of the girl despite his gruff talk. This plays out in the dialogue, as well as in the gameplay, where Joel always takes the lead while Ellie tries to help when she can.

The two must work together as they move deeper into the town, finding planks and ladders to help them reach rooftops and avoid the roaming infected on the ground. Stealth and evasion are often the most effective tactics for dealing with the infected, but there are times as well when combat cannot be avoided.

Ammo is scarce in The Last of Us, and makeshift weapons – anything from a brick to a bottle to a lead pipe – appear in greater abundance. Each melee weapon has a limited amount of durability, represented in the game by a bar that diminishes with us. These makeshift weapons are effective tools for survival in one-on-one encounters. Not so much when they gang up on you, however.

Certain enemies are tougher than others as well. Assuming Joel moves quietly enough, he can often sneak up and use his bare hands to stealthily dispose of threats that stand in his way. Some, like the deformed and blind “clicker” infected – a sightless creature that navigates using echolocation – require the use of a shiv or some other weapon to effectively put one down. In the end, taking out a lone infected, whether it’s a deadly clicker or one of the more human-looking, rush attack-prone standard infected, is usually a manageable situation.

Joel and Ellie’s advance through Lincoln eventually leads the pair to a seemingly empty building. A rope snare snags Joel’s foot as they approach, leaving him hanging upside down. Ellie rushes to help by cutting the rope attached to a refrigerator that serves as the snare’s counterweight, but then a horde arrives. One after another, infected charge in.

Trying to shoot charging enemies while you’re hanging upside down is more difficult than it sounds.  There is no auto-target or snap-to aiming in The Last of Us, so the cover-based pop-and-shoot rhythm of the Uncharted games doesn’t work here. You need to carefully line up your shot every time, even under sub-optimal circumstances. Infected that manage to close in trigger a quick time event in which you need to tap the square button quickly to push them back. This works well enough as a fallback until the clicker arrives.

Clickers stand out in a crowd of mutated former-humans. Their grotesquely warped heads are easy to spot, and they take more punishment than the less evolved infected. This particular clicker rushes directly at Joel. One shot doesn’t do it, nor does the second one. It takes four bullets to bring down these beasts. That may seem like nothing to a fan of shooters, but this is a game where you may only find four bullets in a entire level. Gunning down a clicker is a big deal.

Ellie manages to cut one rope after the first wave ends, sending Joel up out of reach but leaving her right in the path of the infected. A red cross appears over Ellie’s head whenever she is under attack. It begins to fill up, essentially serving as a timer to let you know how long you have until she dies, an automatic game over. The infected keep coming until Joel’s ammo is almost exhausted, but he manages to buy Ellie enough time to cut the final rope and, in doing so, end the second wave. The Last of Us is peppered with scripted moments of forced combat like these, but they are the exception rather than the rule.

With the threat temporarily halted, Joel and Ellie head inside and meet Bill, a crazed, vicious loner who takes an instant dislike to the mouthy young girl. He agrees to help his old friend rebuild a car, but only after Joel offers a cryptic and pointed reminder that Bill owes him. The first demo ends here.

The second demo steps away from the infected to focus on the threat that surviving humans post. As they drive into Pittsburgh, Joel and Ellie spot a wounded man in the street. Immediately recognizing the situation as an ambush, Joel hits the accelerator and rams right through as bandits emerge from their hiding places. He later tells Ellie he knew what was up because he has been on both sides often enough. This ambush sequence is the same one seen in one of the game’s earlier trailers.

The quick escape sends Joel and Ellie’s car spinning out of control, eventually leaving it a total wreck as the bandits close in. You can settle in here for a gunfight, but you’ll need to have plenty of ammo to take on this bunch. Again, we get a sense of how The Last of Us stands apart from Uncharted. Being shot staggers Joel, throwing off his aim and pushing him back, which in turn leaves him vulnerable to follow-up attacks. You also have to be mindful of enemies trying to flank you, especially when facing a group. Escape is always a better choice, especially if you can then sneak in behind your foes, take them out quietly, and make use of their scavenged resources.

Joel jumps through a nearby window and circles behind the bandits as they move in, watching as the break up to search for the wrecked car’s now-missing occupants. The bandits fall one by one to Joel’s melee attacks as he sneaks in on them. One of them manages to get the drop on Joel as he sneaks along – this is from the natural course of play, not a scripted moment – and Ellie acts quickly with a thrown brick, giving Joel just enough time to strike first.

Once the bandits are dealt with, Joel and Ellie set out to search the area. It is here that Joel offers a bit more background on his dark past, giving us a better sense of his character. He does what he has to in order to survive, including things that will probably make Ellie think twice about putting her fate in his hands.

As much as the two demos are meant to highlight Naughty Dog’s shifted approach to combat in The Last of Us, they also give us a sense of the philosophy informing the mechanics. Survival is key in this game; as much as it might resemble Uncharted, the play requires a more thoughtful approach. Combat is rarely the goal in The Last of Us; in truth, it is usually your unwelcome last resort.

The Last of Us is a physically beautiful game, with an imaginatively designed post-apocalypse and Naughty Dog’s trademark attention to detail. It is as much a thinker as it is a looker, however, laying out the personal story of Joel and Ellie and their constantly dubious survival prospects. Their struggles, however, will be PS3 users’ gains.

I used to be too scared to play horror games. Then I saw the light
The best PS5 controllers for 2022
Why you shouldn’t expect a PlayStation 5 Pro anytime soon
A modder has finally jailbroken the PS5, but there’s a big catch
The best Call of Duty: Warzone 2.0 weapons for Season 1
How to get all starters in Pokémon Scarlet and Violet
Black Friday: This MSI gaming laptop just dropped under $500
Evil West perks guide: best perks to buy first
How to evolve Pawmo into Pawmot in Pokémon Scarlet and Violet
Live now: Save $50 on the Microsoft Xbox Series S Digital Edition deal
‘Wordle’ today, November 24: Answer, hints, and help for word of the day (#523)
7 video game characters who deserve a Macy’s Thanksgiving Day Parade balloon
The best multiplayer games on Nintendo Switch