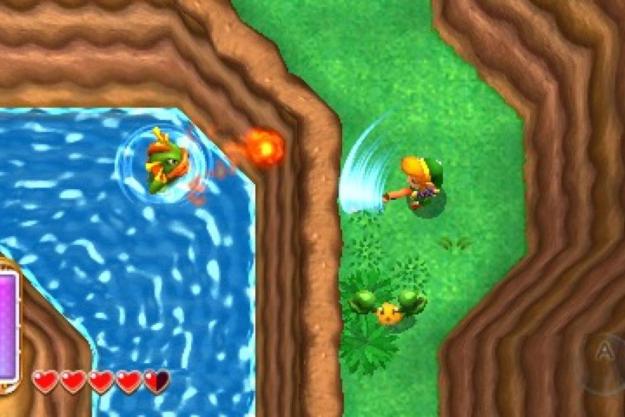 The Legend of Zelda: A Link Between Worlds
Score Details

“The Legend of Zelda: A Link Between Worlds feels better than anything else Nintendo has made since Wii Sports.”

Video games trade regularly in the familiar, but not in homecoming. Consider The Legend of Zelda series since 1991’s The Legend of Zelda: A Link to the Past. Even its immediate successor, 1993’s Link’s Awakening borrowed staple items like the boomerang, Link’s dash boots, and a familiar structure that had Link exploring a series of dungeons and saving the day. The format and tropes have been tweaked, re-imagined, and painted in a swatch of wild colors since, from the three-dimensional perspective warping of The Ocarina of Time to air-and-sea explorations of Skyward Sword and Wind Waker. Nintendo has been accused of repeating itself in the past, but it’s done an admirable job of using familiarity to ground players. It’s a mechanical tick, though. Nintendo does it for architecture’s sake, not to leave players feeling like they’ve returned to a place after being away for a long, long time.

The Legend of Zelda: A Link Between Worlds is a remarkable work of homecoming.

The Legend of Zelda: A Link Between Worlds is a remarkable work of homecoming. It recreates the world of A Link to the Past not identically for a nostalgic thrill, but as a place subtly changed by the passage of time. Turning this game on feels like walking through your hometown after years away; everything’s different, everything’s the same. As a result of its landscape, it’s difficult to talk about this game in a vacuum, independent of its predecessors. By looking backwards, though, Nintendo has created its most forward thinking entry in the series in 20 years.

Picking up a few generations after A Link to the Past, the bucolic kingdom of Hyrule is doing pretty well for itself. Princess Zelda rules over a relatively peaceful kingdom that, barring some squirrely mermen that like spitting fire and pedestrians, has recovered nicely from the olden days when pig-faced demons tried to take over. Link, our green-suited hero, is a blacksmith’s apprentice who lives nearby the castle.

One day, when Link is sent out to bring a knight his freshly forged sword, he stumbles on the knight along with the local church caretaker’s daughter getting turned into paintings by an evil wizard. Thus begins Link’s latest quest to save Hyrule, stop that painting-obsessed wizard Yuga from resurrecting the old pig monster Ganon, and also save his homeland’s mirror image, the weird world of Lorule.

As grand as that all sounds – not to mention incredibly similar to 2006’s The Legend of Zelda: Twilight Princess – A Link Between Worlds actually doesn’t spend much time on scripted theater. Big story moments are few and far between outside of the game’s introductory hours, and while the stakes seem high in theory–imperiled princesses, ancient evil, end of the world, etc.–the bad guy’s motivations are pretty tame. Ganon wanted all of existence to become a reflection of his evil heart in A Link to the Past. Yuga just wants Ganon’s power to make himself beautiful in A Link Between Worlds. The Dark World Link was stranded in the old game in a place where treasure hunters were turned into living trees and wretched monsters. Lorule sort of looks like the Dark World, but it has a baseball diamond too.

That A Link Between Worlds doesn’t feel as epic in the literary or dramatic senses as other games in the series is actually a good thing. Your time as Link feels more intimate and personal since most of your time is spent exploring the countryside, diving into caves for treasure and meeting up with some of the lands’ more eccentric residents. The best story in this game isn’t in confrontational cutscenes, but in the moments when you survived a fight by the skin of your teeth, or found a hidden glade behind the blacksmith’s house.

Part of what makes the personal experience of exploring so rewarding is how ingeniously laid out the world is. Hyrule and Lorule are, at first glance, just the way they always were, with the landmark dungeons like Tower of Hera and Swamp Palace in identical locales. It’s not all the same, though. All the dungeon interiors are redesigned as expected, but it’s more than that. That island where the Great Fairy used to live is now an enormous windmill castle. The old lumberjack cabin by the Lost Woods in the northwest is now home to a miner. There is, as previously mentioned, a bona fide baseball field sitting in the middle of Lorule rather than a field haunted by a dead flute player.

The grand effect is that feeling of coming home. For old players, stumbling into these transformed locales elicits an automatic comfort and curiosity, inviting you to push at the game’s boundaries to see what’s different and new. For neophytes playing Zelda for the first time, the effect goes in reverse. Here is a smartly designed place that’s inviting to play in, and that will recontextualize an inevitable Virtual Console release for A Link to the Past. Nintendo took an impressive risk mimicking an old landscape in a medium so obsessed with newness, and its efforts are rewarded.

Further facilitating that air of instant, visceral connection with the world is how smooth A Link Between Worlds plays. Five minutes with the game and it’s hard to believe that the tutorial-obsessed Nintendo of the past 15 years is behind it. Link moves quicker than he ever has in the past, and navigating the game’s maps and item menus is equally swift thanks to the 3DS touch screen. None of that would matter if the game was constantly interrupting to explain its tools or challenges, and that just doesn’t happen.

That A Link Between Worlds doesn’t feel as epic… as other games in the series is actually a good thing.

After the first few minutes, Worlds never stands in your way. Run into a random cave where you see a giant 100-rupee gem on a far away platform? Figure out how to get to it on your own, the game won’t tell you. Don’t know how to lift heavy rocks? That Power Bracelet is out there, but you won’t find it in a dungeon already littered with rocks. Most items are available for purchase–the prices are steep, but you can rent them cheap with the threat of losing them upon death. This economic twist makes both life and money valuable in a Zelda game for the first time since the NES original.

Rather than create artificial boundaries like having a fairy explain every last detail of the game or tying the game’s arsenal of helpful tools to a specific dungeon of rigid puzzles, Worlds lets you wander and experiment. For a game that puts so few walls between player and game, it’s funny that its other big twist on play involves literally merging with walls. By just tapping the A button, Link can sink into any flat wall in the game, turning into a painting so he can walk between cliffs, navigate through the bars of a prison, or ride a moving platform that’s too tall to climb on top of. Most puzzles in the game are primarily tricks of perspective. How do I use these walls to get where I want to go? Those puzzles are devious and delectable to solve, especially later on when they require you to slip between cracks in the world, traveling between Hyrule and Lorule to reach seemingly inaccessible peaks and valleys.

The Legend of Zelda: A Link Between Worlds feels like no other Nintendo game has in a long time. It feels trusting of the player, welcoming exploration and experimentation, and it’s not bogged down with concern that someone will somehow be confused or put off when they need to figure something out for themselves. In turn, it gives them the tools, seamless controls, game items, and skills to freely explore that world and make their own adventure in the process. As delightfully intuitive as its NES and SNES classics while also utterly modern thanks to its mix of 2D and 3D design with both button and touch screen controls, A Link Between Worlds feels better than anything else the Nintendo has made since Wii Sports. It feels like coming home.

This game was reviewed on a Nintendo 3DS using a code provided by Nintendo.