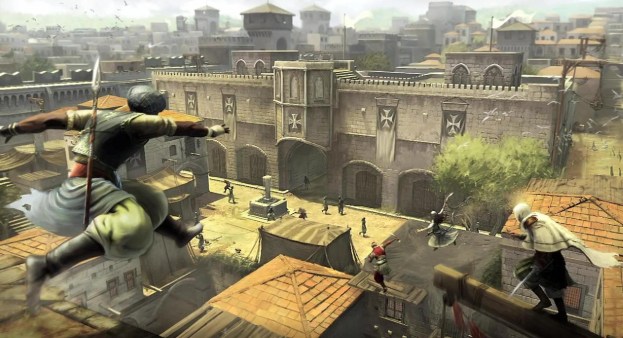 One of the longest and most storied rivalries in the NFL is that between divisional and geographic rivals, the Green Bay Packers and the Minnesota Vikings. Ubisoft decided to tap into that rivalry in order to celebrate the newest installment in its video game franchise that has sold over 30 million copies worldwide, Assassin’s Creed: Revelations. B.J. Raji, nose tackle for the defending Super Bowl Champion Green Bay Packers, recently faced off against Minnesota Vikings’ running back Adrian Peterson in an online multiplayer session, with a handful of teammates, across PlayStation Network in preparation for the game’s big launch last week. Adding to the drama was a pending match-up between the two teams, as they were scheduled to play on November 14’s Monday Night Football game.

“Assassin’s Creed: Revelations is great, man,” said Peterson. “It gives you a whole different aspect to the game. You have an opportunity to live out a fantasy, as far as being an assassin, and you get to visit different places and time periods. The game is so realistic, just with all of the action and the details in the levels. It’s a great franchise and a great standalone experience.”

While Raji is a fierce competitor on the field and in the video game arena against Peterson, he agrees with the running back on Revelations.

“I like Assassin’s Creed games. I think just the different variety of things you can do sometimes in the game are cool. You’re kind of on your own as far as the tasks, either if it’s hiding or killing,” Raji said. “Sometimes you’re on a team and it’s your guy’s obligation to trap the enemy and get him into a certain kind of situation, and sometimes you can only run, and I like that. How often do you get to be an assassin in a game and it’s alright to assassinate people and kill them? That’s probably the most enjoyable part about the game.”

Peterson, heralded as one of the most promising and powerful running backs in professional football, is one of only five players to have ever amassed 3,000 rushing yards after his first two seasons in the league. He also holds the third highest average  for rushing yards per game in professional football history, joining the ranks of other legends, including Jim Brown and Barry Sanders. He’s not bad at video games, either.

“Video games are pretty popular on the team,” Peterson stated. “I’m not the biggest gamer on the team, but the games that I do play that I keep in my room are Madden, Assassin’s Creed, God of War…games definitely have their place here. The guys who are huge gamers on the team are Chris Kluwe, he’s like an ultimate gamer, Joe Webb is a big gamer too, and so is Toby Gerhart. These guys and their skills are amazing.”

“I’ll say for the most part, games are popular on the Packers. I can’t really say that everyone likes to play them, but generally a lot of guys like to play,” Raji opined. “It’s a good way to unwind, relax and take your mind off of football while still having a good time.”

The PS3 game (which is also available on Xbox 360 and will hit the PC on December 2) allowed the star tackle a chance to duke it out with the elusive Peterson off the gridiron.

“I think it’s just the whole point of you not wanting to lose. You see on the left hand corner of the screen there’s some rankings, and I think you want to be in the top two depending on who’s playing, but sometimes it doesn’t always happen,” Raji said. “But you want to be in the upper echelon with rankings.”

And just like on the real field, there was some trash talk going on across the PSN during the competition.

“Like most good competitors you have your choice words, but you want to try to keep it in the proper frame and I think I do a good job at that,” said Raji.

Both Raji and Peterson grew up playing video games and like to play during their free time.

“I grew up on the Super Nintendo, Nintendo, Sega, and as technology progressed then I upgraded my systems accordingly. I play the typical sports games, Madden, NBA 2K, but I like this Assassin’s Creed: Revelations. It stands out to me because of the time frame,” Raji stated. “A lot of those war games, army games are kind of traditional with the weapons, but I think you’ve got different weapons that you don’t see on most games.”

“When I was younger I probably played Zelda more than any other game,” Peterson recounted. “I just remember my mom coming in late at night, twelve o’clock or one o’clock in the morning and I got good at turning the TV off fast. Sometimes I got away with it. Sometimes I got caught and she’d turn the game off and take it out of my room. But I loved that game and I’d always try to bring it back in and play it, even on school nights.”

In addition to playing Assassin’s Creed: Revelations, Peterson will be checking out Link’s latest adventure with The Legend of Zelda: Skyward Sword.

“I’m definitely getting it because I haven’t played it in a long time. Just looking at the commercials and things like that, I think about the experience I had with those games at a young age,” he said. “I know it’s going to be exciting.”

But for now his focus is on Assassin’s Creed: Revelations. And although he hasn’t been to Italy yet, Peterson said he definitely plans on going, and he’s been doing some sightseeing through the Assassin’s Creed games as part of his preparation. The current game is set primarily in Constantinople during 1511, while the previous two games have been set in Renaissance Italy beginning in 1476.

“I really get a sense of how it is over there from playing these games,” he said. “Once I go and actually take a trip there, I will be able to experience it and everything.”

Assassin’s Creed: Revelations is the latest stereoscopic 3D game from Ubisoft, and the first Assassin’s Creed title to take the leap to the third dimension, and it is a move that Peterson fully supports.

“That would be amazing to experience. To play the game and have it in 3D would give a real feel for it. The higher the graphics, the more you’re able to enter these games and to be able to get it in 3D and have that experience is going to be outstanding,” he said.

When the swords were sheathed and the PS3s were turned off, Peterson and his team walked away with the win.

“I appreciate my boys Gerhart, Webb, Kluwe, and Brown having my back against the Pack,” Peterson said after the virtual victory.

Gamers are now able to explore Renaissance Italy and the final adventure of Ezio Auditore following the release of Assassin’s Creed: Revelation November 15 (You can read our full review here). And while Peterson and his Viking teammates may have walked away with the victory, Raji and the Pack got their revenge under the Monday night lights, when the Packers defeated the Vikings 45-7.

The next Assassin’s Creed is an upgraded Valhalla expansion