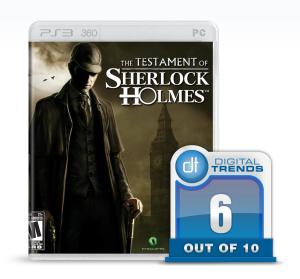 In November of 1887, Sir Arthur Conan Doyle published a story in the British magazine Beeton’s Christmas Annual dubbed “A Study In Scarlet.” It would be the first appearance of Doyle’s most famous character, the detective Sherlock Holmes, and as a result would go on to set the stage for one of the most enduring figures in modern fiction.

Holmes, for the non-existent subset of readers that aren’t immediately familiar with the character, is defined by his almost superhuman powers of deduction. Show the man a dirty walking stick and he’ll rattle off the name of its owner, his profession, and what sort of soil he had recently been strolling through, merely by observing minute facts about the stick. This would be an impressive character trait by itself, but what makes Sherlock Holmes so enduring is that all of his deductions follow a relatively simple path of logic that makes perfect sense once the story explains how Holmes was able to figure things out so quickly. His appeal, it seems, is that Sherlock Holmes is simply a normal human, with no supernatural abilities, who just happens to be really, really excellent at his job.

Though Doyle may not have known it at the time, he was creating a timeless icon in Sherlock Holmes, and it should come as little surprise that the character has remained relevant to modern audiences for the entirety of the past 125 years. Before his death in 1930, Sir Arthur Conan Doyle wrote four novels and 56 stories featuring the character, but fans just can’t seem to get enough of the detective’s adventures and he’s appeared in hundreds of tales since that time. Tales like The Testament Of Sherlock Holmes, an adventure game created by French developer Frogwares, and the subject of today’s review.

In almost all regards, The Testament Of Sherlock Holmes is a pretty standard adventure title. You’ll spend a lot of time in the game walking through rooms, examining every icon that you can possibly interact with, and attempting to match your wits against the developer’s sense of logic. Unlike classic adventure games however, The Testament Of Sherlock Holmes is a fully 3D, modern console title with at least some of the accoutrements you’d expect that to entail.

That said, The Testament Of Sherlock Holmes is not what I’d describe as “thoroughly modern.” It’s not out of place on an Xbox 360 or PlayStation 3, but when compared to any of the major titles released in either this year or last, the game’s aesthetics are simply not up to snuff. I’d expect to see character animations and texture work like this in a game from 2008, but in 2012 they stick out like a poorly-rendered sore thumb. Don’t get me wrong, they’re all serviceable, but there’s nothing in this game that will make you sit up and take notice of your gorgeous surroundings.

Normally that would be a big strike against the game, but in the case of The Testament Of Sherlock Holmes I can understand why the game isn’t as gorgeous as, say, the next Call Of Duty sequel. Frogwares, the game’s developer, is not only a relatively independent studio from France, they’re also far more accustomed to publishing games exclusively for the PC. Additionally, The Testament Of Sherlock Holmes was initially scheduled for release in 2010 before unexpected delays pushed its release a full two years into the future. While my job dictates that I can’t entirely forgive the developer for the game’s aesthetic shortcomings, I can point out that its inability to directly compete with major, blockbuster gaming studios should be a given. If you really expected this game to be gorgeous, you’re either delusional or completely misunderstand how the gaming industry functions.

Remember when I mentioned that Frogwares titles usually appear only on the PC? That’s important, as it seems quite apparent that the PC was seen as the key platform during the development of The Testament Of Sherlock Holmes. Everything from the game’s style of play to its menu system seem like things that would work better on a computer. While Frogwares did a pretty competent job of adapting the game’s controls and options to better suit a modern console, prospective players should know that the Xbox 360 version of this game seems like an afterthought, at least as far as baseline functionality is concerned.

Despite all that though (and likely owing to the relatively simple conventions of the adventure game genre), The Testament Of Sherlock Holmes is entirely functional. I don’t want that last paragraph to scare people off (at least not before I get to the next section of this review), so please know that even with the game’s obvious rough edges, it is without any crippling issues. Is it odd that a modern video game like this doesn’t include an autosave option, and that players are only given four manual save slots? Absolutely, but for the vast, vast majority of people, the systems in place here just work. This foundation may not be anything spectacular, but it’s enough to convey the game’s story, and that’s where The Testament Of Sherlock Holmes really shines.

The most impressive aspect of The Testament Of Sherlock Holmes is that it isn’t based on a tale written by Sir Arthur Conan Doyle, yet still manages to capture the spirit and tone of his novels almost exactly. As a fan of the original Holmes stories (and a massive fan of the BBC’s recent, phenomenal series Sherlock), I wouldn’t place it among the greatest stories the character has ever played a part in, but that shouldn’t be seen as a slight toward the game so much as praise for Doyle’s work. There is a good reason why this character has endured for over a century, and that appeal is on full display in The Testament Of Sherlock Holmes.

In The Testament Of Sherlock Holmes, you play as a combination of the titular detective and his partner, Dr. John Watson. Though the cases start out rather simply — “simply” in this case means that the first mystery you must solve involves a monkey stealing a priceless necklace and nearly lighting a house on fire — the game quickly turns into a complex web of mysterious events that cause the people of London to lose faith in the detective. Before the game comes to a close you’ll be accused of nearly all the crimes you’re attempting to solve, and only by proving your innocence can you bring the game’s shadowy antagonist to justice.

That’s a relatively standard set up for an adventure game, but it allows the developers of The Testament Of Sherlock Holmes to explore almost every notable aspect of the game’s lead character. Long-time fans of Sherlock Holmes will find that this game is utterly drenched in fan service, from Holmes’ iconic deerstalker cap, to his dependence of cocaine, The Testament Of Sherlock Holmes offers an intensely well-researched portrait of its protagonist and demonstrates the affection that the game’s developers have in abundance for Sir Arthur Conan Doyle’s most famous creation.

While this history lesson is quite helpful, the true crux of the game revolves around solving mysteries that are initially baffling. To do so, your character must explore every nook and cranny of his environment, interacting with notable objects and occasionally examining them in closer detail as fully rendered 3D objects. There’s nothing here that you haven’t seen in dozens of adventure games before, but aside from the recent Walking Dead episodic series from Telltale Games, The Testament Of Sherlock Holmes is as user-friendly and well-designed as any recent adventure title.

Unfortunately, and though this type of game design explicitly demands that it be played a certain way, The Testament Of Sherlock Holmes doesn’t quite grant players the feeling of actually deducing facts from otherwise baffling stacks of evidence. In effect, you can play through this game entirely by wandering aimlessly and clicking on anything that lights up. Things will move much faster if you pay attention to the clues presented by the game, but if you’re lazy or just uninterested, there’s no real need to assume the role of “detective” for this title.

Oddly, that doesn’t really detract from the experience (which is good given that I can’t come up with a viable way to accurately mimic Holmes’ uncanny ability to solve crimes in a video game). If anything, it feels like the gameplay mechanics are merely there because they add some sort of interactive element to what is otherwise a fantastic story. Holmes fans will adore the twists and turns in this game (and, likely, Holmes’ resemblance to famed actor Basil Rathbone), and to be totally honest with you that should have been the key selling point for The Testament Of Sherlock Holmes.

The Testament Of Sherlock Holmes is objectively not a great game. On almost every technical level it is overshadowed by other modern releases, and even on the PC, where its quirky design should feel more at home, it wouldn’t appeal to anyone who demands that all games use the absolute cutting edge of graphics technology. However, this game isn’t really aimed at the mainstream audience. Instead, it’s an obvious love letter to the character of Sherlock Holmes that pays him homage by crafting an excellent adventure akin to those that initially made him famous.

While this tale may have worked better in literary form, the minor technical failings of The Testament Of Sherlock Holmes should not be seen as enough to deter any Holmes fans from enjoying this story. If nothing else, this should serve as a perfect way to get your fix of the classic character during those periods where American fans have to wait months for new episodes of the aforementioned BBC series. In that regard, it’s a stunning success, even if it fails in many others.

(This game was reviewed using an Xbox 360 copy provided by publisher Atlus.)

The best upcoming PS5 games: 2023 and beyond
The best PSVR games for 2023
Shoulders of Giants brings mascot-era nostalgia to the roguelite genre
Xbox and Bethesda’s Developer_Direct: how to watch and what to expect
Goldeneye 007 comes to Game Pass and Nintendo Switch later this week
The best iPhone games in 2023: 31 games you need to play right now
I can’t believe I’m recommending Forspoken on PS5 over PC
Redfall’s May 2 release date revealed during Developer_Direct
The best Fire Emblem games, ranked from best to worst
Xbox just surprise announced and released a stylish new Game Pass title
The Elder Scrolls Online’s 2023 updates bring players back to Morrowind
How to cheat in Words With Friends
Like a Dragon: Ishin’s Trooper Cards are full of cameos, including Rahul Kohli