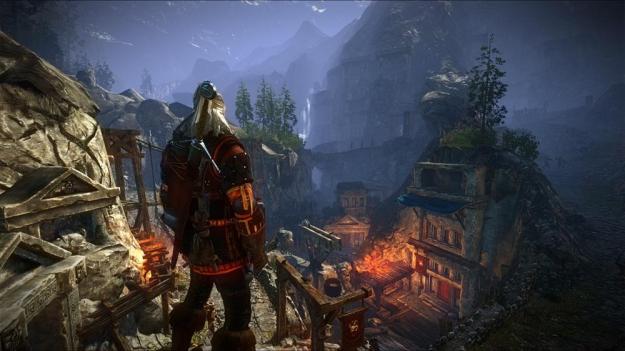 You’ve been waiting all week for this. It’s Saturday now. Your work week is finished. This is the perfect day to dive in hardcore with some serious RPG gaming. The Witcher 2: Assassins of Kings Enhanced Edition is freshly out on store shelves, which means that console gamers everywhere finally get to see why the PC version of the game was one of the highest-rated releases of 2011. The Witcher 2, even prior to this Enhanced Edition, is a freaking huge game. There’s a lot of lore to pick up on, a credit to the imagination of Polish author Andrzej Sapkowski, who wrote the Witcher books on which the two games are based. There’s a lot of game too.

The Witcher 2 is familiar in some ways as a mostly open world fantasy RPG, though there’s nothing run-of-the-mill about it. The PC release scored such high marks because the game hits on pretty much every cylinder. Don’t take my word for it; check out Earnest’s glowing review instead to hear more about why the game rocks and what’s new with this “Enhanced Edition.” If you’re reading this right now, then you’ve already got the game and are looking for tips on how to make your way and survive as a newcomer. See, The Witcher 2 has a bit of a learning curve. In addition to the usual RPG trappings, there’s a complex and frequently challenging combat system to master as well as any number of additional activities you can engage in to make your time in Temeria go a little easier.

Going Back to School

One of the big criticisms directed at the original PC release of The Witcher 2 was that it didn’t have a tutorial. The prologue portion of the game introduces many core concepts, but there was nothing geared entirely around showing you how to play and what to do. A discrete tutorial was later added in a major update, and that same tutorial is included in the console release.

My advice to you: play through the tutorial. Seriously. You will learn things there that the game will not otherwise fill you in on in any obvious way. Like what the advantages of potions are and how you go about making them. How you go about finding ingredients. You’ll learn about all facets of combat, and get to sample abilities that you would otherwise not get to try out without investing points in them. It’s impossible to unlock every one of our hero Geralt’s skills, which means you want to be tailoring what you invest in to your particular style of play.

On top of all of that, the tutorial concludes with a multi-round combat encounter that gives you an opportunity to freely test out all of the skills you’ve just been shown. You will most likely die, but stick with it. How quickly you die determines which difficulty level the game recommends that you play it. I advise you to heed that recommendation; you can always change the setting at any point during the main game.

One thing that newcomers might have a tough time getting used to in The Witcher 2 is the pacing. In most open world RPGs, you get a brief little intro section and then the world is laid out before you. Sometimes sections of it are blocked off for one reason or another, sure, but the basic pattern of introduce the story/learn the mechanics/set you loose is very common. It’s the same in The Witcher 2, except the introductory prologue is much more drawn out. You’re going to have a bunch of conversations. You’re going to jump around in time a bit–and play through more than one flashback–before you catch up to the present… for more introductory linearity.

It’ll be a few hours before you are deposited into a part of the world where you can really start to run around and explore. Stick with it, and pay attention. Not only does the wait pay off, but there’s actually a well-written story being told here. Knowledge of the events of the first game, and of the universe as a whole, isn’t necessary. But it helps. Fortunately, there’s a Witcher Wiki that is well-equipped to answer any questions that you might have.

Quen: The Only Spell You’ll Ever Need

Ok, fine. It’s a bit of an exaggeration to say that the game’s Quen spell is the only one you’ll ever need. The others are useful as well, particularly the flame-spewing Igni and the Force push-like Aard. Quen is your best friend though. Cast it and you’ll take a dramatically reduced amount of damage from enemies for a short period of time.

I can’t really overstate how helpful, and even necessary, that is. Especially in the early portions of the game, when Geralt feels like the polar opposite of the badass monster-killing Witcher that he’s supposed to be.

Magic use in The Witcher 2 is governed by your Vigor meter. It refills on its own reasonably quickly, even at its base level before you put skill points into improving its regen rate. You’ll still usually run out of Quen protection before the gauge recharges, however. The important thing to keep in mind is that running around in circles so that your enemy can’t hit you while Vigor recharges is a perfectly acceptable strategy in The Witcher 2. It’s one that you can and should exploit whenever the need arises.

Spending skill points in The Witcher 2 is initially straightforward, as you’re limited to the Training tree until you’ve invested your first six points there. Definitely put at least two of those points into leveling up Vigor Regeneration and another two into Fortitude (necessary for regenerating Vigor in combat). For your third training skill — you’re putting two points apiece into each — your best bet is probably Hardiness, as it ups your health.

Once the other three training tiers open up, your first choice should be obvious: if Quen is the game’s most important spell, then it stands to reason that it’s also the thing you’ll want to boost first. So do that under the Magic tree. Beyond that, the choices you make should be largely based on how you want to play. You won’t be able to level up everything, so it’s really a matter of figuring out what the best fit is for you. Personally, I’m not a huge fan of alchemy — potions help, but not as much as swords and magic do — and so I would recommend avoiding that tree. You’ll still get to take advantage of potions, they just won’t be as potent. What’s more, the less emphasis you put on brewing up magical concoctions, the more free you are to sell those ingredients for a tidy profit.

There are two viable options for increasing Geralt’s net worth as you play: selling crap and stealing crap, which you then turn around and sell. Let’s focus on the latter first. While there are plenty of choices to be made throughout The Witcher that dramatically alter the course of unfolding events, there’s none of that morality stuff built in around Geralt’s helpfully sticky fingers. Watch out for on screen prompts to search containers or collect items left lying around. Grab everything that isn’t nailed down. Be aware too: a lot of stuff isn’t nailed down. Explore every unlocked door you find, even if it’s someone’s home, and search any containers you find there. Don’t worry. The residents won’t mind. They won’t even notice.

Once you’ve filled you inventory with stuff that belongs to you under the age-old law of Finders Keepers, sell it. Sell it all. Sell like you’ve never sold before.

There’s a lot of money to be made from alchemy ingredients in particular, so just dump them all unless you plan to brew some potions. Anything that appears in your inventory under the Junk heading can automatically be sold; it’s got no value otherwise. Pawn off your old weapons and armor. Read books, and then sell them. Just make sure you hang onto your crafting schematics — they need to be in your inventory or the item cannot be crafted — and your crafting materials. That is, of course, in addition to whatever weapons and armor you’re using. Lose the rest. Don’t sell those. You need them to stay alive while killing things.

CD Projekt Red isn’t slowing down, for better or worse

Everything we know about The Witcher 4

How to earn more gold in The Witcher: Monster Slayer

The Witcher Monster Slayer: 10 essential tips and tricks for the best Witcher experience