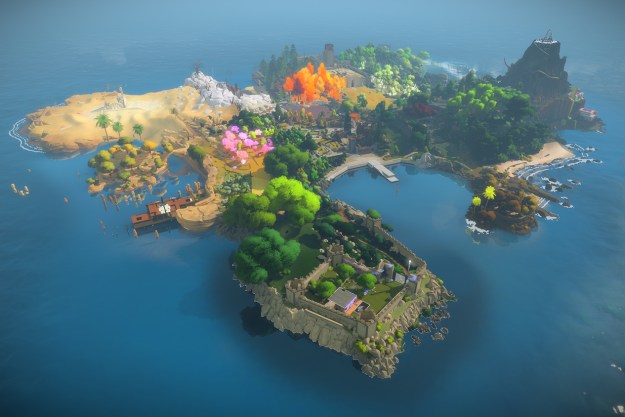 “The Witness is one of the best exploration puzzle games since Myst.”

Myst kicked off a new wave of adventure games in 1993, and its influence on modern game design is undeniable. Known for its distinctive otherworldly setting and effective use of pre-rendered video, Myst challenged players to explore every inch of their surroundings and solve esoteric puzzles while piecing together a backing narrative. As the adventure game genre evolved, however, Myst‘s faults overshadowed its achievements. Many criticized its overwrought and nonsensical puzzles, which bogged down its central exploration elements and soured its sense of mystery.

The Witness, the latest game from Braid creator Jonathan Blow, aims to recreate Myst‘s successes while avoiding its missteps. The result is a deeply enthralling game that rewards logic, exploration, and patience, and it’s one of the PlayStation 4’s most fascinating releases to date.

Like Myst before it, The Witness takes place on an abandoned island that players explore from a first-person perspective. After escaping from an introductory gameplay area, players discover a vast open world filled with snaking, interconnected pathways that are unlocked by solving puzzles.

Puzzles in The Witness consist of a series of electrical panels scattered throughout the abandoned island. Upon activating one of these panels, players must draw an unbroken line through a maze of twisting circuits, tracing a path from entrance to exit while fulfilling unspoken requirements unique to each puzzle.

While the puzzle mechanics themselves are simple, solutions often require experimentation and exploration. The Witness conceals the bulk of its puzzle solutions within its environments, and players must often search for subtle patterns or inconsistencies within their surroundings in order to progress.

The best puzzles in The Witness demand a combination of exploration and logic. Solutions are rarely obvious, and the game’s lack of hints or tutorials makes puzzle-solving a difficult and mentally taxing process. This difficulty actually works to the game’s advantage; by giving the player so little guidance, The Witness effectively turns every puzzle’s solution into an epiphany, making gameplay incredibly satisfying.

Some puzzle sequences have a better sense of pacing than others, however. One especially tiresome stretch of gameplay involves creating walkways that unfold, tile-by-tile, for every puzzle solved. If you’re unable to solve any of these puzzles, your progress is blocked until you can brute-force a solution. Hitting a sudden roadblock after solving dozens of these puzzles in a row is frustrating, and knowing that several more difficult puzzles await after devising a particularly hard-fought solution is demoralizing.

Fortunately, these moments are rare, and The Witness’ open-ended design encourages players to abandon in-progress puzzles and return to them later. Many of the riddles you’ll encounter require solutions learned by exploring elsewhere, and several areas feature back-to-back puzzles that serve as instructions for solving specific maze layouts seen later in the game. This effectively gates player progress while reinforcing the puzzle-solving skills you’ll learn throughout.

By the end of The Witness, you’ll approach puzzles very differently than how you might have approached them at the game’s outset. Where other games might reward progress with new character abilities or weapons, The Witness instead arms you with new puzzle-solving strategies. As you progress and your puzzle-solving vocabulary grows, the process becomes less experimental and more intuitive, making for a constantly evolving gameplay dynamic.

While the parallels between The Witness and Blow’s previous project Braid are not immediately apparent, they both take a similar approach to mechanical depth. Both games feature a simple core mechanic that grows in complexity as gameplay progresses, challenging players to use the knowledge they’ve absorbed from previous puzzles in order to tackle new challenges.

Often, solutions in both games require an extra bit of lateral thought to continue; Braid explored the limits of traditional platforming mechanics, while The Witness takes a similar approach with puzzle design. Ultimately, The Witness explores its mechanics to a greater depth than Braid did, and it’s much more satisfying as a result.

Did you hear that?

The Witness‘ audio matches its excellence in mechanical design, for the most part. Environmental sound effects and mood-setting tones accompany the player throughout, giving the game a meditative feel. It’s easy to underestimate just how great a role audio plays in The Witness, but in reality, a lot of thought was put into something as minor as how the player’s footsteps sound when walking across different types of terrain. You’ll hear appropriate and varied sound effects depending on whether you’re walking across dirt, grass, rocks, or planks, making your wanderings that much more absorbing.

The game’s audio is very quiet by default, however, making it difficult to hear key details without boosting your TV or stereo system’s volume significantly. One puzzle in particular requires the player to listen for subtle audio cues – something I would not have noticed if I wasn’t wearing headphones while playing. Subtitles also prove inadequate. On-screen dialog does not properly sync up with speeches delivered via audio logs, making them difficult to follow, and closed captioning is not available for important environmental sound effects. In its current state, The Witness may be unwinnable for players who have hearing disabilities.

Quirks aside, The Witness is a remarkable achievement. Its setting is lush and vivid, and its core puzzle-solving gameplay is intuitive without the need for instructions or tutorials. Developing a vocabulary for puzzle-solving in The Witness is very satisfying, and its abstracted approach to puzzles eliminates the directionless ambiguity that made Myst difficult to enjoy.

The Witness is immersive, taxing, enlightening, cathartic, deeply frustrating, ultimately rewarding, and you’ll love every minute of it.

This game was reviewed on PlayStation 4 with a copy provided by the publisher. It’s also available for PC and will set you back $40 upon its release Tuesday, January 26.