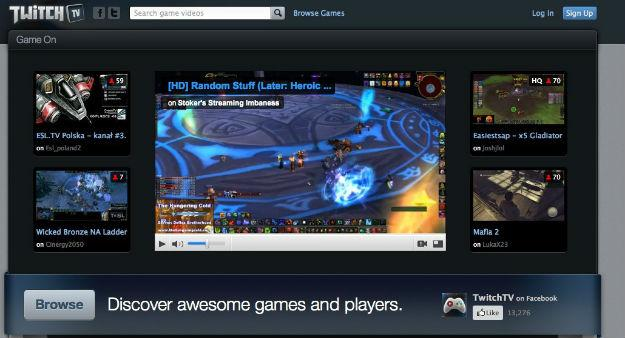 Twitch continues its 2013 expansion with Twitch Turbo, a new paid subscription service to its streaming video game television service. Subscribers to Twitch Turbo will be able to watch eSports matches free of advertising as well as receive additional perks like custom community tools (chat text colors, etc.) and priority customer service. The service will cost $8.99 per month, a relatively high price compared to other streaming entertainment services. Netflix by contrast is just $7.99 per month. Since Twitch’s audience has grown from 16 million to 23 million subscribers in the past nine months, it’s easy to understand why the company is interested in ramping up monetization.

“The average viewer watches over an hour and a half of videos each day,” explains Twitch CEO Emmett Shear, “Over two-thirds of our logged-in users chat each day. We wanted to find a way to provide the ultimate Twitch experience.”

Twitch Turbo represents the second significant expansion for the streaming eSports company. On Wednesday, Twitch announced that it had partnered with Activision Blizzard to bring its game broadcasting tools to home consoles starting with Call of Duty: Black Ops 2. Xbox 360 owners have access to tools that let them upload Black Ops 2 play, commentary, and webcam footage seamlessly. The service will be available on Sony’s PlayStation 3 soon as well.

The crossover in audience between Twitch and Call of Duty is strong enough to support Activision’s decision to partner with the service, but that crossover should also give insight into the potential of Twitch Turbo. Parting that audience from its money is no easy task. While Call of Duty games like Black Ops 2 earn $1 billion in revenue within weeks of release, those players are reticent to spend more on additional services. When Activision opened the Call of Duty Elite service in 2011, 10 million players signed up but only 2 million agreed to pay the $50 per year fee. By the end of 2012, Call of Duty Elite was forced to become a free service.

Call of Duty Elite and Twitch Turbo are more similar than they first appear. Both premium subscription services were based around adding value through small perks and preferential treatment and appealed to similar audiences. At $108 per year, Twitch Turbo is a more expensive proposition than Call of Duty Elite. The service will be an interesting experiment for Twitch but it is not a guaranteed source of new growth.

Topics
2023 could be PlayStation’s most radically reinventive year yet
2022 was excellent for sports games, depending where you looked
Our most anticipated PlayStation 5 games of 2023
Xbox Series X tips and tricks: how to set up your new console
How to connect an Xbox controller to a PC
GTA 5 cheat codes and secrets for PS4, PS5, Xbox, and PC
WWE 2K23: release date, editions, pre-order, and more
Despite divisive dialogue, Forspoken gets a lot right about open-world games
The best RPGs for the Nintendo Switch
How to link your Fire Emblem Engage and Fire Emblem Heroes account
Xbox and Bethesda’s Developer_Direct: how to watch and what to expect
Goldeneye 007 comes to Game Pass and Nintendo Switch later this week
The best iPhone games in 2023: 31 games you need to play right now